I have taught Women’s Gender and Sexuality Studies since 1994, and one recurring comment from white students is that I don’t “look” like a feminist. I find it amusing. I pretend to be confused and politely ask, “What does a feminist look like?” Their response is usually, “Less feminine.”

This is a teachable moment.

When I was an undergraduate at the University of Pennsylvania between 1987 and 1991, I was mentored by Professor Evelyn Brooks Higginbotham. She was finishing her groundbreaking book “Righteous Discontent,” in which she argues that the politics of respectability enabled Black women to counter racist images and structures. She stated that this aesthetic of respectability should not be misconstrued as mindless mimicry of white behavior or a “front” without substance or content. Instead, the politics of respectability assumed a fluid and shifting continuum of African American resistance.

Fast forward to 2013. The reality is that when you think of a college professor, you probably do not see the image of my face. My insistence on professional dress (i.e., skirts, heels and ironed shirts) is not a subscription to patriarchy; I want to be recognized and respected. Informality, for a Black woman, can be professionally harmful.

In a racist society, white people hold the power of the “gaze,” and people of color are subject to interpretation. 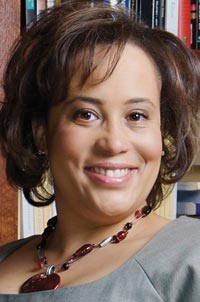 I wear what I wear because I take myself seriously and I expect you to, also. I don’t have the privilege to “dress down.” When white women do this, they are read as earthy, edgy and intellectual. When Black women dress down, we are read as “The Help.”

I share this because my white female students feel entitled to judge my cisgender, heteronormative, feminine aesthetic; not understanding that many Blacks are proud that I don’t wear a uniform. I find that the Black service people at Macalester are glad to see a dressed up Black woman on the faculty.

Once again there is a historical context for this. In “Living In, Living Out,” Elizabeth Clark-Lewis narrates the personal experiences of 81 Black women who worked for wealthy white families. These women describe how they encountered – but never accepted – the master-servant relationship, and they recount their struggles to change their status from “live in” servants to daily paid workers who “lived out.” One of their biggest acts of resistance was to do the cleaning in their own clothes, not a uniform, and leave.

I am writing this essay in the midst of the George Zimmerman trial. I have been traumatized by the treatment of Rachel Jeantel, a friend of Trayvon Martin. The best analysis I have read of why many people could not hear her was because of what they saw.

Regina N. Bradley writes, “Jeantel’s … inability to conform to expected cultural and aural scripts of Black womanhood within the confines of the courtroom – the epitome of a hyper-respectable space – destabilizes not only racial paradigms of Black (southern) respectability but Americanized expectations of Black women’s scripts of respectability.”

I was not ashamed by her inability to conform; I was disappointed that in 2013 she isn’t read as “respectable.” I look forward to a time when Black women will have the freedom to wear what they want to wear, speak how they want to speak and still be taken seriously.

But until then I will dress up for Rachel and all the other Black women who do not have the privilege of being heard.

Duchess Harris, J.D., Ph.D., is a professor of American Studies at Macalester College. Read a selection of her published works at works.bepress.com/duchess_harris/.

We’d like to hear it. Click here for writer’s guidelines Email your 450-word personal essay to editor@womenspress.com