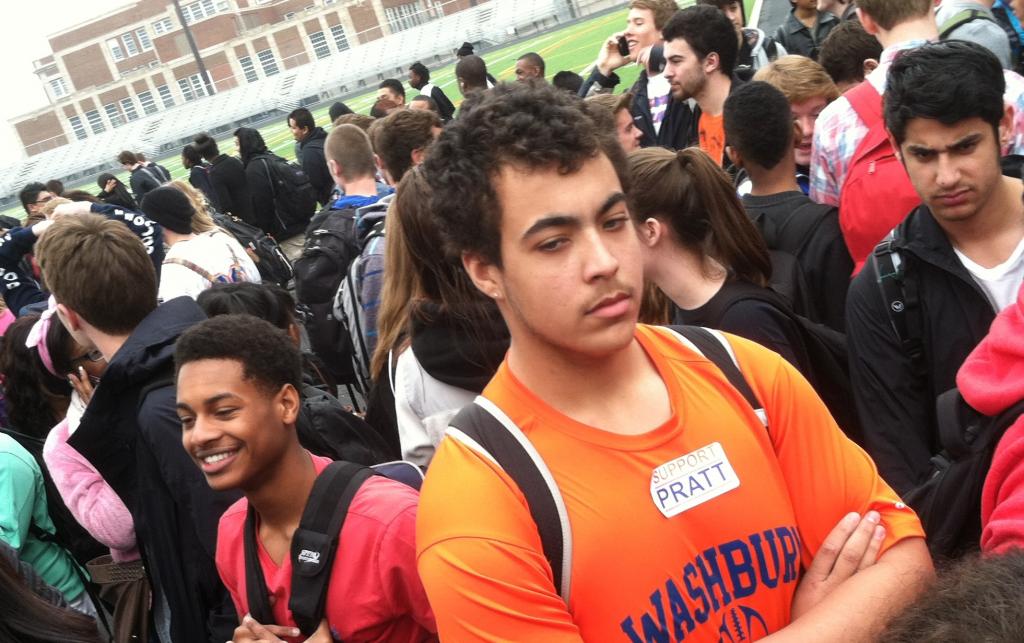 Coming home from spring break, I never thought that Washburn High School would make headlines in the StarTribune and be on the news. Or that I would participate in a sit-in at school and skip my 5th hour to see so many students sitting peacefully in front of our main office so that their voices could be heard.

I’m the sort of person who likes to stand up for what is right. I believe that others should always speak up and try to change a situation for the better.

Protesting two months before graduating from Washburn was something I never expected, though. Nor did I anticipate it would become such a controversy in our community and throughout social media.

It all happened quickly. During spring break in late March, news broke about Dan Pratt, the athletic director at Washburn, being investigated and possibly losing his job.

Why was this was happening to Mr. Pratt, an employee that the student body cared so much about? Why so suddenly?

Soon after, students began to organize and plan peaceful forms of protest for the first day back at school. The trigger for us was when Washburn senior Jamison Whiting formed a Facebook group called “Save Pratt” on March 28. Shortly after, word spread quickly on Twitter — not only to students, but alum and parents, who also became involved and wanted to know why this was happening.

Many outside Washburn questioned the “fuss” raised by the student body. I believe that this was largely due to a lack of understanding about what Mr. Pratt meant to each and every one of us who knew him. He is part of our Washburn Miller family, an employee who is loved and respected not only by the athletes at school, but by everyone, including the families of students.

Based on what we heard and details that news outlets later reported, Mr. Pratt was threatened with discipline because of a new scoreboard he attempted to secure for our football field. Also attached were “personal matters,” but that information was never disclosed.

The students only knew one thing: That Mr. Pratt’s job was in jeopardy. No one seemed to know the full story, and that frustrated a lot of us.

Just seeing the Facebook group amazed me, to see all the support, emotion and confusion simultaneously come together in that forum. Once plans for a walk out were posted on April 4, the news spread like wildfire as students became more focused on saving Mr. Pratt’s job. Many of us contacted local media outlets to let them know something big was happening at Washburn.

After the walk out on that following Monday, followed by a sit-in early Wednesday, media coverage had given the students a real sense of empowerment. We were being heard. The protests had been peaceful, and we were all practicing our First Amendment rights while still following rules to not disrupt classes or other school activities.

Though it may have been a surprise to outside observers, students weren’t completely shocked by what happened next. Following a school board meeting about the matter, the StarTribune published an article about Principal Carol Markham-Cousins’ job reassignment from Washburn.

This was never the goal of our peaceful protests. As students, we wanted to stay focused on Mr. Pratt keeping his job. We wanted him to know how much he had supported each and every one of us; how he made our high school experience better by giving students a second chance and pushing them in not only athletics, but academics.

In the end, Mr. Pratt did not keep his position as athletic director — though he does get to continue coaching. Principal Markham-Cousins was also ousted from Washburn. As far as losing our principal, the student body and staff has mixed views.

“In the long run, everybody lost,” Nancy Gustafson, a French teacher at Washburn, said to students at a meeting to discuss the matter.

As the results stand, I definitely feel like it was not a win-win situation. Mr. Pratt did not keep his position, which was the main point of everything we did. Our principal losing her job also felt like collateral damage.

However, I am very proud of my fellow students for working together on an issue as big as this. Before our protest, we felt helpless regarding school outcomes and decisions being made. But with a few clicks of social media, we were able to speak up and let everyone on the outside understand that students should stand up for what they believe in, as long as it’s done peacefully and intelligently.

The quickness of social media gave our mission purpose. Without it, the protests could not have taken place. That led to local media catching onto every detail and delivering the news from inside our school right away. It was our safety net. When we had to change plans a few times, that’s how we communicated with everyone. Now I fully see how social media can be used as a powerful tool to do pretty much anything — even a high school protest.

We never knew what the outcome would be, or what could have happened if we spoke up.

All we intended to do was show our community how important Mr. Pratt was to us, and how as Millers, we will keep speaking up for what we believe in.