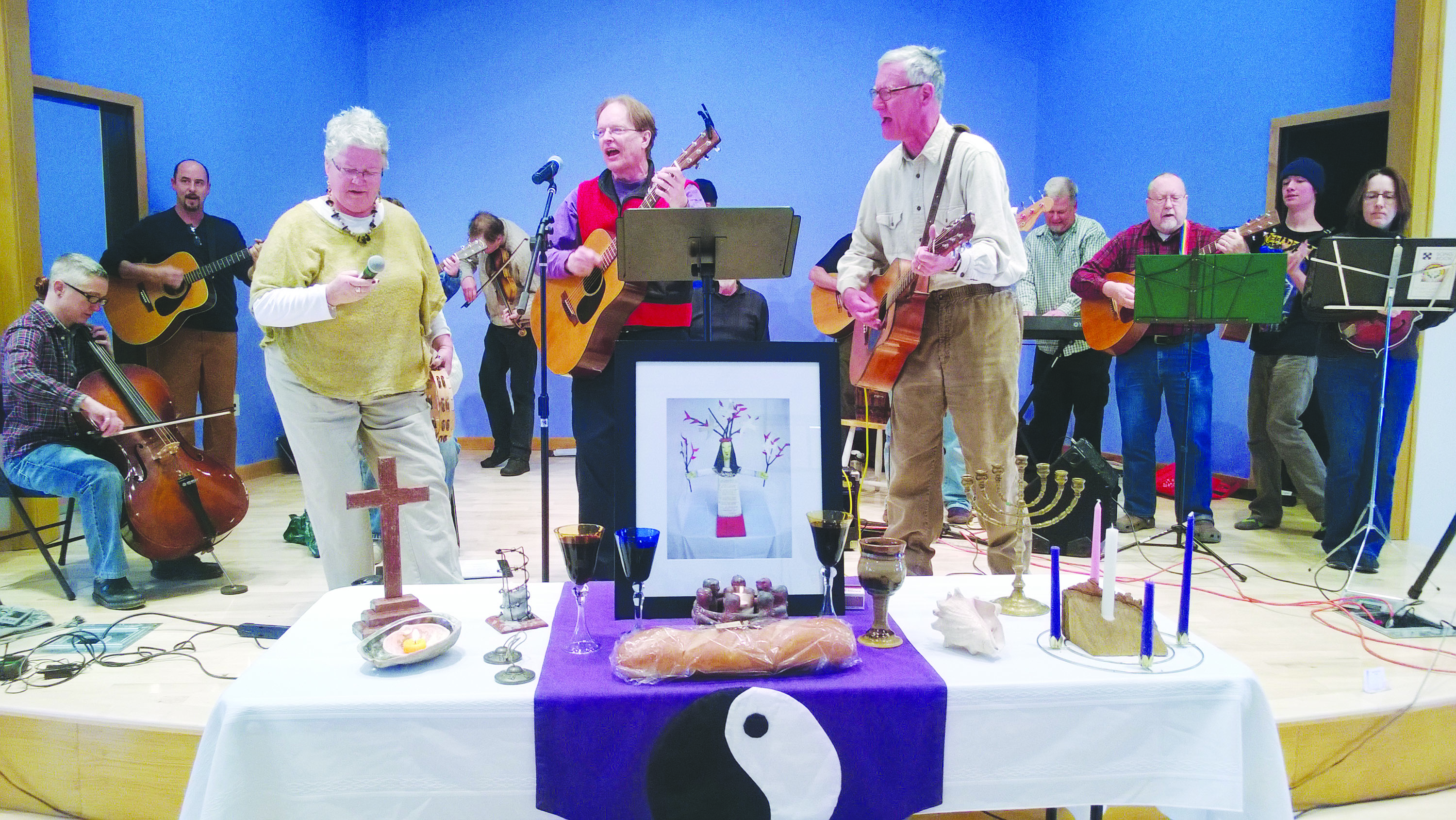 On Sunday, Dec. 15, 2013, neighbors of 3104 16th Ave. S. may have seen something that hadn’t occurred for 18 months—churchgoers, some toting musical instruments, trickling into the building. Just two days earlier, the trustees and Rev. Walter Lockhart had received the certificate of occupancy from the city and word spread through the networks—WE’RE BACK!

As the service began, the mood was giddy, nostalgic, jubilant, reflective, all at once. But the music was as unconsciously joyous as ever. By the time of the rousing finale, “When the Saints Go Marching In,” there were 20 pieces in the band including seven acoustic guitars, a clarinet and three brass instruments, drums and keyboard. Those who have ears, let them hear—are the acoustics good enough? This had been the reason for many hours of feverish planning. We could not recreate the old building, but one thing we couldn’t sacrifice was that magical Walker sound. The expert listeners cocked their ears, smiled with satisfaction. The acoustics were good.

Where has Walker been since the night of May 27, 2012, when the entire community gathered in horror and misery and drizzling rain to watch the 102-year-old red brick building burn to the ground? The first weeks were directionless, filled with speculation, paranoia, denial, mad grief. We counted the losses—all the art work, the Tree of Life, the late Rev. Bryan Peterson’s and the late Rev. Seth Garwood’s libraries, all the material in the rented offices of activist groups, the just-sprouted garden, and much more. We mourned the history, for that old church had housed draft counselors, Black Panthers, the beginnings of KFAI radio and In the Heart of the Beast Puppet Theatre. It had at one time been a theater and not a church at all, used by groups no longer around, such as At the Foot of the Mountain and theatrical stars who moved on to the Jungle, or the Guthrie. In the 1980s, it was a sanctuary to two Guatemalan refugees and was involved in the Latin America solidarity movement. In the 1990s, Native American groups once more used the church to organize, and Walker entered the Reconciling Congregation movement, calling on our denomination to fully welcome LGBTQ people. (Still working on that one.)

With all this radical history and current activism, it was normal for many in the community to initially suspect foul play. The fact that the building had to be bulldozed flat within 48 hours for safety reasons didn’t help allay suspicion. However, church leaders and members have been satisfied with the verdict of accidental, natural causes since June 2012 when the investigation concluded. Much of the factual testimony came from injured Fire Capt. Kathrynne Baumtrog, a first responder.

Those first few weeks were filled with a generous outpouring of love and support from the Powderhorn/Phillips/Central communities and other churches. Walker’s scheduled Memorial Day community meal was served by another congregation and took place in the middle of 16th Avenue, attended by over 200 people—the day after the fire! Over the past 18 months, Living Spirit Church, Faith Mennonite Church, In the Heart of the Beast’s Avalon Theatre—like the parents crashing on the adult child’s sofa in a time of crisis—and Patrick’s Cabaret have provided space for worship and other events.

Reverend Walter started calling us Walker 2.0. As Methodists go, Walker is a bit more Taoist than the normal Methodist church, so we could not help but notice that we were confronted with the eternal changing-ness of things. Of course there will be a new Walker, and it won’t be a pale imitation of the old Walker. It will be something new and, dare we say it? radical. Not that anyone will try to out-radical the old Walker, whose unique strength lies in its non-dogmatic nature. Walker’s membership includes atheists, witches and Jews, along with the expected political and social and gender outsiders. You don’t have to change your beliefs to be part of Walker, just believe in the Beloved Community itself. For this reason, there may be as many radically different versions of the “Walker Journey” (a prescient coinage of Bryan Peterson’s) as there are members. I will briefly tell you mine.

I moved from Atlanta to the Twin Cities in 1984, with my little multi-racial family: a son in kindergarten, a 9-year old daughter, and boyfriend/partner who made the move with me. We were looking for some activist community to get involved with and the Latin America solidarity movement was our main issue. We responded to a flyer asking for new volunteers to support Walker’s sanctuary project and went to a potluck at the parsonage. Then we tried out the Sunday celebration where the first hook was the five minute meditation on a reading from the Tao Te Ching.

You see, I was brought up Methodist, but the things I had flirted with in my seeking for a better spiritual home were Catholic folk mass, liberation theology, Quakerism and meditation practice. And here they all were, without the Catholic liturgy or hierarchy, without the stodgy Quaker processes, without a guru, a pope or a funny diet. In a Methodist church! I knew it had to be right, and within a couple of months I had signed on as a member. In the years from 1985 to 1998, I went through a lot of changes. I even got a little bit mad at one thing or another at Walker Church, and I had semi-dormant periods, alternating with periods where I was so involved it was almost too much.

In 1998, I left the Twin Cities to move to England. I had a bon voyage “giveaway” party in the Walker Church basement. There were nearly 100 people there and they were all really close friends, people I truly cared about. I never had 10 people I was that close to in Atlanta or in England. It was Walker Church, the Beloved Community, that was the basis for my own sustaining community of friends. Comrades in the struggle, help along the Journey. I came back from England in December 2011 and this community, quite literally, kept me alive that first year, in deep depression, with no job and no belongings after two moves across the ocean.

And then came the fire, and then came the Journey to what Walker Church will be now. The new Walker will be an even more intentional part of the Southside community. We have big plans, especially for our kitchen, which was perhaps the next thing after the acoustics that took major planning. Free community meals are in the works. We want to share our conference room, dining hall, fireplace and meditation spaces. All in the community are invited to drop by and see what we have made to share with you: Walker 2.0.