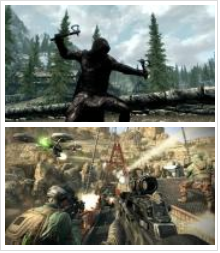 Graphic imagery in popular games like “Assassin’s Creed III” and “Black Ops 2” have led to a spirited debate about what’s contributing to a more violent culture.

A rabid gamer contemplates the effects of virtual violence after the Newtown school massacre.

As I aim my semi-automatic sniper’s holographic sight at an enemy far away, my teammate takes his rocket launcher and blows four people up with one shot.

I get the headshot.

This is not just an ordinary kill. Instead, my enemy’s head blows completely off, gallons of blood spattering the truck he was using as cover.

I focus my sights on another sniper. He likely has his sights on me, too.

I decide to go for a below-the-belt shot, which will earn me extra XP. These allow you to unlock, buy and upgrade weapons or abilities as the game goes on.

I miss him, and instead hit a teammate, causing us to lose a point.

Everyone on the chat starts screaming at me and my anger takes complete control. I switch to a long-range assault rifle, jump down from the hill I’m on, and charge forward, killing everyone in my way. It might seem like an act of suicide, but I snag a decent kill streak of 15, which earns a 500 XP bonus. I respawn behind the enemy line, and go for the silent kill, butchering eight more enemies before I bring on an artillery strike, a reward after seven kills.

As I slit the throats of more opponents, my stomach starts to churn, my gut starts to tighten and my head starts to ache.

I have just ended the lives of 36 people. I have seen their faces up close, whether in my sniper scope or right before I slice their necks and stain my hands with their blood. I decide to leave the match, discarding all the XP, kills and deaths I just racked up.

I close the game, my mind going back to the Sandy Hook Elementary School shooting in Newtown, Conn. a few weeks prior. I think deeply about the reason I play violent games.

If it’s for fun, then am I killing people for fun?

It’s hardly coincidence that last year saw the release of some of the most advanced and popular violent video games on the market. Teens want them and video game developers are happy to oblige.

“Assassin’s Creed III,” “Black Ops 2,” “Need for Speed: Most Wanted” and “Halo 4” are best selling titles because of their high caliber of quality. All of them fall under the classification of “hyper-realistic,” which means that the violent graphics are, at the very least, equal to what you’d see in real life.

Gamers want more realistic environments, guns, people and animations because it’s simply more “authentic’ and “immersive.” The more we’re placed on the edges of our seats, the “better” the game is.

Realism means two things in the gaming world: How close to real life the game feels, and how graphically advanced the display is. Preference for these two ideals varies greatly from gamer to gamer, but all hardcore enthusiasts crave some of both.

And yes, in a video game, I can kill as many people as I want, in any way I want, without being penalized.

But this isn’t just about escaping to a world where killing is the golden rule. It’s more about enjoying great gameplay, graphics, narration and sound effects.

That’s what can be difficult to assess from the outside looking in. As these games become more realistic, teenagers — the largest consumers of violent video games — are exposed to more violence, blood, killing, dead bodies, profane and vulgar language and sexual imagery. But video games are also massive works of art. Designers, programmers and narrators all use incredible creativity and imagination to craft gaming worlds that are truly beautiful.

Yes, beautiful. The blood, gore, flesh and screams might not fit that description, but the game as a whole does, much like a graphic mystery, thriller novel or epic movie.

That level of appreciation is likely lost on non-gamers. At least when it comes to attention from the mainstream media following a national tragedy, any discussion about violent video games comes back to — naturally — violence.

I get that. The amount of gore in “Creed,” “Halo” and “Black Ops” is astounding. For instance, in “Black Ops 2,” you can see the eye color, hair color and detailed facial features of the person you just killed. So yes, in a lot of ways, you get to “feel” what it’s like to kill someone. Then again, these games feature advanced, non-existent weapons, bonuses and powers that you’d never have in real life. While playing, it’s easy to separate virtual life from the real world.

However, it does require a real emotional investment. The better I am at a game, the better I will feel, which leads to more exponential satisfaction. Because so many gamers love to play, leaderboards spring up and we all try to beat each other’s scores. That’s a major driving force when deciding whether to turn on the Xbox or not. Even if, in the end, it only means that I’m skilled at manipulating a controller, it’s good to know that I’m better than my friends at something. That has personal value to me.

Now, some researchers say that playing these games directly correlates to mass killings, as almost every mass shooter “enjoyed” some degree of virtual violence before carrying out a real life act. As a teenager who plays everything from “Black Ops 2” and “Halo 4” to “FIFA Soccer 13” and “Angry Birds,” I strongly feel that the chances of me becoming a mass shooter are slim. My friends, who also play these realistic games, feel the same way about their habits.

So what other factors should be discussed? To me, you can’t ignore the environment that a person is living in. If the atmosphere inside a house is always negatively charged, or the person is being abused, yes, playing these games could astronomically increase their chances of carrying out a mass shooting. The person could also be socially awkward – the teen who never goes to anything, hangs out with friends, or always maintains dark, even suicidal thoughts.

Also, violence existed long before video games and other countries have access to the same titles. Is playing violent video games a red flag? Maybe. But isolating everyone from these games won’t solve the problem.

I look back at my TV. I keep my eye on the leaderboard.

Jake has just achieved a kill streak of 31, topping my high of 28.

I have to go back and beat him. I cannot accept being second place. I have enough XP to buy a new weapon, but if I kill 76 more people, I can level up and unlock the massive Rampage rocket launcher.

But it’s also 11 p.m. and I’m tired. I turn off the Xbox and think about how I’ve spent the last few hours. What if someone actually killed 76 people and it was all over the news the next morning? I find myself contemplating this more and more often.

But I am not a killer. Nor will I ever become one. I play games for entertainment, but not for the thrill of seeing people killed. I enjoy the challenge of any game, violent or not.

An Xbox controller will be in my hands tomorrow night. This time, Jake’s name will not be atop the leaderboard.