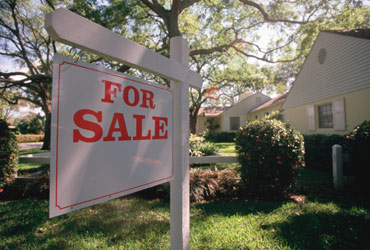 The housing crisis that sent the economy into the 2008-2009 Great Recession is still such a heavy drag on the economy that it’s threatening to push us back into a double-dip recession.

The danger is real. While economic news shifts constantly with each monthly or quarterly statement, the sum of these economic reports shows job growth is too slow to pull us up from the brink of recession and that homeowner finance struggles are pulling us back down.

What’s more, we have policymakers in Washington and St. Paul ready to pile on more problems for the housing and mortgage markets by putting more people out of work and, by extension, putting more housing property on depressed markets.

“Our economic troubles started with the housing collapse. We can’t recover without the housing industry coming back,” said Larry Buegler, former president of Norwest Bank and the predecessor bank of AgriBank.

Minnesotans’ finances and the economy “can’t improve unless the housing market does,” adds Peg Crumpton, a real estate broker with Luke Team Real Estate in Rogers,

Here’s a recap of economic news laid right on your doorstep:

On Monday, the Zillow.com online real estate database reported that 46.2 percent of Twin Cities metro area single-family homeowners now owe more on their mortgages than their properties are worth. This means nearly half of the home mortgages are considered “underwater,” and that more property will be placed on depressed real estate markets by nervous homeowners and their lenders in future months.

But as is typical of such economic news that “can make your head spin,” as banker Buegler describes it, Zillow.com data are different from what local realtor groups are finding. Zillow.com found a metro-wide median home price of $159,000 in March. The Minneapolis Area Association of Realtors earlier reported a $140,000 median price in March and a slightly improved median price of $146,000 in April.

Whatever number you use, we still have a problem. But just how big of a problem is tough to tell. Back in June 2006 (the housing “bubble’s” peak), the median home price reached $246,800. Many mortgages written within the past decade, up until a few months ago, have a strong probability of being underwater.

To keep your head spinning, the negative data on underwater mortgages contrast with findings from another real estate industry data service, LendingTree, which recently listed North Dakota, Minnesota, New Hampshire, Maine and Iowa as the nation’s top five healthiest housing markets that are ready for a bounce back.

Realtor Tom Scott recently wrote in a Shakopee real estate blog that LendingTree used debt-to-income ratios, unemployment rates, homeownership (72.6 percent in Minnesota), loan-to-value ratios, and negative equity as measures for the ranking. But during the time these measurements were taken, LendingTree was using a median home value of $224,000 – or well above what other real estate groups report.

Along this same line, Star Tribune writer Jim Buchta reported on May 7 that while first quarter foreclosures in Minnesota were down 21 percent from the same period a year ago, based on HousingLink data, a “shadow inventory” of foreclosures was being held by lenders that will reach the market in the future. 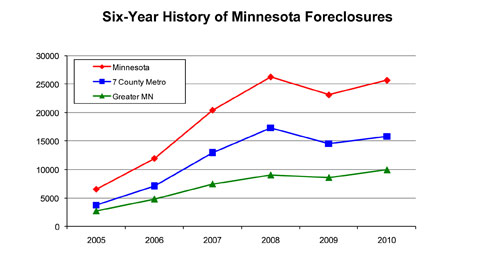 In its year-end report on helping Minnesotans with mortgage and debt counseling, released in February, the nonprofit Minnesota Home Ownership Center noted that the majority of homeowners who sought help in 2010 are balancing mortgages on less income. What’s more, a quarter of these homeowners are now paying more than 50 percent of their incomes to mortgage payments, and almost two-thirds are paying more than 30 percent – the generally recognized maximum for an affordable mortgage.

It’s difficult to predict where this is going. A first quarter report on Household Debt and Credit, released Monday by the Federal Reserve Bank of New York, shows a slight nationwide improvement in consumer debt. Total consumer indebtedness was $11.5 trillion, a reduction of $1.03 trillion from the peak at the close of 2008.

Whether this is a leveling off of debt problems or a springboard for better times will need to be proven. It perhaps does explain while realty groups are finding increased interest among buyers and sellers for creative transactions such as rent-to-buy contracts, rent-to-buy options and contract for deed transactions.

Depending on how these contracts are structured, they can move property or keep property from being abandoned for months or years on end, said broker Crumpton. But they are fraught with danger as well, she added, noting that few of the contracts have protections from mortgage companies that might buy the “paper” from turning around and calling in the loan.

June Larsen, a St. Paul CPA, said none of these creative devices should be considered without consulting both lawyers and accountants. Without both buyers and sellers properly protected, she said, the new contracts can be as dangerous as the mortgage derivatives that contributed to the housing bubble’s burst.

So what can Minnesota do? Not much, as it turns out. But the state can make matters far worse for households and the housing market, and such actions should be avoided.

Here at home, state budget bills before the Minnesota Legislature would greatly reduce state and local employment. Budget analysis of these proposals suggest as many as 30,000 Minnesotans may lose their jobs either from direct layoffs or indirectly from negative multiplier effects. The number of homes that might enter the market from either inability to pay mortgages or from families having to move to new jobs is impossible to predict.

But even more of a threat may be coming from Washington, warns Buegler. Some members of Congress are proposing an end to mortgage interest and real estate tax benefits, and other proposals are afoot that would end the federally-chartered Fannie Mae and Freddie Mac mortgage insurance programs.

Such talk is enough to dampen consumer confidence in the housing market, he said. At the same time, said CPA Larsen, “Congress has been talking about mortgage interest deductions and credits for 30 years and it hasn’t happened.”

The danger involving Fannie and Freddie is that they insure approximately half of all U.S. mortgages. What would fill the void for bringing confidence to a weak housing market?

While past history indicates all need to sacrifice in times of crisis, asking the middle-class, who shoulder much of the housing market, to carry nearly all of the burden isn’t a healthy way forward. In Minnesota and across the nation, we need balanced budget approaches that don’t weaken the heart of our economy: the middle-class and housing market.