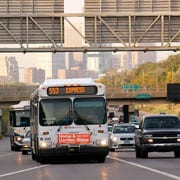 “We can feel pretty good about the level funding and support for transit in Minnesota,” Tony Kellen, president of the Minnesota Public Transit Association, wrote in the group’s latest newsletter.

As a result, the Minnesota Department of Transportation says the state remains on track toward its statutory goals of meeting at least 80 percent of greater Minnesota transit demand by 2015 and 90 percent by 2025.

“Thanks to advocates speaking up for transit all across the country, the final federal transportation reauthorization bill does not remove federal gas tax dollars from the Mass Transit Account and it maintains funding for important transit programs we rely on,” Kellen added. “The ability of Congress to pass a new transportation bill despite the rhetoric we hear in an election year is really a tribute to the importance of basic transportation services and systems that people need every day of their lives.”

In lightly populated greater Minnesota, that’s more than 11 million riders in 2010, just a tick below the record recession year of 2008. This is the payoff from doubling the number of countywide bus and van services to 70 over the past 20 years. The future looks bright, too, with more than $100 million of increased federal transit appropriations for Rural Area Grants. Both state and federal funding have been vital to rural transit’s growth, so important to people who can’t drive but still need to get around.

Those folks particularly will welcome the federal transportation bill’s inclusion of an American Public Transit Association proposal to combine several programs that boost their mobility. “The consolidated program will increase the level of resources available for elderly and disabled transportation programs,” said Margaret Donahoe, head of the Minnesota Transportation Alliance.

Transit in the Twin Cities area has benefitted similarly, with adequate operating funds and legislative support for the Minneapolis Interchange multimodal transit station slated to open in 2014 near Target Field. Meanwhile, two light-rail projects that will use the Interchange—the Central and the Southwest, along with 1,900 buses daily—got important federal go-aheads last year. The Central is guaranteed funding of half its $957 million cost, and the Southwest got permission to begin preliminary engineering.

The Star Tribune noted the presence of state Senate Majority Leader David Senjem, R-Rochester, at this month’s groundbreaking for the Interchange. “His participation underscores the essential truth about strategically investing in transportation infrastructure,” the newspaper editorialized. “It need not be perceived as yet another metro-vs.-outstate divide, or one that falls strictly along partisan lines.”

Meanwhile in Washington, Minnesota’s Amy Klobuchar got a study of rural freight and transportation networks into a five-year farm bill passed by the U.S. Senate in June. And the conservative-led U.S. House defeated a Tea Party proposal to slash Essential Air Service subsidies for 120 airports in remote areas, including several in northern Minnesota.

Right-wing anti-transit rhetoric won’t go away anytime soon, but it’s good to know that some conservatives recognize the need to compromise for the sake of their mobility-challenged constituents.