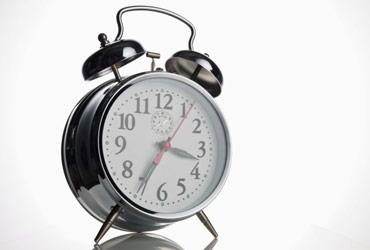 We sometimes lose track of it in today’s United States, but it used to be common knowledge among employers that 40 hours a week was the maximum that should be expected of employees if productivity was to be maintained. The more hours a week people are made to work, the less productive they become. This raises some important questions about how we manage our teachers and students.

Over a century ago, factory managers began to realize that daily productivity increased when workers’ hours were cut from nine a day to eight a day. That is, by working one hour less a day, workers produced more over the course of that day. Henry Ford made waves in 1926 when he cut worktime from ten hours a day to eight, and from six days a week to five, without reducing pay. The result? Increased output and lower production costs. Subsequent research in more modern fields like software development have confirmed that similar results hold for contemporary creative work.

It turns out, that human beings are not automatons whose work output stays steady during every hour we work. Instead, when worked too long we start making mistakes, and the time it takes to correct those mistakes quickly removes any benefit from the increased work time. Work a little longer and we reach negative productivity, requiring more time to fix mistakes than the extra time scheduled to work.

What does this mean for teaching? Isn’t it, like, a part-time job? And what about all those summers off?

Well, not so much.

To offer one example, I submit my own, final year in the classroom. During that year, I taught three sections of twelfth grade English, one section of advanced ninth grade English, and one section of “reading lab,” a course aimed at helping students pass the state reading test required for graduation. My summer was mostly spent building the curriculum for the twelfth grade course. (I wasn’t told about the advanced ninth grade class until a couple weeks before school started and the reading lab was supposed to be supported with a new online reading program that didn’t quite pan out as expected).

In the case of the twelfth grade class and the reading lab, I basically had a course title to work off of. For advanced ninth grade, I had a list of books that had been taught before and access to some of the materials tied to those books (though I didn’t end up using any of those). The bottom line was that I was basically building three courses from scratch.

I had about 60 twelfth grade students, 30 advanced ninth graders, and 10 reading lab students over the course of the year (with some fluctuation as students came and went). That’s makes for a 100 students even, an atypically low student load for the school.

Our contract time allowed for 7.75 hours a day, or 38.75 hours a week. Hey, there’s that easy teacher schedule, right? Wrong. The total amount of prep time scheduled during the week worked out to about 5.5 hours. How much time did I actually need for prep work? Well, let’s go to a table. 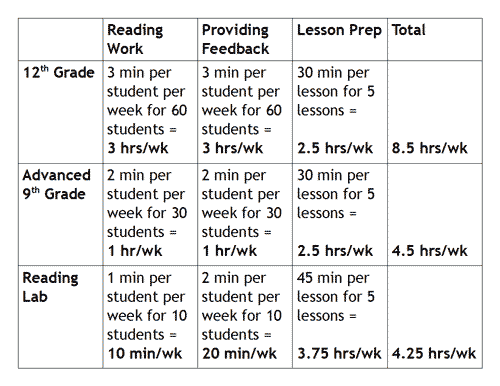 “Reading Work” refers to the amount of time spent reading and marking up a student’s work for the week. My seniors turned in one written piece every week, usually between one and three pages. Reading work also meant marking errors or places of awkward phrasing.

“Providing Feedback” is what it sounds like. My ninth and twelfth graders would get a paragraph of specific feedback in response to everything they wrote (this all looked a little bit different in reading lab, but the time estimates should be about right), though things usually went a bit faster with the ninth graders since their pieces were generally shorter and average writing ability generally higher.

“Lesson Prep” includes finding or creating examples and non-examples, designing exercises, building digital presentations, etc. Again, most of these courses were built from scratch, and the reading lab in particular required a significant amount of prep time if it was to be done right—pieces needed to be pre-read, with specific questions tied to specific passages.

The grand total works out to 17.25 hours a week of prep time. Throw in another hour of “administrivia,” or the random paperwork needs that come from being part of a complex organization, and we’re looking at 18.25 hours of “prep” work a week. Individual teacher loads will vary, of course, but I would say that this was largely typical for my school, if not on the low side (as I’ve been leaning low in my time estimates here).

This is not sustainable. The life of a teacher during a school year is not a recipe for maximum productivity; it’s a recipe for burnout. We need something different.