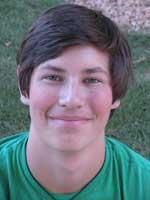 I am half Mexican, though I may not look the part: Blue eyes, dark brown hair, tan skin, but not quite dark enough to be recognized as Latino.

Just because my maternal grandparents came from Mexico doesn’t mean that I speak Spanish (because I don’t), or that I love spicy food (I can’t stand it), or that I have a job no one else wanted to take (okay, I am a teenager so cut me some slack).

In the middle of the salsa-dancing unit in gym last fall, the teacher said, “You’re a natural. You pick it up so fast.” I thought: What am I doing? I know almost nothing about being Latino, despite being half Mexican.

Coming from people I know little about weighs heavy at times. I sometimes feel lost, not knowing exactly where I came from or if I have family members I don’t even know exist. I live with my mother and sister and don’t know much about either side of my family beyond my parents.

When faced with forms that ask for my ethnicity, I always check Latino because it’s half of who I am. Yet some of the people I’ve met argue with me about my ethnicity. I think: How can you argue with someone about who they are? Their decision to embrace or push away their culture is their decision. I happen not to know very much about my culture, but that doesn’t mean I’m not Latino.

Recently I asked my mom to tell me more about her parents. She explained that my grandfather came to Chicago from Mexico and spent his whole life working in a factory until he had a heart attack at age 51, long before I was born.

Her family raised her to be American, not Mexican, in hopes that she could get a good education and job without being profiled or stereotyped. She doesn’t speak Spanish, for example. My mom was raised to be American and in turn raised me that way.

Times were so different when my mom was growing up. People tried to fit in and even pushed away their heritage to try to not be discriminated against. Now people start heritage and ethnic clubs to help embrace their culture.

My mom explained that her father – my Grandpa Lopez — came from a quaint town called Parras de la Fuente, in Coahuila, Mexico. This is where my family is from, the Grapevine of the Mountain.

If I could, I would be on a plane flight to Mexico next week. Even knowing a little more about my heritage I feel closer to my roots. I plan on making the trip to Parras one day. In the meantime I’m going to find out as much as I can.