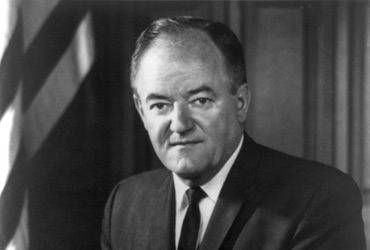 It should become obvious this week, as we pause to remember what would have been Hubert Humphrey’s 100th birthday (May 27), that any Minnesotan old enough to have known him has a story to tell. For me, the Humphrey lesson is about hunger, the never-ending need for public response to hunger and poverty, and how we all fall down on the job from what he called “compassion fatigue.”

The Minnesota Legislature is supposed to finish its work by midnight tonight, with results that neither look promising nor compassionate. The nation is slowly recovering from recession, and the will is weakening in Congress and at state capitals to keep the recovery on track.

Hunger in America and around the world has spread. Calls for greater commitments by developed countries to respond to human needs are not being met with great success.

Compassion is frail; compassion fatigue is still with us.

Nearly 40 years ago, network television brought the agony of famine from a region in northeast Africa into most Americans’ living rooms. Senator Humphrey seized the opportunity and got Congress to quickly pass a special famine relief bill authorizing the U.S. government to buy huge amounts of surplus commodities to serve as emergency food aid.

I was a young reporter in Washington at the time for St. Paul, Duluth and Grand Forks newspapers that would later be part of Knight Ridder Newspapers. An economist at the U.S. Department of Agriculture sought me out and asked what Humphrey “was up to.” Such quantities of food aid would flood local markets and destroy local economies, the economist said.

A day or two later, I mentioned the economist’s concern in an interview with the Minnesota senator. Humphrey agreed, and then noted his bill didn’t mandate that all the purchased food be used in that one relief effort.

“We are a charitable people. But we suffer from compassion fatigue,” he told me. “There’s always another Super Bowl, another World Series, an Olympics … always something to distract us.”

The famine spread geographically in the next year and a half. United Nations agencies had great needs to feed people in war zones. All of the food Humphrey sought got used at various places around the globe.

Compassion fatigue sounded like another Humphrey turn of phrase, for which he was noted. Years later I learned health professionals going back to the 1950s used the phrase, and Humphrey adapted it to political science. It is often shortened to “burn out,” but was formally studied among nurses as “secondary traumatic stress disorder.”

Humphrey used a moment when Americans were supportive of food aid to stockpile supplies, and then had the Nixon administration prepared to respond when the almost-inevitable emergencies occurred in various parts of the world.

In the division of labor in our Washington bureau at that time, colleague Al Eisele covered Humphrey and other people of interest to our readers in the political realm. My duties were to cover Humphrey, Sen. Bob Dole, R-Kan.; Sen. George McGovern, D-S.D.; Rep. Bob Bergland, D-Minn., and others who worked on farm, food, nutrition, foreign aid, economic development and agricultural trade issues within the political economy. All issues are intertwined, as were the careers of these public servants.

Food, hunger, nutrition and their ties to foreign policy and economic development bonded may of the post-World War II political leaders from the Midwestern farm states, and all played giant roles in humanitarian assistance during that era. But in his classic 1972 dual biography of Humphrey and Sen. Eugene McCarthy (Almost to the Presidency), Eisele portrayed how Humphrey’s ideas were turned into laws and public policy.

While Humphrey was working on programs addressing hunger and poverty in Washington, he also worked to convince farmers and people of faith they must band together to combat the same societal problems. Stressing enlightened self-interest arguments, Humphrey told a Grain Terminal Association (GTA) annual meeting of farmers that the impoverished “are not consumers. They are window shoppers.”

That was an economics lesson this farm kid, attending the meeting with his father and a neighbor, could grasp at nine years of age.

Later, returning to Minnesota in the 1980s, I was struck by how what is now the Department of Applied Economics at the University of Minnesota had become an international center for studying the ties of economic development, hunger, poverty, and related public policies.

It was as if this one academic department had taken on the task of analyzing, amending, improving upon and expanding the life work of Hubert Humphrey. As one example, a 1987 research paper collecting dust in my basement has the late Willis Peterson proposing a system of international food stamps.

It is still valuable; it acknowledges that providing purchasing power to people in need supports the entire food chain, and thus economic development, while also meeting human needs. And it breaks the tendency of using food aid as a surplus disposal mechanism, a criticism of aid going back as far as World War I.

An expert on shortcomings as well as benefits of these programs was the late Vernon Ruttan. While editing a 1993 book, Why Food Aid?, Ruttan spent some time exploring Humphrey’s role in food programs from both his work on the Senate Foreign Relations and Senate Agriculture committees.

That part of his research didn’t find a place in his book. Over a couple of lunches, several telephone conversations and a lot of laughter, Ruttan and I concluded it wouldn’t have mattered what committee assignments Humphrey had. He would have found ways to stake claim to these policy issues.

The task of humanity meeting human needs—so central to Humphrey’s career—has not gone away. The United Nations Food and Agriculture Organization (FAO) notes in its annual hunger report that the world had 878 million undernourished people in 1969-1971, or 26 percent of global population; and it had 848 million people classified as undernourished in 2005-2007, or 13 percent of global population.

The percentages have gone down, but people in jeopardy remained above 800 million for the past 40 years. And now, after the global recession of 2008-2009, the number of people considered undernourished has actually increased to an estimated 925 million in 2010.

This is a problem at home as well. The beating down of the middle class and the out-of-work poor people in America now has one in seven, or 44 million people, needing SNAP food assistance, according to USDA studies. What’s more, 37 million Americans need help from government-affiliated food banks and community and faith-based food programs to keep food on their tables.

Food security is still a real danger for our neighbors and friends. And, as public policy debates and actions suggest from this past year, we are all at danger of succumbing to what Humphrey so eloquently described as compassion fatigue.