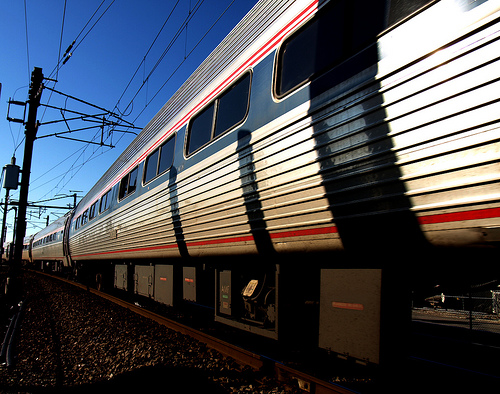 When I visited my native USA this summer, I needed to take my daughter from Minnesota to Missouri, a thousand-mile trek across the Heartland. I decided to use Amtrak, and wanted to share with you my perceptions of the journey.

I wanted to avoid driving for several reasons. I didn’t want to strap a five-year-old into a car seat for 12 hours, or be forced to stop at numerous roadside franchises designed to sell movie promotional toys and congealed pseudo-food. I remembered the last time we made the journey, when a kamikaze deer smashed our rental car and left us stranded on the Iowa highway. Most of all, though, I wanted to see how easily one could journey halfway down the length of America without a car.

Let me start by noting that everyone I dealt with at Amtrak was courteous and helpful, even funny. As superior as the European trains are, their staff would be less likely to make friendly conversation as they processed our ticket, or smile as they gave us directions. A European conductor might be less likely to stop by especially to check on my daughter, or to announce after an empty small-town night stop, “Folks, that was Dwight, Illinois, and we hope that was as exciting for you as it was for us.”

The staff’s best efforts could not make the train ride a pleasant experience, though. We showed up at 7 am for our 7:45 train – the only train going to our destination that day — which showed up at 8:30. The delays only increased as the day progressed, and we finally arrived in Chicago two hours late, missing our connecting train. We finally reached Alton, Illinois in the small hours of the morning, long after we were supposed to arrive.

As my daughter played in the seats, she poked her leg on a metal corner, and I considered whether I needed to bring her to the emergency room for a tetanus shot. The toilets were miniscule and poorly ventilated. The only food available on the first, nine-hour leg was six cars up, I was not inclined to leave either a sleeping child or my belongings. The dining car on the second leg opened two hours late. The food that I could find was of vending-machine quality but three times as expensive.

It was a pleasant summer evening travelling from Chicago to St. Louis, but the cars were kept sufficiently frigid that the Russian immigrants in front of us complained loudly. Whether because of the food, the temperature or the stress, my daughter spent most of the next day vomiting.

A sixteen-hour plane trip, by contrast, would probably involve a few full meals, many snacks and a selection of movies. I don’t require an on-board masseuse or French waiters, but some accessible juice or pretzels would go a long way.

A more fundamental problem, which I know is out of your control, can be shown by a brief glance at the map on your web site: Amtrak has only a small number of lines that must stretch between two oceans and serve 300 million people.

Nearby towns that do have Amtrak lines are often inaccessible to each other, as the lines run parallel for hundreds of miles without meeting. For example, Denver, CO and La Junta, CO both have Amtrak lines and are 176 miles apart. But to get from one to the other by train, one must travel from Denver, Colorado to Galesburg, Illinois (!), 889 miles away, and then travel another 896 miles back to La Junta – a 1,785-mile trip in all.

To use an example closer to my birthplace, Poplar Bluff, MO and Fulton, Kentucky are 117 miles apart, but to travel from one to the other would require an 858-mile trip to Chicago and back. Oklahoma City and Dodge City are 263 miles apart, but a train would have to take a 1,548-mile journey through Fort Worth and St. Louis to get from one to the other.

I estimated these figures by looking at the stops on your web site and Google-mapping the distances between cities, so the mileage may not be exact — for Google’s directions, like everything else in America, assumes that you will drive. But you get the idea.

To understand how strange this is, consider my own home of Ireland. The Irish are not the most crisply efficient people on Earth, but their trains usually arrive once every half hour, and if they are five minutes late an outraged grumble ripples through the assembled commuters.

Cross-country trips – only the distance of a cross-state trip for us, of course – have fairly good food served in your car, comfortable seats, wireless service for laptops, and so on – and it is no more expensive than Amtrak per unit of distance, even though everything else in the country is two or three times more expensive.

Other European countries have even better service. When visiting Germany, I could tour major cities with a toddler, limited German and no car, through a series of national rail lines, urban trams, buses, subways, and sub-subways under the first set of subways.

A common response is that America is a much vaster country, so compare Ireland’s dozens of lines and stations with a US state about twice the size – say, Wisconsin, with one Amtrak line and two stops. Or compare vast to vast: Russia is larger than the United States, yet Russians travel 1,220 kilometres per person per year by train, while Americans have only 80 kilometres – behind Pakistan, Kazakhstan and Egypt.

You could argue that this indicates our prosperity, as more people can afford their own cars. But far fewer Americans had their own cars when there were more trains, indicating the opposite: that more people need to pay for cars because they have no rail service. Europeans often travel 10,000 percent more by trains than Americans do, and they are not necessarily less prosperous nations.

We used to be better. The golden spike in the transcontinental railroad looms large in our history books, and my country was once covered by a capillary network of lines that reached hundreds, if not thousands, of small towns. Visit or live in Missouri or Kansas towns, as I have, and you will often see a long-abandoned train station in the old town centre, tracks still visible under the grass. We deserve better, as a civilised nation and alleged superpower, than to live with so many new ruins.

Trains or streetcar networks once branched out inside cities as well – my grandparents met and fell in love on the St. Louis trolleys, around the time Judy Garland was singing an ode to them in the film Meet Me in St. Louis. The film was set in 1904 and made in 1944, so the trolleys had been around for decades at that point – but tragically, not for much longer. They and other streetcar lines were bought and destroyed by a coalition of oil, car and tire companies long ago – the companies were later found guilty of criminal conspiracy in federal court, and fined $5,000 each.

Recent rail lines in St. Louis and Minneapolis were built only after decades of fierce opposition, and critics unfavourably compared existing light rail lines to road use – without comparing it to a road that goes from point A to point B without meeting any other roads. I will also hear people claim that the trains are largely empty, without noting that the cars on the road are also largely empty. And if the stations in Minneapolis and Chicago were any indication, there are far more people clamouring to use even Amtrak than the stations can handle.

I realize I’m conflating the apples and oranges of heavy and light rail, Amtrak and streetcars. I realize I’m ranting about decisions that were made far above you or long ago. But I bring it up to show that I am sympathetic to your situation. I suspect your likeable and highly professional staff works very hard under difficult conditions and an insufficient budget – paid, I understand, not by taxes as roads and electric lines are, but on fares alone. I suspect you are considered, like the Postal Service, a vestigial bit of infrastructure in this era of frequent flyers and broadband, relegated to the poor, the elderly, nuns and the Amish, left to die of natural causes.

I think this is seriously misguided. Rail worked for us for decades, and today Third-World peasants can count on transportation freedoms that most Americans cannot. Every surge in the price of fuel, every dire warning about the climate’s transformation, every new plunge in the economy makes Americans’ constant driving more difficult and rails more viable.

But if more of us are to travel by rail, we should be able to widely, with trains running many times a day to many destinations. Riding the train should be an experience people will seek out, and to which we will return.

I have used Amtrak before, and I expect I will again, so let me know who I can write to help change this. Feel free to pass it on to your head of projects, your CEO, the Secretary of Transportation, whoever you think appropriate.

And get that metal corner sanded off.

Brian Kaller is a former Minnesota journalist now living in rural Ireland. He is vice-chair of FADA, a group that is working to prepare Irish towns for peak oil and climate change.