For nearly a decade, education policy in the United States has been dominated by four words: “No Child Left Behind.”

This is the first in a two-part series. Tune in tomorrow for our analysis of the conservative counter-proposal and some closing thoughts.

The aspirational title of the law belied the major problems it would cause students and schools across the country. While the Obama administration’s Race to the Top grants have captured more headlines recently, NCLB remains the educational law of the land.

It represented an unprecedented expansion of the federal government’s role in education, one many would argue is disproportionate to the actual federal share of education funding.

The good news is that NCLB will be going away soon. The bad news is that we don’t know what’s going to replace it. Both President Obama and a group of leading congressional conservatives have put forth alternatives to NCLB, and some policy between the two will likely be the final replacement. 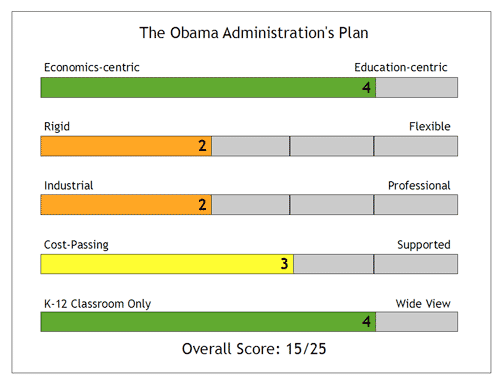 Now, let’s get to the detail.

Does the proposal seek to create an education market (economics-centric), or does it focus on driving innovation and change through our traditional public schools (education-centric)? Counter to conservative propaganda, our public school system has a record of innovation and development; focusing on inter-school competition undermines actual school improvement.

The administration’s plan does not indulge the same competitive choice fetish that many conservatives do, and its proposals around school choice are a small part of the plan. While it does have a knee-jerk expansion of high quality alternative school options, it contains many more measures aimed at diversifying the educational offerings of the traditional public school system, and for this it should be commended.

How much freedom does the proposal give states and local districts in addressing the educational needs of their communities? NCLB is infamous for its one-size-fits-all assumptions about education reform.

The administration’s proposal, while nominally giving states and districts more flexibility, still lays down many, many conditions for states and districts to meet before it will consider supporting their efforts. In particular, it relies heavily on competitive grants. These are great if your goal is to get many states to spend their own time, money, and energy on meeting your expectations while only having to pay the few that best meet your guidelines. If your goal is customization of policy to local needs, not so much.

How professionally does the proposal treat the educators who will need to carry it out? The disregard of teaching as a profession runs much deeper than NCLB, and the only way to move past it is to get out of the pay-for-test-scores mindset that resembles a factory much more than a professional workplace.

Here, too, the administration falls short. While there is some support for developing new means of assessing teachers, the plan for improvement boils down to data, data, and more data. Unfortunately, the easy data – the kind most likely to be collected by overstretched state departments of education – is inaccurate and demotivating. There’s a reason New York City abandoned its “performance pay” system. Unfortunately, the administration doesn’t seem to have learned the lesson.

To what extent does the proposal actually pass its costs down to the states and districts? This is the same funding problem NCLB brought into painful clarity; the federal government tends to ask states to do much more than it pays for when it comes to education.

The Obama plan is an improvement over NCLB on this count, featuring several formula grant increases and new expenditures targeted to high-need areas. However, its reliance on the aforementioned competitive grants means that states will still spend a lot of money on things the federal government won’t pay for.

K-12 Classroom Only vs. Wide View

How broad is the proposal’s scope? Policy that ignores the myriad factors outside K-12 classrooms that drive down student achievement – most specifically, poverty and its associated effects on school readiness – can only realize limited gains.

This is one of the strongest parts of the administration’s plan. It supports the extension of literacy support to the pre-K level, it formalizes support for Promise Neighborhoods and other community-connected programs that provide students with support from cradle to graduation. In too many ways to go into here, this proposal generally takes a wide view. The only criticism is that, other than literacy support, it does not address early childhood education in any significant way. Still, the policy breadth here is admirable.

In sum, then, the Obama plan is an incomplete mechanism for addressing school change, mainly because of its reliance on performance pay and lack of local flexibility. However, it has some areas of noticeable improvement over NCLB, especially in taking a wider view of the factors outside the classroom impacting student achievement.This is the first in a two-part series. Tune in tomorrow for our analysis of the conservative counter-proposal and some closing thoughts.