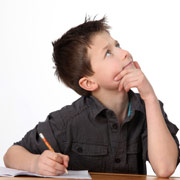 Yesterday, we analyzed the Obama administration’s proposed alternative to No Child Left Behind. Today, we’ll take a look at the conservative counter-proposal, introduced as five separate bills by Senators Alexander, Burr, Isakson and Kirk. We use the same scoring areas as we did yesterday, with an explanation included again for each one to provide context.

This is part two of a two-part series. Read part one here. 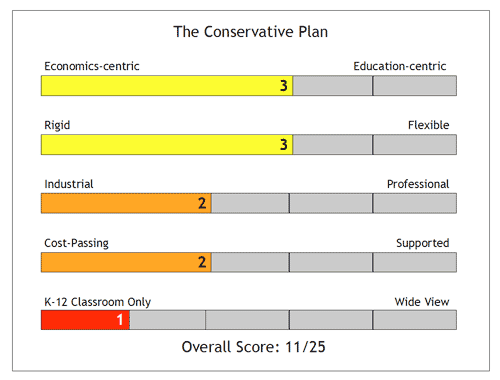 Does the proposal seek to create an education market (economics-centric), or does it focus on driving innovation and change through our traditional public schools (education-centric)? Counter to conservative propaganda, our public school system has a record of innovation and development; focusing on inter-school competition undermines actual school improvement.

Compared to some other education reform proposals, this particular conservative plan is relatively restrained in its free-market mindset. It does emphasize charters and school choice more broadly as driving innovation, and it does so more strongly than the administration’s plan, hence the lower score. Innovation within the public schools is generally assumed only to be possible by adapting best practices from charters. This is different from the Obama plan which explicitly emphasized the innovative capacity of traditional public schools.

How much freedom does the proposal give states and local districts in addressing the educational needs of their communities? NCLB is infamous for its one-size-fits-all assumptions about education reform.

This is the only area where the conservative plan outscores the administration’s plan (which received a score of 2 out of 5 on this measure). This is in part due to reactions against specific elements of NCLB – in particular, the Adequate Yearly Progress (AYP) measurement system, the “highly qualified” teacher definition, and the 100% student math and reading proficiency by 2014 achievement goal.

The conservative proposal eliminates or significantly rewrites these identified areas of difficulty to give the states more power in defining a “career and college ready” goal, appropriate standards, and state-by-state evaluation systems for teachers and principals. Many of the basic complaints and revisions overlap broadly with elements of the President’s proposal, but the conservative alternatives tend to lay down fewer guidelines defining what states are required to do.

How professionally does the proposal treat the educators who will need to carry it out? The disregard of teaching as a profession runs much deeper than NCLB, and the only way to move past it is to get out of the pay-for-test-scores mindset that resembles a factory much more than a professional workplace.

The conservative proposal, like the President’s, does not do much at all to move past a pay-for-test-scores approach in its treatment of the teaching profession. Little to no attention is given to teacher pay, work conditions, recruitment, training, or support. Instead, states are simply encouraged to focus on evaluation systems. That these allow for more sophistication than a simple value-added pay scheme is the only thing keeping this score from dropping lower.

To what extent does the proposal actually pass its costs down to the states and districts? This is the same funding problem NCLB brought into painful clarity; the federal government tends to ask states to do much more than it pays for when it comes to education.

In an effort to reduce the number of targeted programs, the conservative plan eliminates many specific federal programs aimed at improving schools. It consolidates the funds into two broadly themed foundational grants, but does not do anything to increase the level of funding.

K-12 Classroom Only vs. Wide View

How broad is the proposal’s scope? Policy that ignores the myriad factors outside K-12 classrooms that drive down student achievement – most specifically, poverty and its associated effects on school readiness – can only realize limited gains.

This is the Obama plan’s strongest area, but is the conservatives’ weakest. Their proposal does nothing to address education effects outside of K-12 schools. What’s more, they suggest limiting change efforts only to the bottom 5% of schools. This highly restricted vision severely dampens the potential effectiveness of the proposal.

Looking at the two plans side by side, a few things stand out. First of all, the Bush era NCLB has combined with the Obama era Race to the Top to institutionalize a broader federal role in education policy (without a commensurate increase in material support for education). While the conservative plan is marginally more flexible – reflecting the deep conservative suspicion of all things government – it is also tragically limited in scope.

We can and must demand better of our policymakers, especially if we are to move past the demeaning ineffectiveness of NCLB and the conservative “reform” mindset it represents.