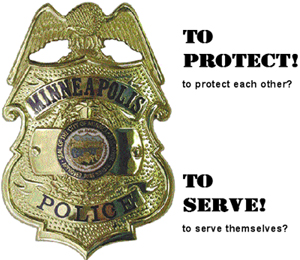 Is the Minneapolis Police Department out of control?

In May of this year we published an article by former Minneapolis Police Chief Tony Bouza, “Unintended Consequences,” in which he said, “cops’ unions have gathered such enormous political power that they’ve made it virtually impossible to fire the 1 or 2 percent of malefactors in the ranks. And these thumpers in the police ranks, although, for certain, a fraction of the forces, set the tone and define the limits of action that guide their tolerant overseers, most of whom are members of the same union … and a parade of judgments and settlements served as mute proof of the cost of having out of control cops all over the state.”

Consider the example of Jason Andersen. During his initial training at the Police Academy, he was heard to use racial slurs. He was hired anyway. He is the officer who shot Fong Lee. According to reports in the Star Tribune a gun that had been recorded as part of the inventory of the Minneapolis Police Department Property Room was planted near the body to substantiate Andersen’s claim that Fong Lee had a gun that would justify shooting and killing him. For these actions, Police Chief Dolan pinned a medal of valor on Andersen. He was convicted of domestic assault and was reinstated into the Department. He is under investigation by a Federal Grand Jury for allegedly kicking a young African-American in the head while the subject was under arrest. Upon returning to work he refused to take a drug test, and the City was powerless to insist.

Certainly the behavior of Jason Andersen is not typical of the behavior of the MPD. Yet, the fact that the City cannot discipline this officer and in
fact rewards him for criminal behavior suggests the City condones and approves this behavior.

Southside Pride asked the Mayor and members of the Excecutive Committee whether they thought the MPD was out of control and, if so, what would they
do about it. I wrote at least two e-mails to each of them and followed up with phone calls. The Mayor would not comment. Council Members Lilligren and Johnson did not return my messages. Green Party Council Member Cam Gordon has outlined a series of proposals in a thoughtful and reasoned piece included in this issue.
Is it possible that the DFL does not consider police malfeasance a problem or a priority?

Yet, the City of Minneapolis has paid out $9.5 million from 2005 to 2009 for claims against the Police Department for police brutality and the use of excessive force.
Council Member Glidden, the only other DFL member of the Executive Committee, did take the time to answer some questions. She would not clearly admit the City had a problem with police malfeasance, however, she did say, “Is there room for improvement? Yes!” For the most part she said she couldn’t comment on employer/employee relations, but she does believe discipline is happening where it is appropriate. She agreed that civil service rules are a challenge, but she thought we had “really excellent people” on the Civil Services Commission, and she does not anticipate supporting changes to the rules or to the Commission. Citing her experience as a lawyer specializing in drawing up employer/employee contracts, she believes the problem exists in the contract.

I asked Glidden if she agreed that the level of proof necessary to discipline or fire a police officer for malfeasance should be at the criminal level of beyond a reasonable doubt, rather than at the civil court standard of preponderance of evidence. She wasn’t sure, but the standard was something that could be negotiated in the upcoming contract.

The difference between the two standards is most obviously demonstrated in the two O. J. Simpson trials. In the criminal trial, Johnnie Cochran was able to get Simpson off because a jury couldn’t convict beyond a reasonable doubt. In the second civil trial, Simpson was found to have murdered his wife and was forced to give up all his money to support a trust fund for their children because the preponderance of evidence pointed to his guilt. In order to discipline or fire police officers, investigators must prove malfeasance beyond a reasonable doubt, yet, in order to collect on civil damages resulting from police malfeasance the victim must only prove that the preponderance of evidence supports their claim. Thus, a cop can beat a suspect and not be disciplined for it, and, yet, the City could be forced to pay out hundreds of thousands of dollars to the victim. So, the cop gets off, the victim gets compensation, and the taxpayer gets stuck with the bill.