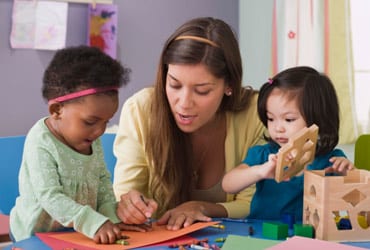 My personal misgivings about the competitive Race to the Top structure aside, I do wish Minnesota well in its quest to receive a $45 million grant from the RTTT Early Learning Challenge.

Minnesota recently submitted its application for the early childhood round of the federal education grant competition, and there’s a lot of good stuff that’s built into the proposal. After collecting input from dozens of major stakeholders and three state agencies, the proposed plan—most of which will likely go into effect whether or not we get the federal grant—represents a significant step forward in building a cohesive statewide system of early childhood programming.

The Minnesota Departments of Education, Health, and Human Services are willing to pool $105 million dollars, which would be complemented by the $45 million in federal money if we win the grant, to better standardize the goals, assessments, and transparency of early childhood programs in the state.

Already home to a relatively robust early childhood framework, Minnesota still lacks the kind of significant participation that would really make a difference in improving long-term outcomes in education. This is in part a matter of access, making sure high quality programs are operating with enough capacity in the right areas. By advancing the use of a statewide quality ranking system, we will be able to better determine which programs represent the best investment and provide the state-level support necessary to increase their presence in high-need areas.

Perhaps the proposal most likely to be controversial is the planned universal assessment and data system. This would allow providers to store and transfer between themselves not just demographic information about students, but standardized assessment data as well. Those who are particularly anxious about the spread of testing culture may imagine toddlers spending hours in front of bubble sheets. However, there are enough ways to assess student progress that don’t require such a contrived, spirit-numbing exercise.

Closing learning gaps in early childhood is one of the best ways for the state to set students up for long-run success. Too many students show up for kindergarten unprepared for success, and gaps often break along class lines. Closing achievement gaps early, while they are still small, requires much less effort than trying to close them in later grades.

So long as families can be assured that the assessments will not interfere with kids’ ability to be kids, this could prove to be a very good development. If we can further expand access to and participation in family support coaching and programs during a child’s first years of life, we would be able to better help new caretakers make good decisions for their child’s long-term development.

Now, when I say “good decisions,” I don’t mean the government should be dictating how day-to-day life should operate. I mean teaching families, for instance, that regularly talking like an adult to a baby (instead of using “baby talk”) helps them develop their vocabularies faster. Watching adults talk on television doesn’t have the same effect, and children from families of all classes and races do better when they’ve been exposed to lots of in-person adult talk. These effects hold even (some might say especially) before children are able to speak themselves.

The early vocabulary gap is the kind of thing that can stay with children for a lifetime. Trying to counteract it even as early as kindergarten requires a lot of energy. This is why I’m excited to see the partnership between education, health, and human services at the state level around this issue. It’s the only way we can really get a handle on this.

Of course, there will be opposition to this from many different directions. Michele Bachmann’s old pals at Education Liberty Watch will raise a ruckus because they don’t think the state should get involved in early childhood at all. They are paranoid and wrong, and we should make sure that early childhood programs are vocally supported from as many voices as possible to counteract them.

I will be disappointed if the Obama administration does not give Minnesota a grant, leaving us to do all the heavy lifting ourselves. Progressives should make it a point going forward to advocate for more federal support for education, especially if the federal government is going to keep involving itself with education as heavily as it has during both this administration and the previous one. There is so much to gain from a meaningful investment in early learning that it’s shameful to make states fight over who gets the money to make it happen.