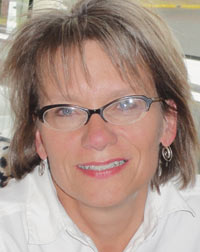 Our son, Corporal Andrew Wilfahrt, was killed in Afghanistan in February 2011. He was a military policeman in the U.S. Army and was patrolling a bridge on a Sunday morning when an IED exploded underneath him.

Andrew was gay. He enlisted in the Army when Don’t Ask Don’t Tell was still official military policy. He had to hide a part of himself to join and succeed in the Army. Surprisingly, he found the Army community to be quite accepting of gays and lesbians. In our last phone conversation he told me that “everybody here knows that I am gay and nobody cares.”

Here was a young man who was willing to closet himself and risk his life in an attempt to do something relevant and meaningful, then died in a conflict officially known as “Operation Enduring Freedom.” Freedom—a principle we as a nation rightfully espouse elsewhere, but at times forget the value of here at home.

It is not lost on this family that Andrew died protecting freedoms that he himself could not enjoy-the freedom to marry the person he loved. In a bitter twist, the Minnesota Legislature decided to put this freedom to marry for all Minnesotans up for a vote, just three months after Andrew died.

Minnesotans will vote in November on who can legally marry in this state. It’s an important vote, and we should be armed with as much information as possible to make an educated decision.

For starters, amending the constitution must be done carefully and rarely. Our Minnesota Constitution is a body of principles-it embodies rights and freedoms and has never been amended to restrict or limit freedoms for our state citizens. This amendment is completely unnecessary as Minnesota currently has a law in place excluding same-sex couples from marriage. If this amendment does not pass, nothing will change in Minnesota. If this amendment passes, Minnesota will forever shut down the conversation in our state about marriage and who should have the freedom to participate in it.

National holidays that in the past only meant a day off of work and the possibility of a backyard party, now make me sad and reflective; Memorial Day, Independence Day, Veteran’s Day. I now have a stake in the ground, a solid reason to pause and ponder what soldiers sacrifice and what they die for.

Our son, as do all soldiers when they enlist in the military, took an oath to protect and defend the Constitution. In November, we must do the same-protect the Minnesota Constitution from limiting freedom. Defend all our citizens. Vote no on this constitutional amendment. I will.

Lori J. Wilfahrt works at 3M and lives in Rosemount. Since her son’s death, both she and her husband, Jeff, have been speaking publicly about the repeal of “Don’t Ask, Don’t Tell” and the anti-Marriage Amendment that will be on the 2012 ballot.