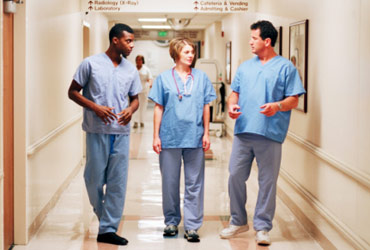 Since fiscal austerity is currently “in,” Congress created the Super-Committee of six senators and six representatives to lower the deficit by $1.5 trillion or trigger broad-based cuts of $1.2 trillion.

This is part one of a two-part series.

A major driver of our deficits is growing health costs. These costs have more than tripled since 1990, and grown eight times over since 1980. If nothing is done and current trends continue, health costs which currently eat up 16% of U.S. GDP would consume almost half our spending by 2050. Even more cautious estimates suggest we’ll spend 37% of every dollar on health care come mid-century.

Could this be the atmosphere finally needed to rein in America’s out-of-control health costs?

Here’s hoping the Super-Committee is up to the task, because the trigger certainly isn’t the solution. Rather than wisely realigning incentives, Suzy Khimm reports, “the CBO estimates that some of the automatic cuts would actually increase net costs because of how some programs are structured.”

When you need a scalpel but use an axe, the axe often does more harm than good.

Early signs, unfortunately, suggest the conversation isn’t headed in the right direction. House conservatives prefer to sacrifice Medicare’s bargaining power by transforming the program into subsidies used to purchase private insurance. Even worse, their plan controls costs by limiting the size of the subsidies even as health insurance costs continue growing.

Other recently-proposed changes, some of which show up in President Obama’s deficit reduction plan, include charging higher co-pays for home health care and other Medicare benefits, raising Medicare deductibles for outpatient services, and retooling the Medicaid state payment formula. Also, since the summer-long debt ceiling battle, the specter of raising the Medicare eligibility age from 65 to 67 has loomed in the background.

The problem with nearly all of these proposals is while they reduce the federal government’s share of our nation’s health bill, they do nothing to reduce the size of that bill itself, instead shifting costs to states or citizens.

Raising Medicare’s eligibility age is a prime example. According to the Center on Budget and Policy Priorities, doing so would save the federal government $5.7 billion in the first year of full implementation while increasing national health costs by $11.4 billion. With health costs growing so rapidly, it’s worse than useless to focus on federal savings if they only serve to accelerate our growth problem.

The greatest service the Super-Committee can perform for the federal government and for our nation is to find ways of bending health spending’s cost curve. While there are no silver bullets here, there are ideas that must be on the table if the United States hopes to slow its health cost growth.

First and foremost, Americans need to stop spending money on methods of care with no feasible benefit for quality or longevity of life. Right now, our fragmented system often doesn’t tell us which methods to avoid, but that should change in coming years.

The Affordable Care Act created the Patient-Centered Outcomes Research Institute (PCORI), which will fund research to answer these kinds of questions. While PCORI has no authority to decide what procedures are or aren’t covered by public and private insurers, bending the cost curve might mean using PCORI’s findings to make those decisions.

For instance, Medicare could charge higher co-pays of seniors seeking procedures shown to have no benefit, or reimburse doctors at a lower rate for such procedures. A more drastic move would have Medicare drop coverage of such procedures, and seniors wanting them could either pay out-of-pocket or buy private supplemental insurance for them.

The most rampant examples of these ineffective procedures usually grow out of over-testing. For instance, Professor Michael LeFevre of the U.S. Preventive Services Task Force reports, “Colon polyps take 10 to 20 years to become cancerous, while the risks from colonoscopy, including intestinal perforation and heart attack, substantially increase after age 80.”

Yet surveys show as many as half of Medicare recipients receive colonoscopies more frequently than is shown to be beneficial. Why? As Kaiser Health News explains, “Many doctors say it’s easier to simply order a test than to discuss its risks and benefits with patients.”

Dr. Lisa M. Schwartz goes into further depth, saying, “Unfortunately that’s how we’ve measured quality: Did they get tests? And doctors are being judged and paid accordingly. So all these crazy things get done that don’t help people.”

Realigning Medicare’s payment structure to discourage useless or even harmful care strategies would incentivize having these difficult but necessary conversations and begin to transform our medical system.

Whenever discussions of limiting benefits come up, someone always tries to shout them down by labeling them “rationing.” But making decisions on what to cover in full based on PCORI’s findings doesn’t ration benefits at all, because the methods being “rationed” aren’t beneficial.

For now, the Super-Committee ought to look at existing studies on non-beneficial care; in the future, Congress should look to PCORI’s findings.