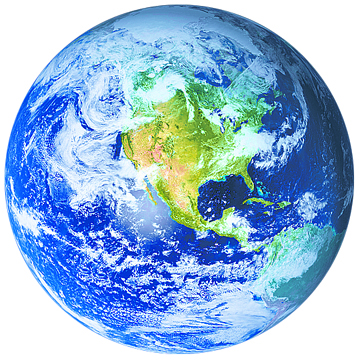 “When one tugs a single thing in nature, he
finds it attached to the rest of the world.”

The first Earth Day on April 22, 1970 was initiated by Senator Gaylord Nelson of Wisconsin. A catalyst was the publication in 1962 of Silent Spring, the best-seller by Rachel Carson, alerting many people for the first time to critical environmental problems. Senator Nelson insisted that the first Earth Day activities be organized at the grassroots, not from Washington, DC. The participation of an estimated 10% of Americans drew extensive media attention.

At that time there were no regulations to prevent industry from polluting the air, water and land. The Environmental Protection Agency was founded in late 1970 during the presidency of Richard Nixon.

A new era of awareness and activism about the caring for the earth was launched. The photograph of the earth taken from outer space by the Apollo 17 space mission on December 7, 1972 quickly became the icon of the environmental movement and gave planet earth a new identify: “The Blue Marble.”

“There are no passengers on spaceship earth. We’re all crew.”

An energetic, promising start to increased stewardship of the planet slowed when corporate powers fought back against regulations that could inhibit their earnings. Scientific studies emerged indicating that pollution produced by human activity was changing the world’s climate. As this data was confirmed by more and more creditable scientists the effort to debunk the data also accelerated. The idea that global warming is a hoax became a key propaganda point of right wing extremists. Think tanks funded by the oil-billionaire Koch brothers, and others, generated studies that sought to disprove scientific research, or at minimum cast enough doubt to persuade the public and limit government regulation.

Dedicated environmentalists pushed on to educate the public about the critical need for private, corporate and government action to protect natural resources, despite well-funded opposition. Although it became an established fact that the course we are on is not sustainable, many in the general public remained either unaware or apathetic. Far too many Members of Congress had become horribly dependent on money from big donors for their campaigns and reluctant to advocate against these special interests.

“Although some of the planet’s resources are finite, the reason
for unwarranted optimism is
that the human mind is unlimited in its capacity to think, grow, plan ahead and act in terms
for the common good.”

Many now believe the tools and knowledge are available to stop degradation of the planet and even to reverse some damage. Public opinion is increasingly in favor of government action to protect the environment and activism has accelerated in recent years. Bizarre weather like 80 degrees in Minnesota in March may be influencing people that climate change is real and needs to be addressed.

Bill Moyers was referring to his grandchildren when he said “We are stealing their future. Betraying their trust. Despoiling their world. What has happened to our moral imagination? What we need is the capacity to see, to feel and then to act as if the future depended on you. Believe me, it does.” I agree wholeheartedly.

Phyllis Stenerson is Editor of the Uptown Neighborhood News. Context for this editorial and more about revitalizing American democracy can be found at www.progressivevalues.org