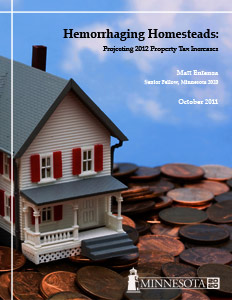 Homeowners, renters, business owners, and farmers, nearly everyone should expect to pay more in property taxes next year, despite conservatives’ “no-new-tax” promise.

Download full report (pdf) below, or view online at Scribd

As a result, local property taxes are projected to rise statewide by $376 million dollars in 2012, or about 4.6 percent, according to nonpartisan House research. The Twin Cities, suburban middle- and working-class communities and much of greater Minnesota will be hardest hit, with many seeing property tax hikes near 6 percent, according to House research projections.

For a detailed look at the property tax impacts in your particular region of the state, go to the online supplement of this report.
Respected Minnesota economists echoed progressive policy advocates in calling for a fair and balanced approached to solving the budget deficit. Instead, the conservative-controlled legislature shifted the state’s deficit burden to the state’s middle-class to protect Minnesota’s richest.
These cuts continue a long-term trend, where conservatives have slashed aid to Minnesota cities and counties, forcing local leaders to cut services and raise property taxes and fees, giving the state a more regressive tax system.

By fiscal year 2013, the state will have cut $3 billion in aids and credits to local governments, using constant 2011 dollars.

To restore Minnesota’s fiscal fairness, MN2020 calls for policymakers to: