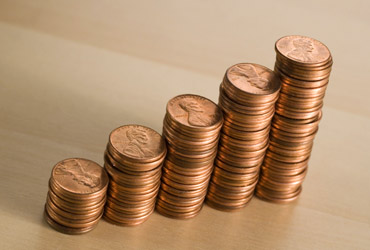 Listening to conservative legislators, one would think that state revenues have been growing like crazy—that the current state budget deficit is the result of spending run amuck. In fact, the state’s budget debacle is primarily the result of plummeting revenue.

To be more specific, during the FY 2010-11 biennium, real per capita state revenue will be at its lowest ebb in well over a decade.

“Current resources” are a measure of the total revenue coming into the state general fund over the course of a biennium from tax and non-tax sources, including dedicated revenues and transfers. During the FY 2010-11 biennium, current resources in constant dollars* were at their lowest point so far this century.

The figure below shows the trend in per capita state general fund revenue from the FY 2000-01 biennium through the FY 2014-15 biennium (projected), assuming no changes to current law. The amounts shown represent the average annual level of current resources for both years of each biennium in constant FY 2010-11 dollars per capita. 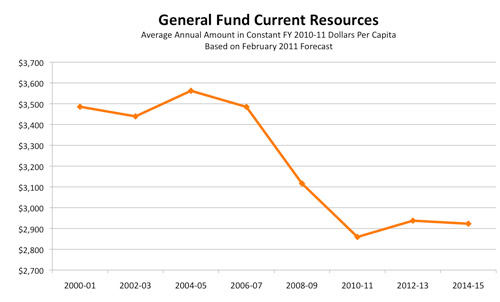 The last time that real per capita general fund current resources were as low as in FY 2010-11 was in FY 1990-91. From the perspective of the general fund, a lot has changed over this period. For example, funding for general education, income maintenance, court administration, and operating transit have all been shifted off of the property tax and into the general fund.† In other words, the state is expected to pay for over a billion dollars of new funding obligations with less revenue than it had two decades ago.

In this context, let’s examine the conservative rally cry of “live within our means.” In effect, this means two things. First, it means cutting—not just curtailing the level of growth—in the level of public services and infrastructure. It means poorer maintenance for roads. It means dramatically higher transit cost. It means fewer elderly who can afford to live in their own homes due to cuts in state assistance. It means fewer Minnesotans without affordable health care. It means less funding for education. It means cuts in these and other public investments that help make Minnesota a great state.

The second thing that “living within our means” signifies is, ironically, new revenue—but gotten in such a way so as to protect “no new tax” ideologues from having to take responsibility for it. By reducing revenue sharing with local governments, the conservative tax plan will again shift more public costs on to regressive property taxes, which are borne disproportionately by low and middle income Minnesotans. Analysis from the House of Representatives’ own research department shows that the conservatives’ tax plan will result in $400 million (five percent statewide) in property tax increases in 2012. Including cuts in property tax refunds, it will result in over $1.2 billion in property tax increases by 2014.

So there you have “living within our means” in a nutshell: real reductions in public services and real tax increases for Minnesotans with the least ability to pay. All this is done so that the wealthiest households can continue to pay a smaller percentage of their income for state and local services than less well-off families who are struggling to make ends meet.

A 17 percent reduction in real per capita state resources is not living within our means, but well below our means. Our “means” should include asking the state’s wealthiest residents to pay a level of taxes closer to what other far less fortunate Minnesotans are paying so as to avoid the sharp reduction in the public investments that make Minnesota a prosperous, livable, and humane state.

*All inflation adjustments in this analysis are based on the implicit price deflator for state and local government purchases, which is the appropriate measure of inflation for the general fund according to the State Council of Economic Advisors.