Sure, they’re still the same weird kids worshipping “Star Wars” in their parent’s basements. Only these days, that’s not someone to shove into a locker for fun.

This opinion isn’t disputed much in our society, no matter if the nerds in question like sci-fi, or fantasy, or comic books, or regular books, or television shows, or British actors (a little too much, actually), or video games—or all manner of other quirky things.

The reason for this awesomeness—the thesis of the nerd, if you will—is presented by author and vlogger John Green, who said that nerds are “allowed to be unironically enthusiastic about stuff.”

Some nerds are persecuted if they try to fully express their nerdity. I’m speaking, of course, about the nerd girls.

Apparently, a person’s gender is enough to make them totally worthless as a nerd, enough to brand them a mindless fool.

If you’re a man, you can go ahead and appreciate unironically. It’s cool, you’re doing it right.

But if you’re a woman … “Oh, do you actually like that? It’s somehow totally mystifying as to why you’d like that! You’re a fake!”

Women are accused all over the Internet (by both men and other women) for enjoying TV shows like “Sherlock” and “Supernatural” not for the plots, but for the attractive actors that convey said plots. Women who are into male-dominated fandoms like comic books or games are accused of pretending to be into nerd culture only to attract male attention.

For the people who do this, I have a few rhetorical questions that I will promptly answer for you in ranter’s fashion.

Firstly, why do you play “Call of Duty” or “Halo” or whatever your poison is? To sit down with some friends, eat some chips and get around to filling some ghosts/zombies/Nazis/robots/aliens with bullets, right?

Do you play games—any games at all, not just the two I mentioned—in the hopes that a girl will see you and decide to fall at your feet while drooling over your ineffable beauty?

Of course you don’t. You play it to sit down with some friends, eat some chips and get around to filling some ghosts/zombies/Nazis/robots/aliens with bullets. We’ve established that.

Now, I’m going to move onto the stuff that seems like it’s really difficult for people like you, hypothetical sexist gamer dudebro, to grasp. 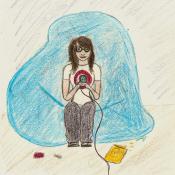 GIRLS CAN DO EXACTLY WHAT YOU DO, EXACTLY AS WELL AS YOU, AND FOR THE EXACT SAME REASONS!

And in the case of gaming, those reasons are to relax and have fun—not to end up with the saliva of an entranced female all over your shoes.

This issue doesn’t just apply to the consumers, though. In many cases, it slithers its nasty self all the way to the mainly male creators of popular nerd culture.

Superheroines are routinely depicted in skin-tight leotards with flotation-device breasts poking out like children of The Blob from massive keyholes in front. And the backs? Basically thongs over the tail ends of spines seemingly made of elastic.

These are both grossly impractical and frighteningly chauvinistic. But it’s worse when seen for what it is: Half of a double standard.

Or maybe the cosplayer doesn’t have the same physique, or skin color, or about a trillion other things that shouldn’t matter. What matters is that a woman wanted to come to a convention dressed like Wonder Woman.

This insane brand of slut-shaming was brought into the public eye last year when comic book creator Tony Harris posted on his Facebook page about the way female cosplayers were supposedly “preying on boys” at conventions.

His longer post resembled something that you’d find on the wall of a 12-year-old boy whose other interests include screaming racial and/or homophobic slurs at people on Xbox Live. But it’s not. This man, a grown man, is a respected artist for comics like “Iron Man.” What is the world coming to when even the creators of comic books berate women for wearing the same costumes that they’ve given their creations to wear?

Which brings me to a subject that Mr. Harris also briefly mentioned: “Real nerds.”

Women are constantly interrogated when they declare their love for a fandom. We’re constantly asked to recite an obscure piece of trivia, just to prove that we actually like whatever it is. Stop. It’s ridiculous.

If I tell a person that I’m into “Star Wars,” they should take that at face value rather than raise a cocky eyebrow and ask me what the species of alien that Han Solo killed in the Mos Eisley Cantina was called. Maybe I do know that, maybe I’ve been a “Star Wars” fan all of my life and spend days reading about that very information. Maybe I’m just an excited newcomer who watched “The Empire Strikes Back” last Tuesday.

It doesn’t matter! If I say I like something, and you like it too, shouldn’t we just be able to have a decent chat about it, maybe get really excited and shriek a little?

You know, be nerds?

Isn’t this just a small reflection of the world as a whole, anyway? Men are so awesome and can get through life with little flak about what they choose to do, but women are subject to so much inquiry and criticism for their choices.

I used to like being nerdy for the ways that it was so different from the rest of the world, a weird little escape. But now I see that the only real discrepancies, at least in the case of sexism, are the amount of sci-fi gadgets involved.