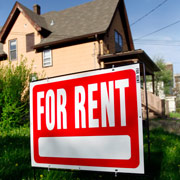 Becoming homeless wasn’t Ernestine Freeman’s plan. Yet fleeing domestic violence, she and her two children wore out their welcome staying with family and friends, ultimately finding themselves in a homeless shelter—certainly not the stuff of dreams for any mother. Ms. Freeman was crippled by anxiety and depression as she witnessed the toll taken on her children emotionally and academically.

Fortunately, Freeman was able to take advantage of supportive housing, a model approach that combines housing plus services to ensure that homeless people can remain housed successfully. But supportive housing, just like the many other effective housing programs that benefit Minnesotans, requires public investment.

That is why the Homes for All coalition, made up of 40 housing and homeless organizations, is seeking an investment of $50 million by the 2013 Legislature. This funding is meant to stabilize families, prevent homelessness, and create workforce housing to benefit people across the state. The coalition’s aspiration also includes a bonding package to meet the same set of goals. Given the sheer magnitude of housing need in the state, this $50 million investment is considered a modest step.

In 2011, nearly 280,000 Minnesota households, including about a quarter of the state’s renters, paid 50% or more of their income for their housing. This level of cost burden forces many Minnesotans into having to choose between basic needs like food and housing. 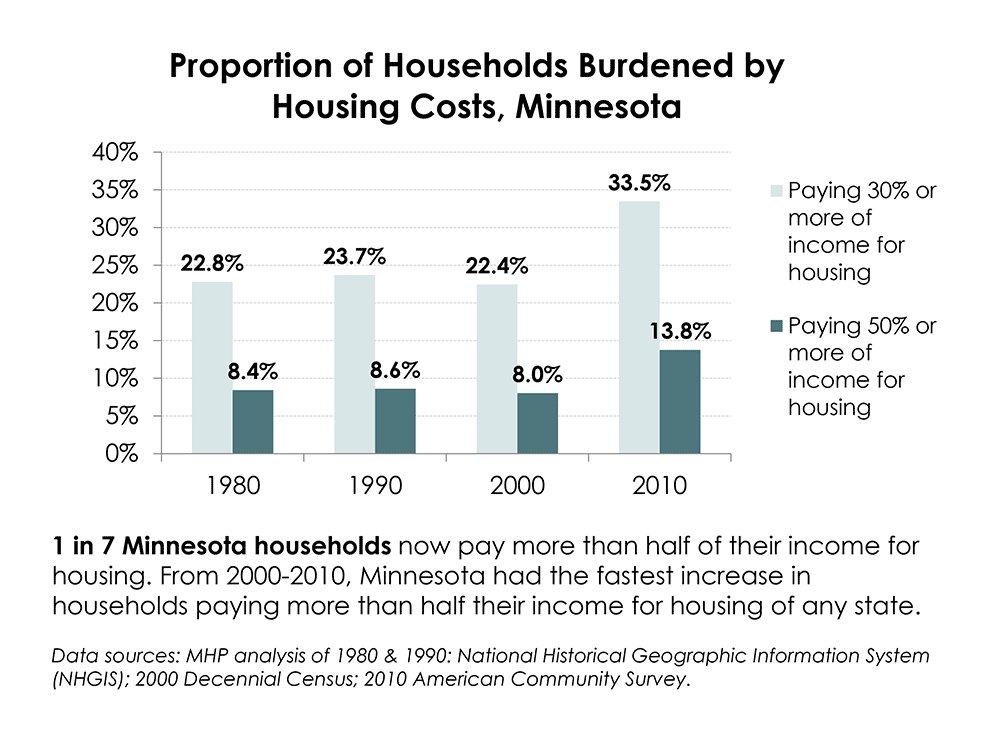 Renters in particular face a critical shortage of housing they can afford. With the foreclosure crisis, tens of thousands of former homeowners have flooded the rental market. Rental vacancy rates have plummeted throughout the state. Not surprisingly, rents are increasing as a result.

Meanwhile, falling incomes are compounding the problem of rising rents. From 2000 to 2011 renter incomes fell 16%, as rents increased 6%, after adjusting for inflation. According to the National Low Income Housing Coalition, a minimum wage worker working full time in our state would have to work 86 hours per week to afford a modest 2-bedroom apartment. 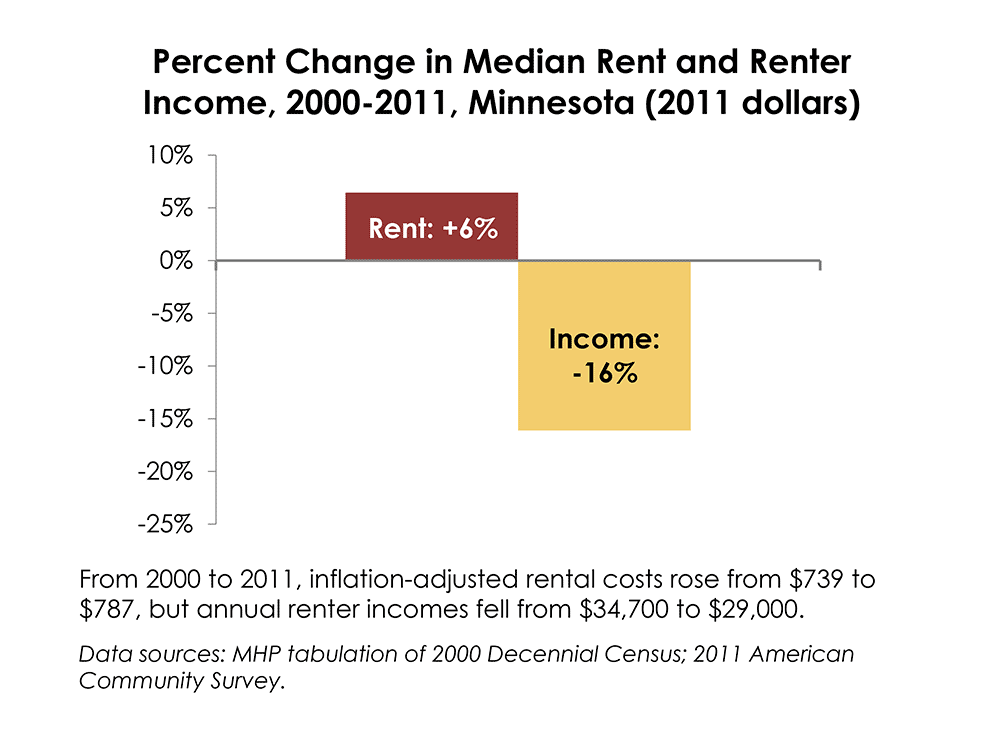 The lack of affordable housing has contributed to rising homelessness, in particular for families and children. In 2012, Hennepin County counted the highest number of homeless families in a decade. In Duluth, homelessness among children was up by 21% this school year over last year.

These bleak figures help explain why Homes for All has set an ambitious $50 million goal for this year. The hope is to devote $25 million to the Minnesota Housing Finance Agency and $25 million to the Department of Human Services (DHS) for four key programs that support homeless Minnesotans.

Together, the $50 million would benefit Minnesotans across the housing spectrum, ranging from people experiencing homelessness to renters to low-income homeowners. For example, it would ensure that homeowners get foreclosure counseling, that affordable rental housing can be built where it is scarce, and that homeless Minnesotans of all ages are served efficiently and effectively.

Trista Matascastillo with Twin Cities Habitat for Humanity, a Homes for All member, is hopeful that many more Minnesotans will have access to affordable housing and services as a result of the work of the coalition in 2013.

“Lawmakers on both sides of the aisle have been very responsive to education about the need for housing,” says Matascastillo. She adds that the creation of a housing committee this year in the House of Representatives demonstrates a commitment by House leaders to making housing a priority.

Research finds that housing investment not only helps people, it often saves money. For example, in Minnesota, supportive housing returned $1.44 for every public dollar invested in 2010, due to reduced usage of emergency rooms, police, shelters, and other services. Each foreclosure averted through foreclosure counseling saves communities, cities, and lenders an average of $52,000. And building housing creates jobs.

Now safely housed, Ms. Freeman knows how much housing and services can benefit families. Like many children facing unaffordable housing and homelessness, her son struggled socially and in school when her family became homeless. But with stable housing and a lot of support, she explained, “my son came out of his shell.” Both of her children have made significant academic strides, and her son is now reading at grade level.

As for herself, “I have the opportunity to get on my feet and spread my wings, so that’s what I am trying to do,” she adds.

While the state legislature might not be able to grant wings, making sure that Minnesotans have a safe, affordable place to stay is well within its reach.

For more graphs and MN housing data, Download this pdf.