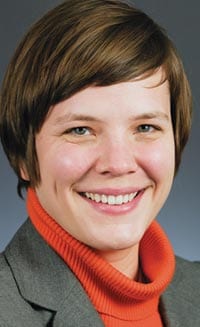 "We must not only say women are equal, we need to ensure women have the tools to achieve equality." -Kate Knuth

One of my favorite rooms in the Capitol is tucked in a corner on the second floor. It has two windows, two sinks and two stalls. The word “women” is stenciled on the door. It’s the women’s bathroom behind the House Chamber. I like the room because it’s functional; it has a nice view, and the House floor debate is piped in for easy listening. Even more, I like the room for its symbolism. The bathroom is not original. When the Capitol opened in 1905, a women’s bathroom for use by legislators was apparently not considered necessary.

In addition to bathrooms for women legislators, progress toward equality can claim many victories: the right to vote, Title IX, reproductive choice and equal pay laws. At the same time, three quarters of Americans think the United States has an Equal Rights Amendment, but we do not.

Achieving equality takes more than simply a shared belief that it is so. In my work as a legislator, I am very aware women have not reached parity in pay, elected office, executive leadership, media representation and more. Achieving equality across all sectors of society requires focused work to create opportunity for women and reduce structural and cultural barriers to equality.

Reducing barriers to equality needs to happen in all sectors, but making sure our government is a partner in this work is especially important because government is how we decide our society’s future together. In light of Minnesota’s unprecedented $5 billion budget shortfall, paying attention to the sometimes subtle ways in which budget decisions impact women is imperative.

Several budget proposals illustrate areas to watch if you’re concerned about women’s equality. A repeal of Minnesota’s local government pay equity law was proposed under the guise of reducing mandates to save local governments money. Health care, K-12 education and higher education budgets are also impacted. Proposed cuts to services for seniors, the elderly and the disabled would lessen women’s economic opportunity by eliminating nursing jobs, over 90 percent of which are held by women. Proposals to freeze pay for school employees disproportionately affect women because women hold 70 percent of these jobs. Women will enter the workforce saddled with even more debt if the proposal to roll back higher education funding to 1998 levels passes. Should a woman choose to have children, paying for quality childcare may become harder.

As the Legislature crafts a budget for Minnesota’s future, I will be keeping women’s equality in mind. We must not only say women are equal, we need to ensure women have the tools to achieve equality. When funding is slashed disproportionately for so many women’s programs, it’s not just women that are impacted. When women are better supported, families and communities are better off, too.

In terms of that corner bathroom, it not only reminds me of progress, it makes doing my job a lot easier.

Kate Knuth is a state Representative from  New Brighton.