People are spreading lies and half-truths in an effort to make the U.S. Postal Service appear insolvent, but Tuesday thousands of postal workers, letter carriers and other employees rallied in all 435 Congressional Districts nationwide, hoping to set the record straight. Not only is the Postal Service not broke, but the agency has turned a profit of $611 million over the last four years.

You wouldn’t know it from listening to many Republicans in Congress, however. They claim the Postal Service is $20 billion in the red. 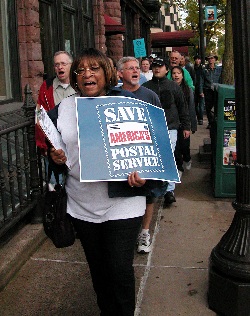 Left: Demonstrators made their voices heard at a rally in St. Paul. (Photos by Michael Moore)

“These people are trying to create the illusion that the Postal Service is losing money, that we need to close down post offices, eliminate employees, consolidate facilities and relax (service) standards,” said Dan Garhofer, president of the St. Paul branch of the National Association of Letter Carriers.

But how can Republicans claim – with straight faces – that the Postal Service has lost $20 billion when it is, in fact, turning annual profits?

The Republican figure stems from a law signed by President George W. Bush in 2006, requiring the Postal Service to pre-fund the projected cost of its retirees’ health benefits over the next 75 years – and do it within 10 years.

No other public agency or private business faces such an onerous pre-funding requirement – and for good reason, said U.S. Rep. Betty McCollum. She addressed postal employees from her 4th Congressional District during a union rally in St. Paul’s Boyd Park.

“You have to wonder if the rules were changed (in 2006) with a long-term end game in mind,” McCollum said.

Garhofer put it more bluntly: “Outside forces are trying to dismantle the Postal Service,” he said.

McCollum is part of a bipartisan coalition of lawmakers in Congress who support House Bil. 1351, a measure designed to save the Postal Service by allowing the agency access to more than $10 billion in surplus funds during the economic downturn.

“You’re not in this for yourselves,” McCollum told the Postal Service employees. “You’re asking for this country to know that the mail service will be there, and it doesn’t make a difference if you’re a billionaire or a senior citizen on a fixed income. That stamp treats everyone the same.”

Bobby Kasper, president of the St. Paul Regional Labor Federation, told Postal Service workers the right-wing attack on their jobs is part of a nationwide effort “to destroy the American worker, to attack the middle class.”

But the Postal Service may prove a tricky target for Tea Party Republicans. In annual surveys, Americans have named postal employees the most trusted federal workers for six years running, and customer satisfaction and on-time deliveries are at record-high levels. 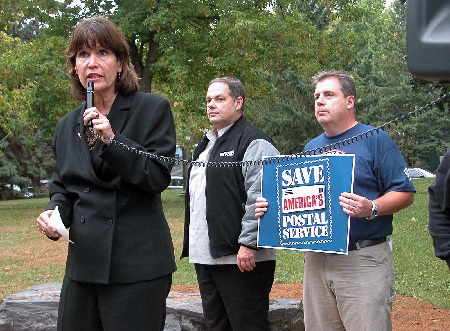 “To me, there’s no better operation,” said Carol Riehm, a 4th District resident who attended the rally to show her support for the Postal Service and its employees. “People who want to privatize our Postal Service are insane. Can you imagine?”

Garhofer said the best way to fight the Tea Party’s campaign of lies is by taking the truth to the streets, and yesterday’s rally in St. Paul, attended by more than 70 Postal Service employees and their supporters, made for a good start.

“They can talk all they want, but if we hit the ground and get to our politicians, they’re not going to be able to stop us or turn us back,” Garhofer said.