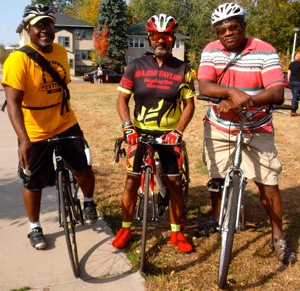 At 64, I am having the time of my life getting around town on my bicycle.

Of course, the dyed-in-the-wool cyclist might sneer at me, making mockery of my unbridled enthusiasm. The super serious cyclists, I am learning, have been riding for decades and scores of years. And they are principled in championing the virtue of being environmentally conscious in their commitment to deploy musculoskeletal energy rather than expensive biofuels for recreation and transportation mobility.

I imagine they would say to a guy like me, “What took you so long to wake up?”

Be that as it may, my rediscovery of bicycling is igniting new joy in my life. It’s like discovering a truth, or having a great experience, or learning to ride a bike for the first time, all over again.

For me, the tipping point was connecting with my friends in the Major Taylor Bicycling Club at their Urban Bike Festival, presented this summer in conjunction with Rondo Days in St. Paul.

Of course, Rondo Days in itself was a great joy. Thousands of old friends and people I was meeting for the first time, crowded in to a festival area big enough to stroll comfortably, but compact enough to reach out and touch someone.

Elbow close, you navigated through friendly smiles, energetic shrieks of kids having fun, and helpful vendors hawking information you could use to make you healthier, wealthier and wiser.

And then there was the Urban Bike Festival. Cycling guru Anthony Taylor and his Major Taylor Bicycling Club team member had it all laid out. Bicycles everywhere. Bicycles being given away to deserving kids from the neighborhood., Bicycle clinics where master bike mechanics would tune your bike or tell you stories about their love of the path.

Sports equipment businesses were on hand with promotional giveaways and genuine invitations to come visit their shops to learn more about the world of cycling and other outdoor activity.

So Anthony Taylor says to me, “I got a bike for you, Al.” He shows me a brand new Giant bike. I’m thinking, “Real cool.” But I ask, “What is it, a three speed?” Of course I had just revealed how far out of touch I was with cycling. Taylor, not making me feel stupid, said, “No, Al. How about 21 speeds.”

“I’ll take two. One for me and one for my partner B.P. Ford,” I said. And the rest, as they say, is history. In this case, it is history in the making, because I am convinced that we, as a community, can make history, create history on the biking trail. 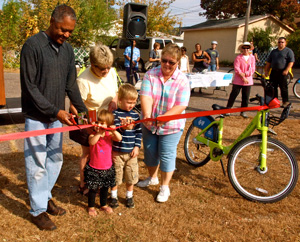 Taylor delivered my bikes the afternoon prior to the Minneapolis Urban League’s Family Day event in North Minneapolis. The Major Taylor Bicycling Club was conducting a bike ride as part of  Family Day.

The Saturday morning ride team assembled at the NorthPoint Health and Wellness Center parking lot across from the Urban League. Bikes were tuned. Bottled water and energy snacks were handed out. And off we rode west on Plymouth into Theodore Wirth Park, past the Golf Course and into a magnificently beautiful terrain that I never knew existed.

The lesson, Taylor says, is that there is a world of beauty for pedestrians and cyclists that belongs to us, that is accessible to us, and that we cannot know unless we get out of automobiles and explore the trails in our community and beyond.

He said the sense of what is our community shifts, broadens and expands as you engage the world on a bicycle or explore the marvelous walking trails.

“I want us to know more about our world, our community and this is an important, healthful, natural and beneficial way to engage the geography as you create and expand community,” he said.

After what seem like only a few minutes we were taking a break and looking at Minnetonka in the near distance. I mean, generally speaking, when you are sitting around at Plymouth & Penn in North Minneapolis, you think of Minnetonka as being somewhere far…a healthy drive but certainly not a casual bike ride away or within walking distance. Yet, here we were, in Plymouth, gazing at Minnetonka, and feeling real good that for those of us who hadn’t ridden a bicycle since the 3-speed was state of the art bicycle technology, we made it. We were back in the saddle again.

The point is this: Here is community. 20-30 adults and elders, infants, toddlers and teens, cruising together down Plymouth Avenue and beyond. This is community.

I have been riding my bike almost every day since. And right now, my mind is fixed on riding into the winter…for as long as I can ride safely. What I do know is that many cyclists ride year round, even on the most difficult snow days and when temperatures are extremely low. Here’s my attitude: If they can do it, I can do it. We shall see.

I work 3.1 miles from home. The bike ride down Plymouth Avenue and the return route up Plymouth or through the neighborhood heading west on 14th, 15th or 16th, is a joy. It is a different way of looking at the neighborhood and at your neighbors. You see things you had not noticed before and you feel the neighborhood differently.

This month included a growing celebration called Bike Walk Week. Bike Walk Week is designed to highlight the advantages of getting around in a multi-modal fashion. The premise is that bicycling and walking are more than just leisure activities – they promote better health, a cleaner environment, and can save you money.

Bike Walk Week encourages people to continue to incorporate walking and bicycling in their transportation options.

On Monday October 3, Nice Ride Minnesota launched its Saint Paul presence with a ride and tour of the new Nice Ride stations in Saint Paul.

On Thursday October 6, the October Bike Walk to Work Day encouraged those who have been walking or riding to keep going as seasons change. A Downtown Minneapolis Commuter Fair at the IDS Center offered resources to help make commuting to work easier. The day included exploring new bicycle routes in Northeast Minneapolis.

The parade and walk feature and lunch and refreshments stop behind Cookie Cart on West Broadway, where residents met the principals of the J.B. Hood Bicycle Shop. The J.B. Hood crew invents and custom builds bicycles and electric assisted bicycles and carts. Both J.B. Hood and Venture North are significant entrepreneurial investments that stand to contribute to the retooling and reinvention of North Minneapolis as a place where micro-businesses can flourish and multiply.

On Sunday October 9, the grand opening of the new 1st and Blaisdell bike lanes in South Minneapolis included ribbon cutting at MLK Park (40th & Nicollet), and bike safety at the 5th Precinct.

Bicycling is a big deal. A really big deal. In fact, Governor Mark Dayton declared October Safe Routes to School Month to highlight the benefits of walking and bicycling to school. Local, state and national Safe Routes to School efforts support walking and bicycling to school year-round based on research that shows that kids who walk or bicycle to school are healthier and arrive more focused and ready to learn.

For example, a 15-minute walk or bicycle ride to and from school each day will help kids achieve half of their daily physical activity needs.

“Walking and bicycling to school is a great way to find time to get physically active,” said Dr. Ed Ehlinger, Minnesota Commissioner of Health. “The whole community benefits when more kids walk and bicycle to school.”

In addition to the health benefits, research shows that kids who walk or bicycle to school have fewer behavior problems and tend to have better academic achievement.

“Healthy kids are better learners,” said Minnesota Education Commissioner Brenda Cassellius. “By encouraging children to walk and ride their bikes to school – and by modeling those activities as adults – we’re helping them establish lifelong patterns of fitness that will benefit them in school and at work.”

“Walking and bicycling are important components of a complete transportation system and of Minnesota’s quality of life,” said Transportation Commissioner Tom Sorel. “People of all ages deserve to arrive at their destinations safely.”

Across Minnesota, Safe Routes to School is a growing movement that has more than 115 schools reaching more than 78,000 students and staff to support more active and healthier lifestyles.

And bicycling is big in our community, really big.  A recent press release from the Major Taylor Bicycling Club talked about Nelson Vails, the only African American Olympic Medalist, being guest speaker at the National Brotherhood of Cyclists conference at the Marriot Downtown Oakland last August. The conference also featured Angela Davis, political activist, scholar and author who talked about race, inequity and justice.

Nelson Vails’ nickname, Cheetah, was derived from his career as a bike messenger in NYC, as well as his acclaimed silver medal win in the 1984 Olympics. He went on to race in Europe, Japan and Australia and race professionally from 1988-1994.

Vails remains involved in cycling through bike groups and lives in Las Vegas. On Nov. 7th, 2009, Vails was inducted into the US Bicycling Hall of Fame. He came from a poor neighborhood in Harlem and through hard work and determination broke into what was once seen as a middle class, white-man’s sport.

Anthony Taylor is Vice President of NBC. He said, “The importance of bringing bicycling to diverse populations continues to increase as health and lifestyle concerns are some of the biggest obstacles to leading healthier lives, as well as building our communities with the intention of better living.”

The National Brotherhood of Cyclists (NBC), is an association of affiliate cycling clubs open to anyone regardless of race, color, ethnic origin, religion, sex, national origin, age or disability. NBC is establishing itself as a “hub” for other cycling clubs and bicycling related organizations around the country that are working to be more inclusive and improve collaboration between newly established organizations such as the National Brotherhood of Cyclists with more established cycling advocacy groups such as the League of American Cyclists, Safe Routes To School, USA Cycling and the Alliance for Biking and Walking.

NBC was founded in 2008 by a group of grassroots African American cycling clubs from around the USA that recognized the need to create a national organization to promote a love of cycling, increase diversity, and decrease health disparities that affect all communities by raising awareness of personal health and the health benefits of cycling to diverse populations.

Major Taylor Bicycling Club highlights the health benefits and the rediscovered utility of the bicycle. “There has been a significant increase in bicycling for health and transportation and we are committed to increasing access, awareness and the opportunities for our community.  With the Support of Bike Walk Twin Cities and REI we are able to get information, maps and training to the community in one day.  We have begun a tradition of giving bikes away to community families and this year we were able to give away 60 bikes.  We are amazed at the number of community members who want bikes for themselves or their children and this turns out to be an incredible gift to the community.  We are also able to get over 100 helmets in the hands of kids to make biking safer.

“We awarded Walter Anderson and the Plymouth Christian Youth Center youth bikes that they will use as part of the personal development initiative,” he said.