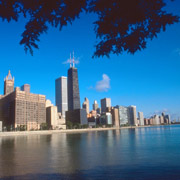 While 97 percent of scientists agree that climate change is real and man-made, many politicians are busy denying that silly ‘science’ to avoid the uncomfortable change it requires. A recent podcast from the witty duo at Stuff You Should Know covered the issue of the vast disconnect between scientists and the general public about climate change.

While the public struggles to reach consensus on the issue, some work behind the scenes has begun to prepare our most important places for climate changes. From Minneapolis to Chicago, cities are trying to mitigate or adapt. Some are even paving the way—with permeable pavement.

For those putting off preparations, that podcast, based on a HowStuffWorks article entitled, “Do doomsday scenarios discourage people from acting on climate change?” explains why. People tend to tune out or give up when provided with too much doom and gloom. This often happens when advocacy groups or media outlets report on scientific findings by using alarmist language, which is a common practice for garnering attention. The article’s author, Josh Clark, cited several studies suggesting that this alarmist language could be the cause of the low acceptance of climate change.

After all, a 2010 Gallup poll showed that 48 percent of Americans believe that the seriousness of climate change is ‘generally exaggerated.’ Surprisingly, that is 17 percent higher than the number who believed that in 1997. Clark’s conclusion was that climate change, especially when paired with predictions of doomsday, brings our own demise to our minds, causing people to downplay or deny the problem.

While the reality of climate change may not live up to some of the alarmist language that has been used, the reality of change persists. Significant progress on mitigation has been made in some areas, but our overall efforts have been slow as the basis for the efforts is still hotly debated. Meanwhile, some cities have decided to be pragmatic about a different climate in the future, opting for a less short-sighted approach.

A recent Star Tribune article examined the efforts of our Midwestern neighbor Chicago, which is quietly preparing for a much warmer future. The state tree of Illinois, the White Oak, has been taken off planting lists and increased air conditioning capacity is being considered for the the city’s public schools. According to the article, scientific projections for the city predict hotter temperatures which would have consequent strains on Chicago’s infrastructure. The cityhttps://www.tcdailyplanet.net/node/48641 is increasing its efforts to prepare and preempt such infrastructural strains.

Most attention to climate change action is focused on mitigation, but Chicago’s latest efforts are focused on preparing the city for a long-term change of climate. An article in the Spring 2011 edition of Momentum, a publication from the University of Minnesota’s Institute on the Environment, focused on this type of preparation. The article’s author, David Biello, stated that “whatever measures might be adopted to reduce emissions of greenhouse gases, the world will still need to adapt to a changing climate.”

Biello went on to outline the preparations made by those most affected by changes, and explained why mitigation isn’t enough, stating “just as a bicycle keeps moving after you start to brake, climate change doesn’t halt the instant we act to slow it.”

Progress has been made in Minnesota on mitigation efforts. Besides efforts to increase awareness, Minnesota’s public agencies have started to incorporate environmental sustainability into their practices, thanks in part to a recent executive order from Governor Dayton. Meanwhile, the Twin Cities have been acting on climate change mitigation through various means. Minneapolis has used climate change grants over the past several years to reward efforts to mitigate climate change in the city.

Though we have moved forward on climate change mitigation, Biello is right to point out the large-scale climate change isn’t going to halt entirely due to our noble efforts. It is time that we start to prepare ourselves for a different climate, so that future Minnesotans don’t have to suffer for our comfort-induced inaction.