I can go through a whole day without being reminded of my race. I can walk through the wide halls of Burnsville High School, talking with my friends of various backgrounds, forgetting for a time that there is only one black teacher in the entire building and that none of my advanced placement classes has more than four minority students, most of them Asian.

If all is going smoothly, despite our racial qualifiers, I feel that we are all just humans. It is only at the times when I am treated slightly differently from others, when I hold a different viewpoint or when there is a discussion about social justice or slavery that I become acutely aware of the weight and color of my skin.

The teacher lectures on about the particularly brutal aspects of slavery. I can feel the eyes of my classmates glancing at me, the only black person in the room. Some seem to be apologizing for the past. Others seem to expect a violent reaction from me. I shrink down into my chair and become intrigued by the floor, fully aware that I might be oversensitive, until my moment in the dark spotlight is over.

Is it because I’m black?

Because of this ongoing history, because everyone can always see this facet of my identity, nearly anytime a teacher or policeman or store clerk treats me differently, I have to wonder if it’s because I’m Black.

The notion that any group is inherently intellectually superior has long since been rejected. Yet there must be a reason why there are so few racial minorities in advanced classes and higher-level jobs. I’ve noticed that most of the kids who are in honors classes have been there for as long as those classes have been available to them. Most kindergarteners aren’t clear geniuses. Their parents train them early or just sign them up for gifted and talented classes, where they get extra attention and higher expectations to continue on the advanced track.

My dad read to me when I was in the womb. My parents made it clear that education was something to be valued, and I was reading by the time I was three. By the time I got to school, I was already far ahead of the curve and a shoo-in for gifted and talented classes, which started me on the honors track for life.

Many parents are able to do this because they’ve learned the value of education, and they know the system, so they can prepare their kids for school. But many minority parents have not gone through this system and don’t have the time or foresight to make the significant effort of preparing their kids. So their children have a harder time learning and are resigned to sticking with what they know.

However, this is not entirely the fault of parents trapped in invisible chains. Stereotypes are rampant in the educational system. And it can be quite hard for kids to break out of them.

According to my dad, who works as an educational assistant at a junior high and has been in this field for as long as I can remember, when teachers pick out students for honors, black kids have to be amazingly outstanding to get noticed.

I can believe this. At my own school, I often observe white kids goofing off in the hallways disregarded by supervisors because “they’re just being kids.” Meanwhile, black kids doing the same exact thing are scolded for being obnoxious, trouble-making delinquents.

There is a pervasive stereotype that dictates how people’s actions are perceived. When people act stupid, belligerent, or ghetto, it is associated with blacks and minorities. When people try to succeed, challenge themselves, intellectually or otherwise, or exhibit any positive trait, they’re told they’re “acting white.” These stereotypes are so ingrained in this society that I am called an Oreo constantly by people of all races.

Why you use so many big words? You think you white or something?

You don’t know how to fight? You can’t dance? I’m blacker than you are.

Can’t you take a joke?

I was born in New Orleans, Louisiana. In the South, it wasn’t uncommon to see Confederate flags displayed. If people didn’t like you, they made no effort to hide it. In the home of Minnesota Passive Aggression, it is all too easy to say that race doesn’t matter. But just because prejudice isn’t blatant doesn’t mean it isn’t there. Racist jokes are told only in jest. People will smile and act docile to your face and wait until your back is turned to release their true feelings.

I remember a time at play practice. A kid who was telling jokes stopped and looked at me, the only black kid in the room, and if I was Somali. I said I wasn’t, so he went on with his comedy routine:

Everyone laughed. I was irritated and offended, but I felt too uncomfortable and unsupported to say anything. It’s just a joke, right? It doesn’t mean they’re racist. Chill.

These moments are so small that they are easily written off as the imagination of a hypersensitive, angry black person, and the problem persists.

Most people have no intention of harming others or contributing to the world’s festering inequality. They have been raised to accept the status quo so they don’t realize what they are doing.

Realizing what we’re doing is the first step to fixing it. Here’s a simple challenge: When you catch yourself making an assumption about someone or treating them differently based on how they look, simply ask yourself “Why?” This small effort can make a huge impact.

Trust me, it will make you uncomfortable to see how much you make those assumptions. In class, I see a greasy, long-haired guy and assume that he’s a slacker degenerate. After talking to him, I found that he was super-nice, funny, and chipper. Now he’s my pre-calc buddy.

I see new immigrants who are not skilled in English and avoid the effort of making conversation. Sometimes I assume immigrants are stupid, even while I know this to be unfounded. When I actually push though our language barrier, I find that they’re some of the smartest, most interesting people that I’ve met.

Since the 1960s, when blacks battled for equality against fire hoses and police dogs, race relations have improved a lot. In order to keep improving, we have to acknowledge that despite all the progress, race still matters. It is only then that it won’t. 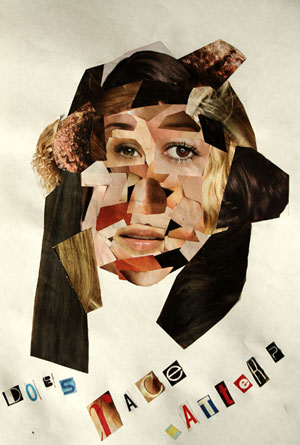 Does Race Still Matter by Breanna Goudeau
I am a sophomore student at Thomas Edison High School. I have been drawing since I was about two years old. Drawing allows me to express my most inner feelings onto paper. I hope to one day be a fashion or graphic designer. (Image: Collage of a face)