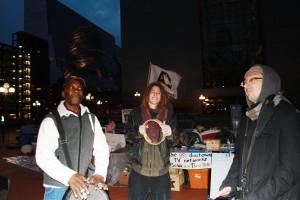 Walking onto the grounds at Occupy Minneapolis, one steps back in time to the late 1960s, an era of marked activism. Across from Minneapolis City Hall, sprawling over the Hennepin County Government Center courtyard, the counterculture lives again. There are pockets of mostly 20-something White men and women, as the old group Buffalo Springfield put it, “singing songs and carrying signs.” (As of Nov. 4, signs were prohibited by Hennepin County.)

Occupy Wall Street, initiated by the Canadian activist group Adbusters, was launched September 17 in downtown New York City’s Financial District to protest corporate greed. The scope swiftly mushroomed to the general exploitation of Americans, including bankers’ penchant for foreclosing on mortgages held by hard-working families while CEO’s continue to wallow in luxury.

It’s a push for social and economic inequality, relief from corporate corruption and influence by the financial services sector over government. The movement’s signature slogan “We are the 99%” refers to the disparity in the U.S. between the wealthiest one percent and the rest of the population.

By the beginning of October, demonstrations were ongoing or had taken place in 70 cities and, as of this writing, have occurred in more than 900 cities across the globe. That includes Duluth and the Twin Cities, where it has been dubbed Occupy Minneapolis. There is an Occupy St. Paul initiative in the planning stages.

The last hippie movement in the U.S. proved to be largely be a fad during which White youth stumped for social justice in sympathy and purported alliance with a swell of Black protest that swept the nation — before getting bored with “revolution” and switching from tie-dyes to neckties, joining corporate America, and leaving revolt in the rear-view mirror, shedding their brief alliance with African Americans like so much outdated fashion gear.

Though author-activist Cornel West has twice been arrested while taking part in Occupy Wall Street activity, there is not what one would call a notable presence of color. Similarly, thus far, Black participation in Occupy Minneapolis has been less than overwhelming.

Asked just how much Black participation there’s been, Lindh answers, “Not as much as we’d like — yet. But we do have a fairly diverse crew [of] people who are here really regularly. Sometimes people have jobs. Or, if they have other responsibilities, people kind of come in and out depending on how much time they’re able to commit. Representing different backgrounds.”

African Americans are no more conspicuously absent than are Somalis, Asians, Latinos and Native Americans. “We’d like to reach out more [and have] representation for everyone down here. We’re working on it, [to] have people know what we’re about. Have their concerns heard. Issues that they’re wanting to be addressed specific to their communities.”

The primary concern is corporate greed? “Yeah. When people ask me to summarize it succinctly, I usually say [it is] a movement that focuses on economic and social justice.” Which covers everybody subsisting on the short end of the stick — as it were, an equal opportunity crisis.

Asked whether the inclusion of Blacks matters, Occupy Minneapolis participant Ben Egerman readily states, “Absolutely. We do recognize that the movement is too White at the moment. Foreclosures affect everyone but really disproportionately [affect] communities of color at risk for predatory lending. In Minneapolis, we’re talking a lot of foreclosures in North.”

It is, of course, ironic that unrest in the face of citizens being abused should overwhelmingly be White. Mahmoud El-Kati, noted Twin Cities historian and scholar, observes, “These are the borrowed patterns created by civil rights struggle. The Civil Rights Movement reached a new point of departure in social protest. A level that had never been. More than the Labor Movement.

“And [it] was more democratic than any other movement ever with the exception of the Abolitionist Movement, which had a cross-section of participants. Not only Black and White, [but also] religious groups and so forth. The Civil Rights Movement set the model,” El-Kati says.

He reflects on Occupy Minneapolis’ lack of Black participation: “We’ve got a pattern of race relations in this country, [from] a caste system background, that Black people don’t readily, in the area of politics and so forth, respond to White-initiated things, basically, outside of the formal political structure [of] being Democrats and Republicans.

“It’s a White domain. [Blacks] are reluctant by history and the conditioning of non-participation. Nobody says that, but there it is.” El-Kati notes that including Blacks in this protest amounts to more than merely adding numbers or a social demographic.

“Let’s say this rhetoric code was transgressed in some way by Black people and they could join the Whites. The whole dynamic would change because of the presence of Black people. There would be a new chemistry, and the tension would rise.

He’s certain that, for one, arrests would dramatically increase. “Probably people would go to jail. There would be more issues from within the Black community… Black critics would be drawn into the fray.”

The Occupy movement has been characterized by largely nonviolent interaction with police. That, El-Kati says, would quickly change. “If a thousand Black people from Harlem showed up at Wall Street, some heads would be whipped. More readily whipped.”

David Daniels, Black and former vice-chair of the Republican Party’s 4th District in St. Paul, doesn’t find that speculation the least bit surprising. “I already find it interesting,” he says, “that the Occupy movements in Oakland and Atlanta, where there are more Black folks and Hispanics involved, have been met with tear gas and clubs. Whether people run away or continue to resist when that type of response happens elsewhere will be very telling as to whether long-term change comes a result of this movement.”

Daniels adds, “[The movement] must be careful not to be co-opted by the same corporate interests that created the mess. The Tea Party Movement, while coming from a different cultural demographic from those who Occupy, were upset by many of the same things. Unfortunately, it was taken over by and has become a mouthpiece for the Republican Establishment.

“President Obama is being funded primarily by Wall Street. When I went down for a brief time to [Occupy Minneapolis], I ran into Rep. Keith Ellison. I attempted to engage him regarding the role of the Federal Reserve in the economy as well as Obama’s willingness to play Wall Street’s game.

“He gave me a vague answer and quickly ran off. I don’t want to see the Occupy movement merely become a tool to re-elect Obama.”