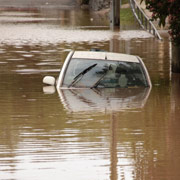 Duluth recently experienced a true “flood of the century.” In weather records going back 130 years, there is no data for any storm dropping so much rain in so little time. The flood tested…and bested…much of the city’s infrastructure. Duluth has always maintained a tenuous but respectful balance between urban development and natural functions; perhaps as a result of this storm that balance will shift a little more back toward nature.

Three things stand out for me after the floods: an ancient white pine log floating on the beach, a shed floating in the harbor, and a brand-new street buckled by floodwaters.

The white pine log convinces me this was in fact the flood of the century. Easily two feet wide with a good stand of moss and even grass growing from it, with jagged ends instead of neatly sawn caps, it was a remnant of the turn of the 20th century, a broken giant that drifted in a flood down from the St. Louis River pineries 100 years ago to find a resting place in some high river bank, where moss and grass took root.

The 2012 flood was even higher than the previous flood, and lifted this rotting wood from the forest, then took it down the river, out into Lake Superior, and finally back onto land on the sand beach of Minnesota Point…the grass still standing straight up. That log had an honored and probably fully natural life cycle.

What about that shed? Why was it floating in the Duluth harbor? Stunning rains turned every trickle into a torrent and every river into a disaster zone. And somewhere in the Duluth area, one of these floods of water tore someone’s shed from their yard and sent it downstream to the harbor.

Why does our government create rules that say how close to streams we can build structures? It’s not to punish the wealthy landowner who really wanted a creek-side deck. It’s not to arbitrarily restrict a landowner from accessing their property. It is for the common good. Especially in Duluth, flowing and standing water knit our community together in a web of mutual responsibility. Zoning laws keep that system fair and impartial.

The owner of that shed suffered significant personal loss, and my heart goes out to them. But there’s an excellent chance that shed was built too close to the edge of a stream. I’m torn too about a friend of mine whose house stands just about the St. Louis River along the riverbank; his family home of 35 years was flooded and he has no flood insurance. The flood turned thousands of private actions into public concerns. Zoning works. Setback rules are there for a reason. But individuals will continue to live and build in places that, in the grand scheme of things, aren’t in the community’s best interest.

In an eastern Duluth neighborhood, one landowner built a private bridge across a quiet creek. When that creek went crazy last month, it washed the private bridge into a well-built public bridge. As a result, the bridge became a dam and the river flooded and then destroyed the adjoining street.

Besides demonstrating the importance of zoning rules, the storm has given Duluth an opportunity to reinvent itself, to be more respectful of the natural processes that underlie this city on a hill.

The storm caused around $100 million in damages. Nature re-established herself in surprising places: a waterfall emerged below the food co-op and a dammed creek tore down its dam and restored its own brook trout habitat.

As we rebuild Duluth, we need to build smarter, not bigger. Just because a thing got broken doesn’t mean we need to fix it. The climate is changing, and this year’s 100-year flood will soon come every five or ten years. While our aging infrastructure needs to be tended, nature needs to be free as well.