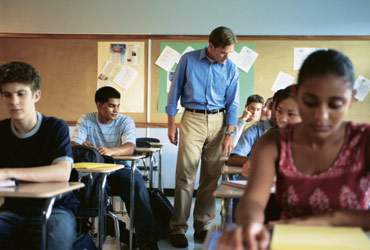 As I and the St. Paul pilot team began to work on analyzing the English Language Arts Common Core standards, I had reservations about who designed them. Was this another group of people trying to drink from the trough that should be funding public education? I got my answer in November when I attended a conference sponsored by the Council of Great City Schools and got to speak directly to the co-writers of the standards and architect David Coleman. Then, the pieces began to fall into place.

This is the second part of my experience with effective Core Competency instruction. (read part 1)

Coleman was very clear that he created a non-profit to oversee implementation of the standards, but it is funded independently by foundations. He takes no fees and he will endorse no products or tests. He is trying to be as authentic as he can be. In a world where everyone is a consultant with few years of classroom experience, but a lot of high-priced ideas on what teachers should do, Coleman is an exception. His principled stand impressed me. His lesson wowed me. He was clear that he has not been a classroom teacher, but his lesson established his integrity.

Coleman led a group of teachers through an exploration of two poems that trumped any previous workshop experience I have known. It was a masterful example of the power of text-based learning. He did not tell anyone what anything meant. He asked us to think.

“This is an equity issue,” he said then, and many times before and since. Herein lays one of the subtle but profound differences in the new English standards. Instead of front-loading information such as vocabulary or a history of Classic Greek theater, Coleman says we teachers need to take kids directly to the text. Every time we ask a student if they have heard of Sophocles, we are losing students in the room who have not. When we give students a bunch of vocabulary and contextual information, we are telling them that they need to know all of this stuff to be able to understand the text—and we turn off the very students we most want to engage. “Take them to the text,” Coleman says, and you teach them they can do it.

Coleman has been criticized by educators for being too focused on preparing kids for college and careers and neither on the literature at hand nor students’ own experiences. Yet, that afternoon in November, he had a room of 100+ educators joyfully explicating Dylan Thomas and learning from a poem they thought they knew.

Science teachers joined in to help us understand the significance of the light imagery. It was a perfect moment where teachers experienced the joy of learning, the experience we hope to bring to every child. Coleman says that too often students can discuss their own experiences in a class and avoid ever reading or addressing the text assigned. If they are only discussing what they already know, what are we teaching them?

Coleman also says the new standards for English involve three shifts: A greater focus on “content-rich” nonfiction, reading and writing grounded in evidence from the text and a focus on increasingly complex texts. The complexity of text with which students can engage is a predictor of college success, he says.

Accepting his challenge, I returned to teach Antigone to my 10th graders. I provided no “History of Greek Theater” lecture, no vocabulary. We opened the text and began looking at the character list. Then, we started reading the play with students taking roles. Every half page, we stopped to discuss what they had heard through the lines. I had kids holding up their hands who had never raised a hand before.

They got it. Once they began to study the text, their questions and ideas drove our study. They came into class every day ready to get to work. As the unit progressed, I handed more of the discussion off to the students until small groups were completing the play on their own. The “trial” I have often used at the end of the unit was richer and the students ended with writing an argumentative paper that examined Antigone’s side versus Creon’s (a required paper under the new standards).

I consider myself a pretty rigorous teacher who has learned to keep her interpretation to herself and not trample on students’ ideas, but my experience with teaching the Common Core the way David Coleman envisioned it has regrounded me in my earliest belief that my job is to help students find their own answers. Every time I tell a student what “it” means instead of stopping to think of a question that will guide their own discovery, I am limiting that child’s opportunity to figure it out.

So here, as I enter my second year with the Common Core standards, I am a believer. The Common Core is an antidote to the rote, formulaic curriculum bred by standardized testing. The two testing consortia that are designing tests off of the Common Core have worked closely with AFT and Coleman. While I, like most teachers, am tired of students being measured by these high-stakes instruments, the Core was not designed to fit a test, and the effort to build the tests off the Core likely ensures that they will be better tests than the poorly formulated tests we have currently. (Minnesota does not belong to the consortia and is designing its own tests.)

In fact, the Common Core standards, with their text-based, inquiry focus offer our students opportunity for joyful learning, for sharing and growing. They provide us with a philosophy of student learning as rigorous and collaborative, with students making their own meaning. That is sorely needed. Will they have a greater impact than previous standards? The answer depends on how well we stick to the text, or, in this case, the standards.