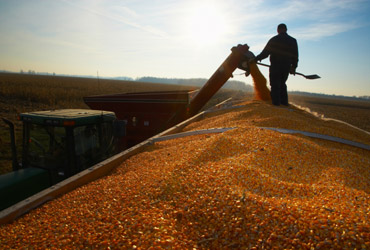 Here’s a Minnesota perspective on Washington’s budget battles: The federal farm program, at least, is working as intended.

Part one of a two-part series

You have to remember, federal agriculture spending also pays for critical programs far from the countryside. Such cuts would undermine federal efforts to improve public health through nutrition and access to food, protect the safety of the food supply, stimulate local economies through rural economic development, and support environmental and conservation efforts that are important to all Americans.

“We need to take our hits just like everyone else,” admits Rep. Collin Peterson, the Northwestern Minnesota DFLer who chaired the House Agriculture Committee when the current farm program was written. “We shouldn’t take a disproportionate hit that will cut into the infrastructure of our economy.”

The bill Peterson heavily influenced is set to expire in 2012. Therefore, over the next year and a half, food and agriculture interests will engage various ideologues, academics, people of faith, opportunistic investors and concerned citizens over new multi-year omnibus legislation, generally called “the farm program.”

The farm program is actually a comprehensive mix of programs that touches the lives of all Americans and not just the one percent of U.S. population that still derives its livelihood from food production. Meaning that is it both a “safety net” for agriculture and “infrastructure” for our far-broader economy.

That is what is at stake for Minnesota and other Midwest agricultural states as the farm program becomes a key target for budget cutters and progressive advocates seeking to expand its reach.

New ideologues in Congress with various libertarian, anarchist and objectivist agendas would prefer to shut down food and farm programs entirely. Academics and citizen groups would tweak the federal laws, changing emphasis from current support of agriculture to more economic development assistance for rural America, more food assistance to vulnerable Americans, more renewable energy research and development, and more assistance to agriculture development worldwide as humanity strives to feed itself in the face of rising population and shrinking resources.

Much is at stake for Minnesota. Agriculture and the food chain are huge and currently strong sectors of our economy. Whether they remain healthy will depend on non-agricultural influences, such as global economics ranging from finance to energy supplies.

“What’s different now from past (battles) is that we’ve got economists saying world markets have changed and farm prices aren’t coming down,” Peterson said in an interview. “I don’t believe it.”

Long-time observers of farm economics would agree with him. Finance problems with the so-called PIIGS (Portugal, Ireland, Italy, Greece and Spain) can topple the economy and curtail trade, crashing the farm economy. Runaway inflation in China or similar problems with BRIC (Brazil, Russia, India and China) could do the same, depending on those countries’ responses. And any further turmoil in the OPEC countries disrupting the oil pipeline or self-inflicted, pro-recession measures in Washington such as failure to raise the debt ceiling could have the same effect on the entire global economy.

Against this backdrop, the Wall Street Journal recently observed that federal payments to farmers under various programs will fall to $10.6 billion this year, from $24.4 billion in 2005. What have disappeared are the commodity support programs that most critics of the farm program think are still in place.

In other words, the farm support program is working as intended; payments won’t be made as long as prices remain above target levels. But the target prices in the program remain as a safety net should global or self-inflicted events topple the economy and drag down farm prices with it.

Part of the reason why farm prices are currently well above target prices is that greater demand for corn has come from the biofuels industry. In Minnesota and several other states, farmers have been lead investors and developers of plants that create ethanol markets for corn and related soy-based diesel.

Congress is ending a tax credit program for ethanol, and Peterson noted that these credits were set to expire anyway. For many Americans, the ethanol program is wrapped up in what is considered the farm program although they are separate. What isn’t generally appreciated is how the farm program and the ethanol program have worked together in building rural economic infrastructure, the veteran congressman said.

“A lot of people don’t like ethanol, including some of our friends in animal agriculture,” Peterson said, because demand for corn at the plants raised prices for feed. Regardless, what the plants have done is strengthen local economies and created jobs, and kept energy profits at home that would otherwise go to multinational oil companies and foreign producers.

Thus, an infrastructure is in place for locally developed alternative fuels for when new technologies open the way for replacing corn-based ethanol. “We’re a long way from when that can happen. But we do have the infrastructure in place … if we don’t shut it down,” Peterson said.

Tomorrow, part-two of this series examines global influences and green technology on the Midwest ag economy.