Among the accomplishments of the 2013 legislature is a reformed city Local Government Aid (LGA) formula that distributes property tax relief to communities across the state. The new formula more effectively targets aid to cities with the greatest need for state assistance and represents the most significant reform to the LGA program in twenty years. These reforms were accompanied by a significant increase in LGA funding.

LGA was established during the 1971 session (first distributed in 1972) in an attempt to consolidate “a variety of programs” in a way “intended to make the state aids system more cognizant of differences in ‘need’ [for state assistance] among local governments.”* Since 1972, funding for city LGA has fluctuated. In nominal dollars (i.e., unadjusted for inflation), LGA funding peaked in 2002 at $565 million. Since that time, annual funding for LGA has taken a nose dive, ultimately bottoming out at approximately $426 million during the years 2010 through 2013—a decline of about $139 million (25 percent) from the 2002 peak.

To get a true apples-to-apples comparison of the growth in city LGA funding over time, it is necessary to adjust for erosion in the purchasing power of the dollar due to inflation and for growth in Minnesota’s city population. In constant 2014 dollars per capita, city LGA peaked in 1989 at $241, while total city aid (including LGA, disparity reduction aid, equalization aid, and homestead & agricultural credit aid) peaked in 1990 at $300 per capita; throughout the remainder of the 1990s until 2002, total city aid hovered around $250 per capita.

Since 2002, real per capita city LGA took a sharp nose dive; the largest single year decline occurred in 2003, followed by a slow but steady erosion over the next ten years. By 2013, total city aid (with the elimination of the Homestead Market Value Credit during the 2011 special legislative session, LGA was the only form of direct aid to cities remaining by 2013), had plunged to $99 per capita in constant 2014 dollars—less than half of what it was in 2002 and less than a third of what it was during the 1990 peak. The graph below shows LGA in constant 2014 dollars per capita since the inception of the program in 1972. For comparability purposes, several other city aid and credit programs—some of which were combined into LGA—are also shown (green portion of the bars from 1989 to 2011). 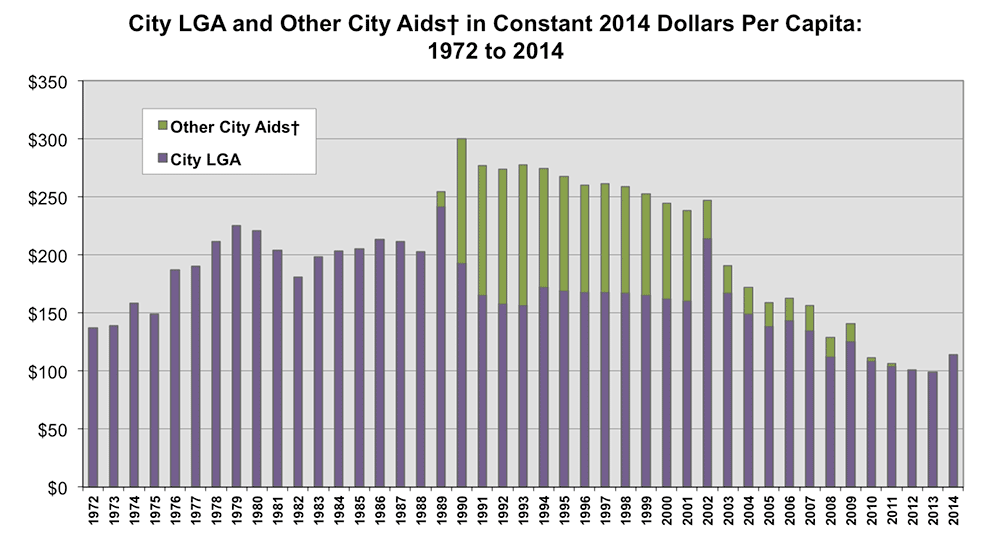 These LGA cuts translated not only into higher property taxes, but cuts in funding for public safety, libraries, parks, and city infrastructure. To help reverse these trends, Governor Dayton recommended an $80 million increase in the annual LGA appropriation beginning in 2014. This $80 million was sufficient to restore over half of the nominal cut and about one-sixth of the real per capita cut since 2002; furthermore, even after the proposed increase, real per capita city LGA in 2014 is still 17 percent less than it was at the inception of the program in 1972.

Nonetheless, the major city organizations in the state welcomed the proposed LGA funding increase enthusiastically. The Governor’s proposed $80 million increase represented a 19 percent increase in the base funding level for LGA in a year when the state was confronting yet another budget deficit and many other worthy public functions and programs were petitioning for a badly needed funding increase. Under the circumstances, cities were rightfully pleased that the Governor made some room for LGA in his proposed budget.

Why did Governor Dayton propose an LGA funding increase? First, as a result of cuts to city aids since 2002, funding for city services had fallen significantly. According to city finance information from the Office of the State Auditor, inflation-adjusted city revenues declined by 16 percent from 2002 to 2011, while city expenditures declined by 5 percent. After factoring in the eight percent growth in city population over this period, real per capita city revenue and spending each declined by double-digits. Total city revenue estimates compiled by Minnesota Management & Budget indicate that the real per capita decline in city revenues will continue into 2013. An increase in city LGA would help to reverse this deterioration in city finances, which was contributing to a steady disinvestment in public infrastructure and services and an ongoing diminution of the quality of life in Minnesota cities.

Second, the erosion of LGA funding contributed to rapid growth in city property taxes. From 2002 to 2013, the sharp decline in LGA coincided with a significant increase in real per capita city property taxes, as illustrated in the graph below. (The real per capita city property tax increase illustrated below is less than the state aid loss because a portion of the aid loss was dealt with through expenditure reductions and other city budget adjustments.) Property taxes are regressive, meaning that a disproportionate share of Minnesota property taxes are borne by low- and middle-income households. Given the Governor’s pledge to reduce the regressivity of Minnesota’s tax system, it is logical that he would seek to reduce property taxes through a partial restoration of funding for LGA. 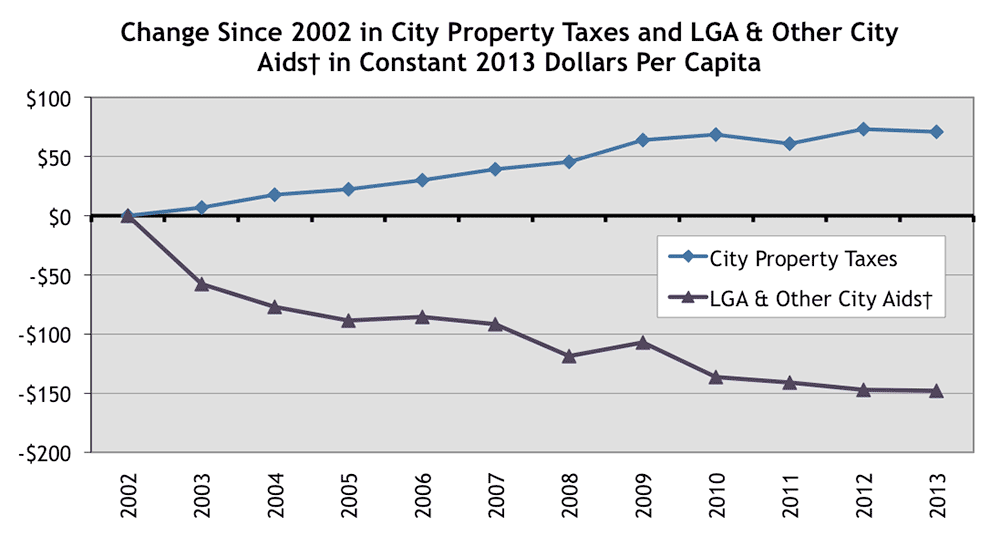 The $80 million LGA appropriation increase that Governor Dayton recommended in his budget was ultimately adopted by the legislature and enacted into state law, but not before significant reforms were incorporated into the Local Government Aid program. The process by which these reforms were crafted is described in the next installment in this series.

*This is according to a 1985 House Research brief, “State Revenue Sharing with Local Governments: The Local Government Aids Program.” In the first year of the Local Government Aid program, the state distributed LGA to cities, towns, counties, and special taxing districts. Over time, towns, counties, and special taxing districts were taken out of the LGA program (although these jurisdictions did receive other forms of state assistance). Since 2002, LGA has been distributed exclusively to cities. This analysis will focus only on the portion of LGA distributed to Minnesota cities.