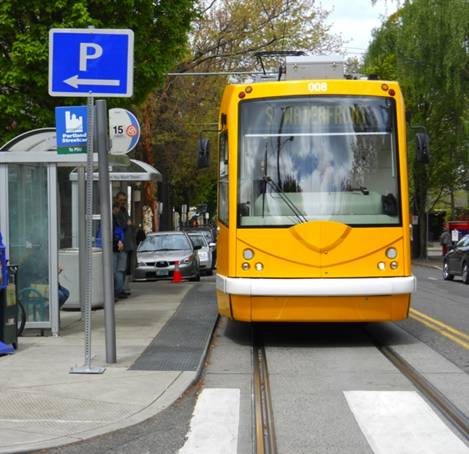 In the early 20th century, there were over 500 miles of streetcar tracks in the Twin Cities. Few physical artifacts remain in Saint Paul from that time, but buses still run on many of those historic routes, and many of the city’s most robust commercial corridors are located where streetcars once ran. Like many cities across the country, the Saint Paul streetcar lines were largely dismantled in the 1950s. However, now at the start of the 21st century, streetcar lines are once again being studied and constructed by cities across the country, for both their transportation and economic development benefits.

Open Saint Paul is an online forum for civic engagement. Read what others are saying about important Saint Paul topics, then post your own statement. City staff and officials will read the statements and incorporate them into their decision-making process. Click here for more information on Open Saint Paul. 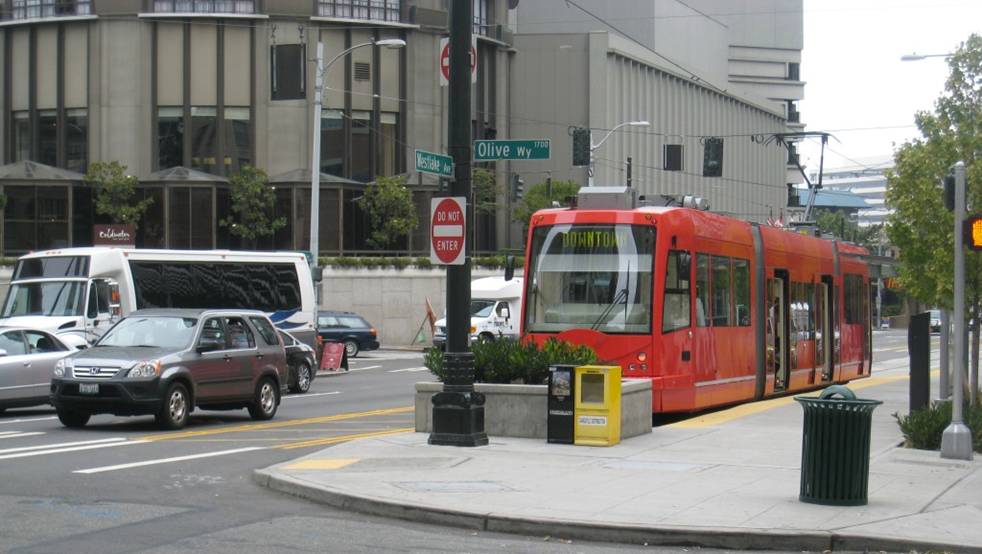 The City of Saint Paul is in the middle of its Citywide Streetcar Feasibility Study, the first step in determining how streetcars could potentially be integrated into the city’s transit system, and what benefits different lines might bring to our neighborhoods.

Modern streetcar systems use rail vehicles that share the streets with buses, cars, trucks, and all other users. They make local stops, every 2-3 blocks, and focus on local trips within a corridor rather than on longer commuting trips. They have the potential to provide connections into downtown from a local shopping district, or to bring people to the Green Line on University Avenue. Streetcar lines can also help stimulate development and focus higher densities of housing, offices and retail uses along a corridor.

What do you think about bringing streetcars back to Saint Paul? Would you like to see them in your neighborhood? Why or why not?

From Catherine Malave inside Ward 3:

Yes, a streetcar would be perfect for West 7th street to connect downtown and the Highland Village, also the new development in the old Ford Plant site. Another route would be Snelling Ave. or Randolph Ave. where traffic gets congested and air quality suffers from exhaust accumulation. This would also be a great connector to the lightrail stations in Mpls and in Central Corridor. It seems best to have this for urban boomers (future senior citizens).

From Margaret Owen Thorpe inside Ward 1

As Arlo Guthrie sang, “…and the sons of Pullman porters and the sons of engineers ride their fathers’ magic carpets made of steel…” Very romantic, especially to the daughter of a long-time motorman on the Pacific Electric Railway. I have a photograph of a Pacific Electric car – destination “Hollywood” – hanging in my entryway. The “little red cars” were cool. They ran on streets and on railroad right-of-ways. They were, by far, the best way to get to downtown Los Angeles in 1950.

I also have a picture, in the upstairs hallway, of my grandfather wearing a duster and showing off a six-horse surrey with the fringe on top as the latest and finest in Santa Barbara transportation circa 1899. I love both pictures. They are romantic.

And it would be the silliest and most foolish waste of taxpayer dollars that this daughter of an engineer and motorman can think of – short of a 40-foot tall bronze statue of Pigs Eye Parrant – to resurrect and replicate either of these forms of transportation – streetcars or surreys – in Saint Paul.

Sometimes, new stuff is new because it works better than old stuff. It is not 1950 any more. Nor is it 1899. The basic problem with streetcars is that they cannot adapt to changing communities. They are where they are because that’s where the tracks run. And despite the pipe dreams of the LRT club, communities do not adapt to tracks any more than trees grow where there is no soil. Buses, as unromantic, noisy, and polluting as they may be, can go anywhere the community needs them to go – and stop going where it doesn’t need them.

I loved the “little red cars”. In 1950, I also loved climbing apricot and avocado trees. Alas, they don’t belong in Saint Paul in 2013, either, and I – one of those “urban boomers” that you imagine wanting streetcars doesn’t. If you crave the past, we’ve got the State Historical Society.

From Marlene Hockbein inside Ward 6:

Back in the early 50’s when the street cars were replaced with buses, the streets were paved to cover the streetcar tracks and the electric wires were removed.
The streetcars ran in the middle of the street and passengers got on and off by walking into the street. Now, traffic is way too congested for that. Look at how many accidents there are with light rail.
How is this supposed to be paid for? We don’t even have convenient bus routes in most neighborhoods, because of the cost. Anyone who envisions going back to streetcars had better wait and take a look at how light rail ridership progresses before adding, yet another, mode of public transportation that won’t meet the needs of those who would use it.

From Matt Dahl inside Ward 5:

It was a crime when Firestone and other tire companies lobbied to exchange streetcars for buses. Here’s what I know: I absolutely love visiting modern cities like Amsterdam, Paris and New York with a healthy rail transit system. We have a lot of good schools, shopping, and higher arts here but visitors don’t want to cab from one city to its twin for $30 when in other cities they can jump on a train for $2. And if you want to talk about effect on locals, I too would rather rail across the city than take a taxi or meandering bus. I vote yes to streetcars.

From Patrick R inside Ward 6:

I believe streetcars are an excellent idea for Saint Paul. One only has to look at history to know that the city had a robust system throughout. Bring them back as soon as possible.

There has been talk about a Snelling line and a 7th Street line, but my vote is for starting on the East Side of Saint Paul. I for one believe transit options like streetcars and lrt create huge opporutnities for economic development. I know there are those that would argue against me, but just look at the development along the the existing line and the future Green line. Look across the country where lrt and streetcars have been reinstalled and measure the economic growth along those corridors. And when the Green line is operational the pace of development along that corridor will be far greater than anywhere else.

So, let’s start where the need is greatest and not necessarily where money talks most. Since development follows these new lines, there is no greater need for economic development than on the East Side, such as Arcade, Payne and East 7th Street. More people rely on transit in this area of the city than anywhere else. Prove the naysayers wrong and start there. Don’t take the easy route, begin by connecting the East Side of Saint Paul with the rest of the City in a healthy manner. I would challenge the city leaders and planners to look at starting on that side of town first and not last. If streetcar lines are so great, and I believe they can be, buck tradition and ridership studies. Because when it works there the other lines will be installed faster than you can blink your eyes. If it happens the other way around it will be years before anything remotely resembling a streetcar line gets installed on the eastern side of the city, other than a fast commute and few stops, between downtown and the eastern suburbs.

From Ron Okenfuss inside Ward 5:

I think it would be great to see streetcars in Saint Paul especially if they would feed the light rail line, and link the city’s colleges, universities, and even high schools with downtown and MSP airport for example. Run them close to schools and we might even be able to get rid of school busses. A Lexington line, West 7th, Snelling line and even revive the old Como – Harriet line linking parks would be great additions to our neighborhood – especially if you could replace the busses with them. I used to live in Zurich, Switzerland which is a similar size to St. Paul and their street car system was a great complement to cars, busses and trains.

Streetcars with easy bike storage would be great.

Costs for streetcars always concern people – it would be good to have a fair comparison though – I wonder how comparable trips by car, bus and streetcar would look if cars and busses had to add in the street maintenance and highway construction costs plus auto depreciation. Taxpayers already subsidize cars by building and maintaining streets and highways – I dont see streetcars as being any different.

From Eric Saathoff inside Ward 6:

It’s unclear to me exactly what the goal of this would be.

I don’t like the buses, but it has nothing to do with how comfortable they are – it has absolutely to do with how hard it is for me to get somewhere in a decent amount of time.

If these are looked at as a cost-saving mechanism, we need to see the numbers in a real example from another city.

If these are looked at as an economic booster for neighborhoods, again we need to see the real numbers from real examples.

I think they would be beautiful and I would love to have one instead of a bus. I don’t mind the construction, etc.

However, my main gripe with riding public transit is that it is too slow to get anywhere but downtown. I can drive to work in 12 minutes or take a bus for 45m – 1 hour.

I also agree with another poster that the East side needs this development perhaps more than the rest.

From Erik Hare inside Ward 2:

There are trade-offs to consider, and as much as I’d love to see a streetcar on West 7th it may not prove to be a good idea. Here are the issues I see:
1) Does it actually fit? A wide street like Snelling (about 100′ most of the way) definitely has room, but West 7th (80′ in spots) may not work as well. Conflicts with parked cars, etc, might make it very hard to squeeze in.
2) Does it make economic sense? Charlotte NC published how they calculate this a while ago, and what it comes down to is there is a higher fixed cost to install a streetcar but a much lower operating cost per passenger. You can take into account higher ridership that is typically seen, but that’s a bit fudgy.
3) Does it connect? A streetcar line by itself might take people to where they want to go, but it’s all in how it connects to the rest of the system that makes all the difference – because the system should be able to take anyone anywhere. For example, if we also have a faster LRT line on Shepard Road a West 7th Streetcar has to connect somehow to make it really useful (and ultimately faster!).
These are the immediate concerns. A lot can be gained simply by upgrading the stops for buses and using more modern buses equipped with low floors, traffic light changing, etc. Making the leap to Streetcars may make sense or it may not, and I’m willing to see how the study goes. But in my heart I would love to see them on West 7th!