When you walk into an “ethnic” restaurant — that is, a restaurant run by people whose forebears got here after yours did — you often see religious items that you assume must be meaningful, even if you’re not exactly sure what they are. Religious iconography isn’t so popular in American-style restaurants, unless you consider the amalgam of capitalism and democracy a religion, as well you might, in which case the Perkins mega-flag beats out all other religious restaurant decor, at least size-wise.

At On’s Thai Kitchen, there’s a big shrine in the corner of the dining room, smack in the middle of the tables. You can tell that the many items on it aren’t there to gather dust. Even if you’re a total pagan, you’ll recognize the Buddha statues. But this shrine is so striking in its beauty and its prominence in the restaurant that I had to ask: why does proprietor On Khumchaya, while running a busy restaurant that’s open all day, every day, take the time to maintain this pretty pile of stuff? 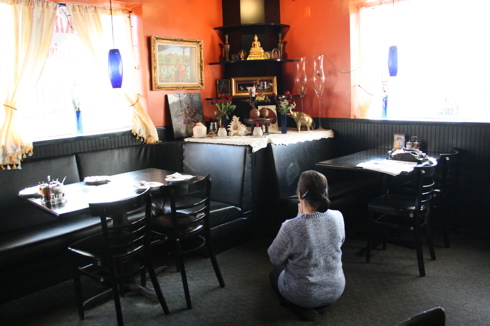 “I pray here every morning before the restaurant opens,” says On, with the interpretation help of Chonthi, one of her three daughters. On speaks English, but she was anxious about conveying her meaning about something as important as her Buddhist traditions. “I light three sticks of incense and I ask the Buddha for peace. I ask him to help me put my heart and soul into my cooking. And I ask him to bring customers even though there’s a huge construction project in front of the restaurant.” 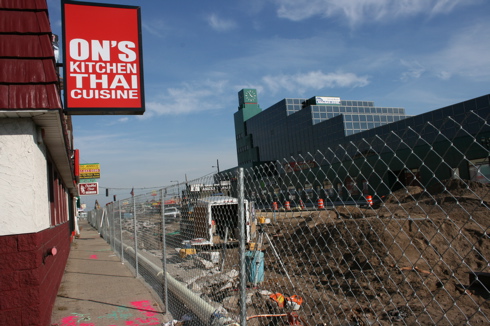 (The Central Corridor construction has disrupted traffic on University for now, but it’s still easy to get to On’s: just turn on Fry Street, where Ax-Man is, and turn into the alley behind Ax-Man. There’s a parking lot for On’s right behind the restaurant.) 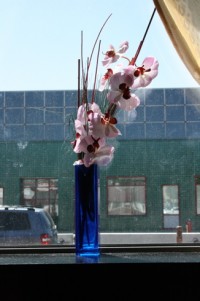 Buddhism has been essential to On all her life. Her childhood was no picnic. Her parents divorced when she was eight, and they basically left her to care for her four younger siblings with no money. She struggled to find ways to make a living, scrubbing floors and doing the oddest of odd jobs. To earn a baht (a few cents), she would pick the gray hairs out of the heads of her aging, and vain, neighbors. When they didn’t have any gray hairs, she pulled some whiskers out of a cat and tried to pass them off as her customers’ hair, so they’d still give her a baht. (This story took a while to get across, both linguistically and cross-culturally. When I finally got what they were telling me, I must have looked stricken at On’s desperate plight, because On and Chonthi apologized profusely for making me sad, and then we all shed some tears, and then I apologized for making them sad, and then we moved on.)

On’s introduction to food service, broadly speaking, was when she would try to earn money from farmers by foraging for weeds to feed the pigs. Eventually she gathered vegetables and sold them in the markets. When she got married, she moved to Bangkok from southern Thailand and opened a little take-out place in the flea market. “It would take all day and all night to tell you my life story,” says On. “Such a sad, long story. But in 1991 I came to the United States. My mother had remarried, to an American, and she brought me here.” 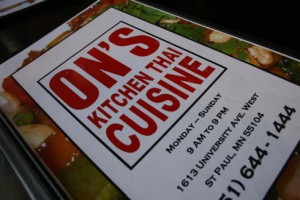 On (whose full name is Amnuai Khumchaya) worked for sixteen years as a cook at the Northstar Hotel in Minneapolis. She wanted to learn American cooking, and that’s where she learned English as well. “Sometimes my boss would tell me to go into the cooler and get something, and I didn’t know what she said, so I would just stand in the cooler, hoping I would figure it out,” she says. She still struggles with English, especially that ‘L’ vs. ‘R’ distinction that curses all English language learners. “When I say, I want to eat rice, my American friend points at the ceiling and says, why do you want to eat light? I can’t hear the difference!” She laughs at this now, but it’s still tricky. 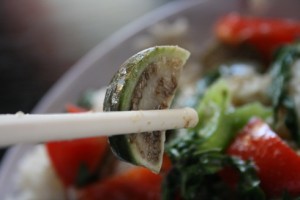 She bought the former Cafe BonXai on the first of December and opened the next day, to rave reviews. “I didn’t want to work for other people anymore,” she said of her somewhat impulsive decision. “And my daughters were grown up, old enough to help me.” All three daughters, and their husbands and children, have pitched in to make it happen. 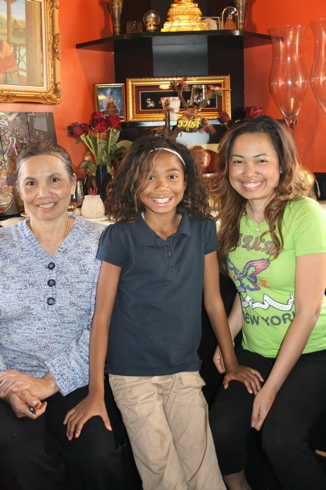 On starts work every morning at 7 and often doesn’t get home till after 10:30 pm, which doesn’t leave her much time to pray at her temple in Elk River; hence the conveniently located restaurant shrine. “Some people hide their religion, but I like to show people my beliefs,” she says. “It’s good for me, and it’s good for the customers, too.” Here, then, is an introduction to On’s objects, so when you go there, you can eye them with even more respect. 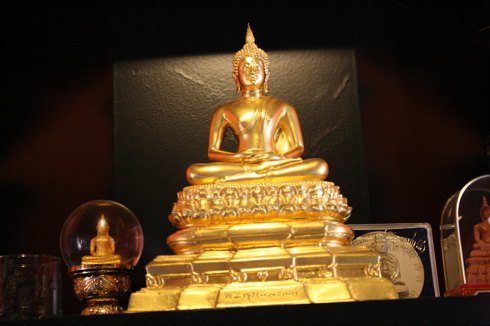 The monks at the Thai temple gave On this Buddha for good luck when she opened her restaurant. It was also to thank her for bringing them food, which she does regularly as a sort of tithe. She’s collected the other little Buddhas from various places: “The more Buddhas you have, the more peace you have,” she says. 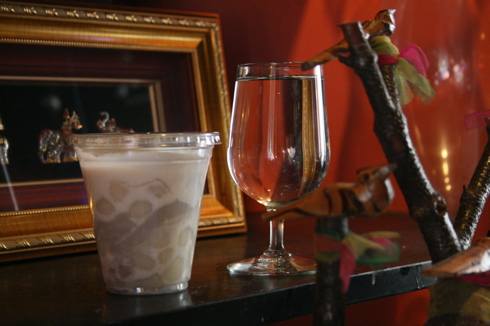 On puts out two glasses of water each day — one on each side of the Buddha, for balance — and a serving of food, like this lychee nut dessert. After some consultation on how to explain the reason for this, Chonthi and On settled on the following: the Buddha uses the food he needs, spiritually, and then distributes the rest to others who are in spiritual need. It’s both a kind of spiritual charity and a way for On to communicate with the spirits of family members who have passed on. 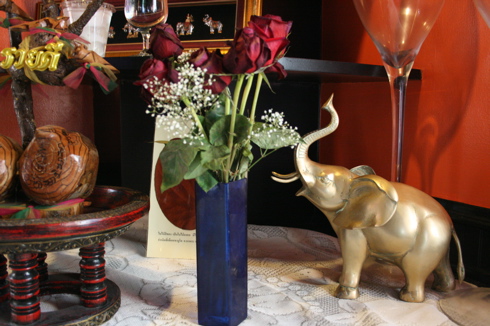 Fresh flowers make the shrine more beautiful; Buddhas, like people, appreciate that. Elephants are a traditional Thai decoration and bring good luck. The wood statue on the left (the round things are birds) was a gift from a friend when she opened the restaurant, and the phrase in gold letters says something to the effect of, “may you get rich quick.” 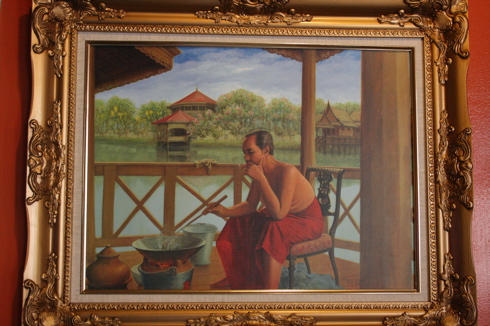 On likes this picture of the fifth king of Thailand because it shows him cooking, and he was reputed to be a skilled cook as well as an all-around good guy. She prays to him to help her with her cooking. He’s a role model for her in other ways, too: he brought democracy to Thailand and believed in freedom of speech — just as On wants to be free and to speak freely. 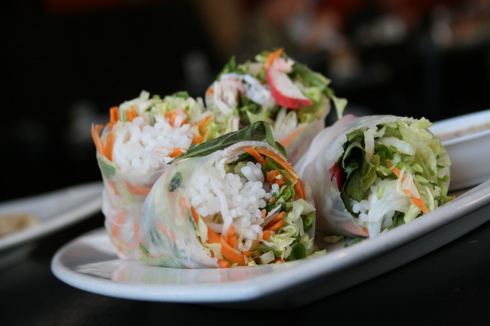 Of course, you’ll spend more of your time at On’s Thai Kitchen staring at the food than at the decor. Interestingly, though, Chonthi pointed out that when people come in and seat themselves, they tend to cluster at the tables near the shrine. “I think it makes people feel good,” says Chonthi.