Baseball supposedly is the all-American game, but today it looks more like apartheid: Whites watch a game mainly played by White players, while most of the Blacks at the ballpark are not fans but concession workers.

It’s like that at Minnesota Twins and St. Paul Saints games, and at Big Ten college baseball games as well.

At last month’s Big Ten baseball tournament, Justin Cureton and I became unintentional kindred spirits. He was the only Black player on the field for the Big Ten regular season and soon-to-become tournament champion Indiana, and this reporter was the only Black in the press box.

Both of us were, in our respective roles, the Only Ones. 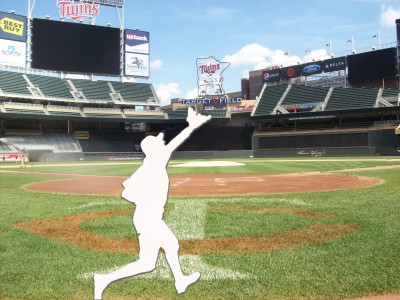 “Unfortunately, there aren’t a lot of Black players playing [Big Ten baseball],” admitted Cureton, who led the Hoosiers in runs — first also in the Big Ten and in stolen bases. “My first year in Indiana we were talented, but we didn’t do this well,” recalled the senior outfielder. “Finally, this year it feels good to actually see our hard work pay off.”

Playing center field in such a big-league ballpark as the Twins’ downtown edifice “was a lot bigger,” added the Hoosier starting centerfielder. “After a couple of innings, you get used to it.

“I don’t look at [being the only Black] — I am just another player out there playing baseball, but usually I’m the only one,” Cureton pointed out. However, he became accustomed to it, since this status was the same for him in high school in Indianapolis.

According to Richfield native Donald Blunt, the Only One on the 23-man St. Paul Saints roster, there was “never a ‘What’re you doing here?’ But more was expected of you.” We spoke after batting practice last Saturday.

“Every other professional team I’ve been on…had more than one Black guy. Growing up as a kid, I had a couple [of Black teammates] here and there. I think I was the only one in college for the four years I was there,” continued Blunt, who has played in the American Association for two seasons. “Ever since 2011, when I started playing at this level, I always had at least seven Black guys with me.”

Prior to taking my seat as the only Black [again] in the press box, I ran into Josiah Brooks of Maplewood sitting alone in the Midway Stadium stands. He was preparing to take his spot as the Only One of 17 game-day ushers.

“The six years I’ve been here, I’ve only seen five Black players on the Saints team,” Brooks noted. He pointed out that you probably can count the number of Blacks on one hand who regularly attend Saints games.

Later it took only half a hand to compute the number of Blacks I saw in attendance that night — the same hand used a couple of weeks earlier as I sat prominently in my Only One position in the Twins press box. Alone again, naturally.

When I don’t see that many people of color at Twins games, my eyes easily become fixated any time one or two are spotted. Therefore, on the last Friday in May as two Black individuals stood out among the lack of color in the stadium’s home-plate box section, I kept one eye in their direction throughout the contest hoping for a chance to ask them a question or two.

As they were leaving the game, the two Only Ones agreed to talk with me about their experience. “I got tickets from work,” said Obisha Fields, Maplewood, of her and her cousin Janece Strickland’s presence.

“I did notice that there aren’t a lot of Black people here,” observed Fields, who admitted that if she hadn’t gotten the two free tickets, most likely she would’ve been elsewhere that Friday evening. “I know that Black people do have an interest [in] baseball, but why they are not here, I’m not sure.

“I did used to come to baseball games with my grandfather when I was younger,” she recalled, adding that she wouldn’t mind attending another Twins game. “I like watching live sporting events.”

Cureton graduated this year from Indiana with a sports communications degree. Although he’s not ready to give up baseball, he said he’s prepared to pursue another field — broadcasting.

Blunt said he wants to be on a major league team roster one day. “I’ve got a long way to go, a long way to go. But I am going to do everything I can to try to get there,” he pledged.

After his college team won the conference crown, Cureton thanked me for speaking with him after each game during the four-day tournament. “I appreciate you coming,” he said gratefully.

Cureton offered advice for young Blacks near and far: “Any kid who wants to play baseball, you can do it. There’s a lot more things out there than just football and basketball.”

Next week: the Only Ones in club volleyball

Image: An Only One in the stadium outfield (Stadium photo by Onika Nicole Craven)