When the Gibbs School at Cleveland and Larpenteur avenues fell to the wrecking ball in 2008, it was regarded by many as the end of an era. There is still a country school in the area, however, although its last student left nearly 90 years ago.

Logan School, once located at Hoyt Avenue and Shrub Street (now Chatsworth), lives on as a handsome residence at 1134 W. Hoyt, north of the Como Park golf course.

The school opened in 1888, with a stove to heat the single classroom and a bell in the rooftop turret ringing the beginning and end of the school day. Hundreds of boys and girls went to school there, but attendance waned with the opening of the new Como Park Elementary School to the south and Logan closed in the early 1920s.

Except for occasional use by neighborhood groups, the old schoolhouse sat vacant for nearly 15 years, until it was sold to a contractor who moved it several blocks west in 1937.

In a newspaper story at the time, Carl W. Cummins, a prominent attorney and St. Paul civic leader, recounted how he’d taught at Logan three decades earlier while working his way through business college.

“In the one-room school, I had a group of fine children,” he told the St. Paul Dispatch. “Most of them came from small dairy or truck farms then operated in the neighborhood. I had to teach all eight grades . . . just as I would far out in the country. It kept me good and busy.”

Jan Graves and her late husband, Ed, purchased the property at 1134 W. Hoyt in 1978. They learned from a longtime resident that the few home owners in the area when the old school was moved were appalled at having a dilapidated structure plopped down in their midst.

Once it had been stuccoed and renovated, however, everyone came to terms with the new house on the block. The first owner-occupant was John S. McGrath, described in the city directory as a “justice of the peace at-large.” He was said to have officiated at marriage ceremonies in the den of his home.

The former schoolhouse held a special appeal for the Graves, both of whom came from families of educators. Jan was a music teacher with the Anoka-Hennepin School District and Ed worked with children at the St. Paul Schools’ Hancock-Hamline Learning Center. 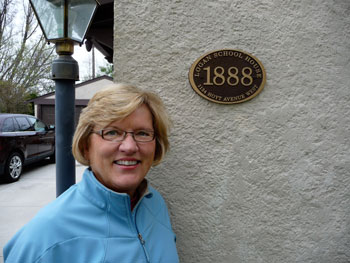 “I’ve always loved this house,” said Jan Graves, “but when we moved in it had a really tiny kitchen. Once I finally started an expansion project, I learned just how well it was built, with hand-hewn boards 21 inches wide. We also had the place re-roofed at one point and it was fun to see where the bell tower had been situated.

“For me, there’s a special connection, thinking about what all transpired within these walls,” Graves said.

Roger Bergerson writes and explores history at his home in Como Park.