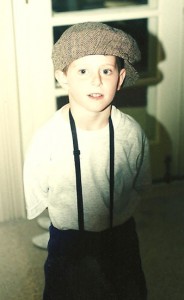 OK, I know you’re out there-a newly-minted single parent and not expecting to be. You see other Jewish families celebrating Jewish holidays and look at your child, feeling like you have only half a family to give and that half is mostly empty, like a hollowed-out log. Because observant Jewish families usually have two parents, and yours has only one.

My first Purim holiday as a single mother happened at the home of a Catholic friend who like me, was navigating an unexpected voyage on the seas of single parenthood. I brought along my three-year-old son Josh, a box of hamantaschen and four finger puppets bought at a synagogue gift shop.  I bought them because my son, like his mom before him, was a creative child, given to weaving stories with handkerchiefs, trucks and imaginary friends.

The puppets themselves were hardly masterpieces, with round button eyes that had roving dots in the center that often made them look cross eyed. Queen Esther had curly blonde hair frizzing out horizontally, which couldn’t have been remotely accurate. Her uncle Mordechai, the king and his evil vizier Haman looked so goofy I almost thought of using handkerchiefs instead, but decided against it as we’d already paid for  the puppets.

Josh had heard the Megillah scroll (Purim story) read at the synagogue where his father worked as a cantor, but I knew he hadn’t understood much, as the story is chanted in Hebrew. The story of Queen Esther, who married the Persian King Ahasuerus after he displaced his former queen Vashti, and Esther’s struggle to save the Jewish people would be lost on my four-year-old. So today was supposed to be about giving Josh and my friend’s children a more child-friendly Purim story-if I could manage it.

Last year I had been at synagogue with Josh and his dad, and before Josh was born his father and I had been with a congregation in Indiana. My favorite Purim there was one in which the rabbi dressed in a white wedding gown, intoning passages from the Purim story in falsetto, and Josh’s dad was dressed as Boy George. He and I had argued briefly over borrowing one of my favorite jackets, which had felt vaguely like an episode of M*A*S*H with a fight between Hot Lips and Klinger. But I did end up giving him the jacket, and he and the rabbi had made quite the comedy team.

This year I had no synagogue to attend and hadn’t the first idea how I was going to celebrate. I told my Catholic friend it was a Jewish holiday, but not much more. Now I stood in his kitchen listening to his three children play with my own, trying to figure out how to create a family Purim with what felt like a puppet family rather than a real one. Just a few months ago I had been part of a synagogue community with a defined trajectory and an armature of structured support; now I was on my own.

Yet  dwelling on what I didn’t have only seemed to make things worse. So I did what I always do when I’m in trouble. Tell a story.

I called out to my son. “Ready to share some of this hamantaschen?” Four pairs of feet scurried into the kitchen, and as I handed out the pastries, I started talking. “Once upon a time, there was a stupid king.” I started that way because it was exactly what I heard my teacher say when I was in Hebrew day school-and always thought it was a great way to begin.

“This king did whatever his advisers told him, and they wanted his wife Vashti to dance for him. She refused so they banished her.”

“How did that make the kind stupid?” my friend’s daughter Alison asked.

“He listened to his advisers without thinking about the consequences,” I said. “Because the king became very lonely without his wife and realized he would need another. ” I pick up the finger puppets to continue the story. “So he called for all the women in his kingdom to come to a gathering where he could choose a new wife. No one in the Jewish community wanted to go, because one of the king’s advisors was a very evil man named Haman who wanted to kill the Jews. “

“He wanted people to bow down to him and Jewish people would only bow when they were praying to God. So Haman made it very hard for the Jews, plotting to make war on them. But a man named Mordechai convinced his niece to attend the gathering, in hopes she might marry and gain the ear of the king.”

The children’s eyes are wide, intent, and fixed on the puppets. I explain how Esther tried to blend into the crowd, how the king was taken with her and selected her out of all the others; and how she grew close to him and eventually saved her people by telling him of Haman’s plans.

I explain how hamantaschen are meant to symbolize Haman’s hat and how we eat them as a symbol of victory. And by the time I finish telling the story I realize I don’t need a synagogue, a congregation or even a husband to give my son a piece of his heritage. Which is, in itself, a kind of victory, especially when you are a single mother venturing out into territory you never wanted to explore.

I say this because-again, I know you’re out there, and maybe this parenting business is new to you too and the thought of doing it alone is enough to send you screaming into the night.  So I wanted to share what Purim taught me that year; that the ancient Jewish stories aren’t just for rabbis and cantors and married couples and traditional families. They are also your children’s-and yours.