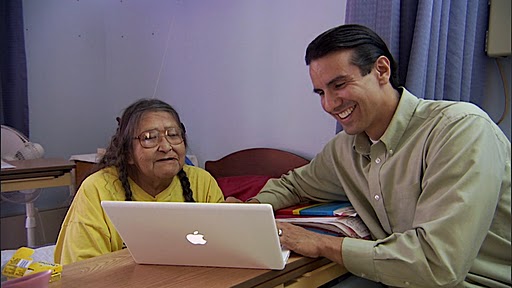 It was a wild and windy evening, but a crowd of about 60 people turned out for a preview of a documentary about the rescue and revitalization of the Ojibwe language at the Anishinaabe School in Minneapolis on October 26. Many of those in attendance were members of the Ojibwe community who are active in local language education programs. The film is a production of Twin Cities Public Television and will have its debut on November 1 at 8 p.m. on TPT 2.

“Anton gemaa Tony Treuer indizhinikaaz zhaaganaashiiwinikaazoyaan igo gaye.” A slender young man, wearing a bright blue shirt and a neat braid down his back, introduced himself in the Ojibwe language. The crowd sat in fascinated silence as he spoke in fluent, easy tones. Although many in the audience could not understand, he must have finished with a humorous remark, as a few of the older folks in the crowd chuckled when he finished.

Dr. Anton Treuer, a professor of Ojibwe at Bemidji State University, switched to English to introduce himself again. He is featured prominently in the film, both for his personal story and his work with Ojibwe elders.

Ojibwe is a second language for Treuer, one he studied and learned as an adult. Now his work is dedicated to interviewing the last remaining “first speakers,” those for whom Ojibwe is their first language, the language they grew up speaking before they learned English. It is estimated that most of these “functional speakers” are older than age 70, and that there are fewer than a thousand speakers of the Ojibwe language remaining in the United States.

The Ojibwe language is one of the world’s imperiled languages. According to program notes for the film, a language is lost every fourteen days. One of the main reasons the Ojibwe language and many other indigenous languages throughout North America have nearly disappeared is rooted in early U.S. policy of assimilating American Indians. At residential schools, whole generations of children were forbidden to speak in any language other than English. The damage to language, culture and family life has been profound.

“We all wonder,” said Treuer, “How do we help Indian kids get a leg up in this world?” He believes that when children study their own language and culture, they perform better academically. He pointed to Ojibwe language immersion schools in Minnesota and Wisconsin, such as Waadookodaading, an charter elementary school in Hayward, where the students study all but one hour of the day in Ojibwe and yet pass tests in English at rates higher than their native peers attending public and tribal schools.

The film follows Treuer, and others like him, who are driving the Ojibwe language resurgence. Many of them studied the language at the University of Minnesota, Bemidji State University, and with tribal elders throughout Minnesota, Wisconsin, and Ontario. They are now working hard to establish language immersion charter schools such as the Niigaane Program at the Bug-O-Nay-Ge-Shig School in Leech Lake and the Ojibwe Language Immersion program for pre-kindergarten at Anishinabe Academy in Minneapolis.

A key component of these school programs is the presence of “first speakers,” Ojibwe-speaking elders in the classroom. They are modeling and mentoring a new generation of first speakers, children for whom Ojibwe is a primary language. With it comes a connection to a long history of Ojibwe culture and a worldview that will help them build a good future.

According to John Whitehead, the film’s producer, “This is a generational story that starts with a generation of educators with incredible commitment who taught themselves the language-people like Treuer and Keller Paap-and who went out and learned about language immersion education. They connected with the elders, so key to the future of the language, and brought them together with the children. In the process, they are healing their community. These folks are the heroes.”

First Speakers: Restoring the Ojibwe Language will premiere on November 1, 2010 at 8 PM on TPT-2. The film will be downloadable from the TPT website after it airs. Program information available here.