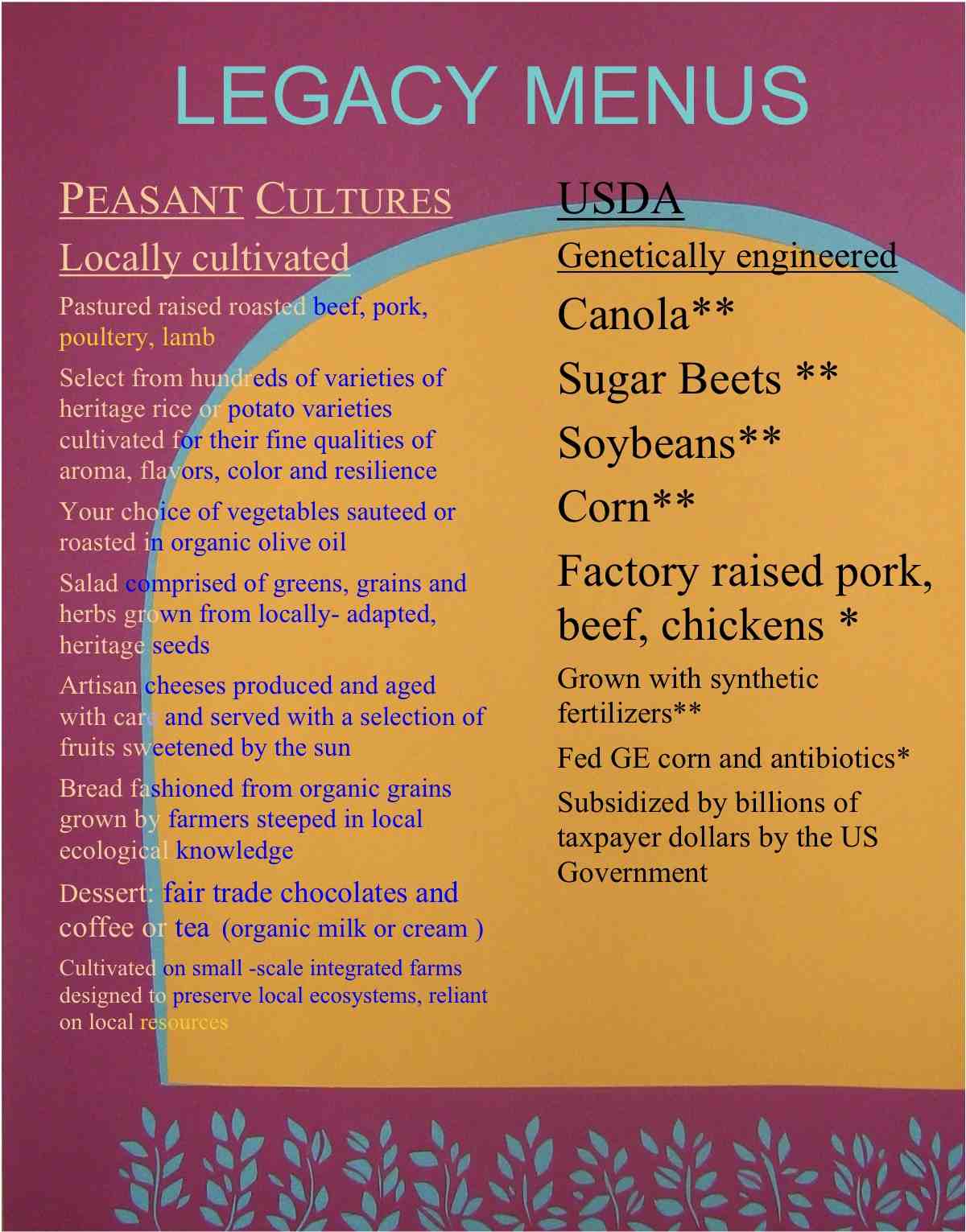 Millions of dollars have been spent by campaigns arguing that foods containing genetically modified products should be labeled. Mandatory labeling would provide information for the public to make informed choices about their purchases. Informed choice is essential.

However, labeling is not enough. The market is so profoundly weighted to ensure the success of GM, that consumer choice is insufficient to counter that advantage.

The problem is far more fundamental than lack of labeling: it needs to be addressed at the source.

States can require labels, but the USDA continues to provide the foundational support for the marketing of GM products here and abroad. With billions in tax dollar subsidies, GM crops are provided with a profitable advantage in trade deals. Millions of dollars in advertising money masquerading as ‘research’ promote GM seeds and crops.

The food economy organized by the USDA broadly and comprehensively promotes industrial- scale production of GM products to great effect. The success of the industry began with a very clever decision: the USDA provided GM crops with an economically vital position by rewriting the definition of the concept of ‘natural’.

With no process or evidence to verify the claim, the USDA declared that genetically engineered plants are the equivalent of plants that evolve in nature.

That bears repeating: the USDA defines genetically engineered plants as the equivalent of plants that evolve in nature.

The department charged with defining policy and funding for agriculture does not distinguish between plants created in a laboratory process in which genes from one species are inserted into another species from plants that evolve within nature’s ecosystems.

This simple, extraordinary claim by the United States Department of Agriculture provides pre-emptive approval for plants and seeds generated by the biotech industry. This claim remains the foundation for a multi-billion dollar industry with local impacts on a global scale.

Consumers beware: under the current definition, food items containing genetically modified products can be labeled as ‘natural’ or ‘all natural’.

Labeling GM products would provide the public with vital information. But it would not address the fundamental problem of the actions of the USDA and the false claim that underpins the success of the industry.

The definition paired with federal policies and investment of taxpayer resources (money), the USDA provides the producers of GM products with the tools necessary to drive the world’s food economy.

Under the guise of ‘development’, the power and success of GM products is making serious inroads in countries where leaders who are tempted by the promise of a piece of the profits, sacrifice land, forests and water to growing surplus crops of GM canola, soybeans or corn. This approach to agriculture generates money in a way that small- scale agriculture devoted to growing food has never done. But at a cost to local ecosystems, seed diversity and to the communities who grow food.

As the policies and investments of the USDA promote the expansion of large- scale production of GM crops, in landscapes across the globe, communities that have historically cultivated food are losing access to land. These are the same agricultural communities and pastoralists responsible for generating a wealth of diverse sources of food and seed.

The introduction of genetically engineered seeds endangers the genetic wealth and the livelihoods of the farming communities that have cultivated a legacy of agricultural diversity for millennia. For these communities, their seeds represent centuries of careful cultivation and selection. For small -scale farmers, farm -saved seeds are the promise of the next harvest.

For thousands of years, peasant farming cultures have replanted seeds that they have adapted to local agronomic conditions. This practice has resulted in producing higher and more reliable yields and tremendous genetic diversity.

Since 1960, peasant farmers have contributed 1.9 million plant varieties to the world’s gene banks. Conversely, of the 72,500 patented commercial plant varieties in the market today, over half of them are ornamentals. In other words, they are not edible.

The practices of small scale farming also mitigate the impacts of greenhouse gases while protecting the vitality of ecosystems. Grazing animals on marginalized lands in limited numbers reduces the impact of land use and manure deposits provide natural fertilizer for soil enhancement.

The extraordinary legacy of agricultural diversity and the local ecological knowledge generated by peasants faces a lethal challenge from the combined forces of the biotech industry and the USDA’s leadership.

Under that leadership, ‘free’ trade agreements written to provide markets favorable for subsidized, surplus production and force small-scale farming communities out of business.

And it all begins with a convenient and clever redefinition of the word ‘natural’.