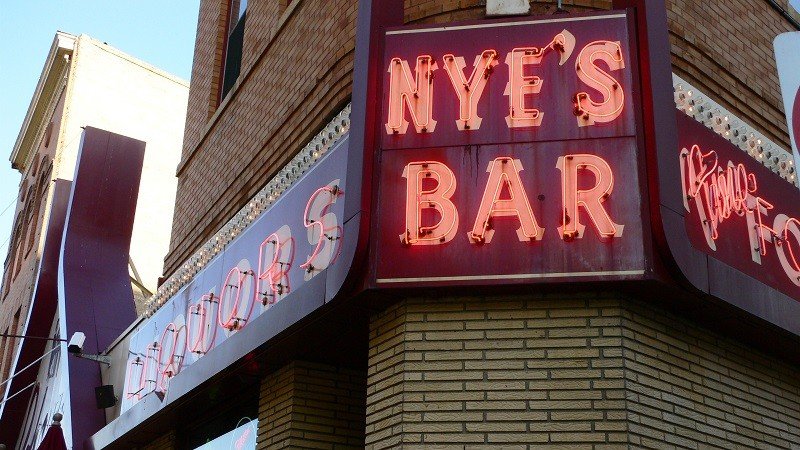 Nye’s is a special place where hipsters and AARP members rub shoulders. Where families come for plates of pirogues and cabbage rolls, and people gather around the piano bar to confidently sing old classics while nursing glasses of Polish beer, schilowitz and large Polish martinis – a pickled mushroom instead of an olive.

When the news first broke last week in the Minneapolis/St. Paul Business Journal, the reaction across the City was as if they’d announced the dynamiting of Minnehaha Falls. Nye’s Polonaise Room, in business since 1950, would be shutting its doors next summer.

In its place, developers are talking of a new high rise apartment, part of the New Urbanism, a social theory that may do to Nordeast Minneapolis what Urban Renewal did for the Warehouse District. It appears as if what little past Minneapolis still has, it seeks to destroy.

Rob and Tony Jacob, the owners since 1999, broke the news to the staff, some who’d worked there for decades. Staff was notified months in advance so they could plan accordingly. It’s a union restaurant, after all. Business had dropped off during the last few years, said Rob Jacob. The restaurant was losing money, the building was old. They just couldn’t afford to run it anymore.

Nye’s Part One, the Chopin Dining Room, is a cocktail lounge and Polish restaurant. You can still sit at the famous piano bar where “Sweet” Lou Snider played for 45 years, from 1966 until 2011, when at age 76 she retired. It was time, she said.

“It never seemed like work,” Snider said. “I went in, did my thing and went home.”

She got to know a lot of the regulars including a friend, an 87-year-old former high school principal named Dwayne, who still frequents Nye’s. Sometimes, Snider said, you’d get a new person or someone from out of town. “You knew two notes in if they were excellent singers,” she said. “Luckily, the majority were good.”

Sweet Lou’s daughter, Luanne Owlbird, remembers going to Nye’s as a child, having burgers, onion rings and a kiddy cocktail while she sat at the piano bar and listened to her mother play.

“The same table we sat at is still there,” Owlbird said. “Everything looks the same. There is nowhere else on earth like Nye’s. It breaks my heart that it’s shutting down.”

Hostess Evie Radke, age 85, retired only three weeks ago, after 36 years on the job. Her eyes and ears aren’t as strong as they were when she first started, she said. Radke set the tone of the restaurant, sitting on a bar stool at her booth near the front door.

When she came to Nye’s she’d already worked for 27 years at Harry’s restaurant, downtown. “I enjoyed the music and the piano bar,” Radke said. “I already miss the customers, but I’m planning on going to Arizona, out of the ice and snow.”

Nye’s is the type of place where the wait staff doesn’t take nonsense said regular patron Trixi Hunt. She remembers a night where her and a dozen of her friends spent the night there singing and drinking a little too much, she said, before their waitress made them move because her shift was over and she wanted to go home.

“Our veteran waitress with the blue rinse and heavy Polish accent approached our table of 15 diners,” Hunt said. “’You all move over there now,’ [the waitress] said, pointing at a table across the room. ‘I’m done here. You move. It’s time for me to go home.’”

While Nye’s Chopin Room is pure mid-century, Nye’s Part Two, also known as the Old Side, is a last reminder of the old Nordeast, once home to Poles and Italians. You can enter from the outside, under the neon ‘Liquors’ sign or walk through the swinging door inside between the Old Side and the Chopin Room. The Old Side is dark, the way bars used to be. There, starting at 8 p.m., Fridays and Saturdays, you could dance to accordionist Ruth Adams’s and World’s Most Dangerous Polka Band, dodging others on the tiny dance floor. Ruth played Nye’s from 1974 until 2011, averaging 65 songs a night, 16 songs an hour. She died in 2011. The band has a new accordionist now, a young woman named Krista Ehrenberg.

“We will be playing at Nye’s until the last date,” said Hayden, the band’s leader and trumpet player. “After the closing we hope to go on to a new home, but until they lock the doors, we remain loyal to Nye’s and to Rob and Tony Jacob.”

“Well, in short, I loved it there,” said Jones. “I spent three full days, open till close, inside Nye’s. By the end of each shift I could barely see. I loved the atmosphere, of course, and the people—the staff and the customers—but I liked the feeling of the place most of all. It’s one of the few bars I can remember in which you could take a secret picture of the scene and every last person would be smiling. There was no posing there or anger or machismo. It was just a bunch of people of all ages and walks of life listening to polka and watching the Twins and getting full and drunk together.”

“I’ll confess that when I first walked in, I thought, ‘What the hell is this place?’ But I realized that so long as you gave yourself over to the nuttiness at Nye’s—so long as you shed your cynicism at the door—you pretty quickly felt as though you belonged. All the receipts had “Esquire’s Best Bar in America” or something like that printed on them, and I was happy with how proud the staff seemed about it.”

Got a memory of Nye’s you want to share? Shed your cynicism then share your memories below.