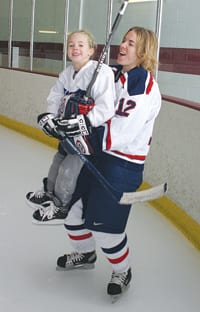 Jenny Potter and her daugter Madison.

How do you top winning an Olympic gold medal at age 19?

“Well, I guess having a kid,” said Jenny Potter, who at age 26 is a shoo-in for a spot on her third Olympic women’s hockey team. She is also the only team member who is a mom. Potter, who lives in Anoka with husband Rob and four-year-old daughter Madison, has even been nicknamed “Mom” by some of her teammates.

While most hockey moms are driving their kids to the rink, Potter, formerly Jenny Schmidgall, juggles the rigorous practice schedule of an Olympic athlete with play dates, and out-of-state training trips with bedtime stories.

“Maddy’s on the ice with me most days,” said Potter. “She has been in hockey rinks since she was born.” Her daughter was bundled up and sitting on the ice in a bouncy seat before she could walk, and Potter’s father made his granddaughter a pair of hockey skates when she was just a year old.

“Maddy doesn’t know any other way of life. She’s different than Rob and I—we’re introverts, she’s very social, so she likes being around the other players,” Potter said with obvious pride.

One of the drawbacks of being an Olympic athlete and a parent, however, is the travel schedule. Potter is away from her family for up to two weeks at a time. “It’s hard,” she admitted. “I talk to my husband on the phone, he puts Maddy on … I keep in the back of my mind, this is a once in a lifetime opportunity, and it’s only every four years that I have to be away like this.”

Thrice in a lifetime
The opportunity for Olympic glory may only occur once for some, but the 2006 games in Torino, Italy will be Potter’s third chance for gold.

Potter was Jenny Schmidgall when she won gold as a member of the near-legendary 1998 U.S. Women’s Olympic Hockey Team. She grew up in Edina, playing hockey and swimming competitively along with her two older sisters. Although she likes to swim, hockey has always been her passion. “We lived two blocks from an outdoor ice rink. The whole family would go down, play around, goof around with hockey sticks. My Dad would play hockey with the guys. When I was small, he would tell me that maybe when I was bigger I could play with them.”

He never told her she couldn’t play, she added. “He treated us like people, not like girls. He said sure you can play hockey. Being a girl was never an issue for him.”

It didn’t hurt that her mother, Terri, was kind of a tomboy, too.

Girls will be boys
Potter started playing football with boys in the fifth grade. “I liked the hitting,” she recalled, laughing.

When she tired of the hitting, in eighth grade, she started playing on the boys’ hockey team at her school. “I’d been playing in pick-up games before that,” she said. “I loved that, loved going to the park and playing.”

As she grew, so did her interest in hockey. She idolized hockey greats like Wayne Gretzky and Mario Lemieux. She scored a spot on Edina High School’s boys’ junior varsity team, but found the experience mixed. “It was hard for me because I’m quiet, don’t talk that much,” she remembered. “It was awkward for them, too. A lot of them were pretty great, though. It probably would have helped if I were more outgoing.”

When she sought a spot on the boys’ varsity team, however, Potter didn’t make it. She got the distinct feeling that girls weren’t welcome.

“The boys didn’t want me to play,” she said bluntly. The rejection fit with her sense of the school in general.

“In high school the popular kids were the rich, snotty types. I didn’t grow up with a lot of money,” she said. Potter’s dad was a mechanic, her mom a hospital custodian. “The girls were ‘girly girls’ who were cheerleaders, and the sports they played were tennis and soccer. I played hockey and football and dressed like a boy. I didn’t fit in; it was hard for me.”

Edina’s loss was the Minnesota Thoroughbreds’ gain. The Thoroughbreds are one of the top amateur girls’ hockey programs in the country. Joining the Thoroughbreds meant a more demanding training and game schedule, but Potter never balked. She went on to graduate in the top 4 percent of her class, ranked 15th out of 450.

That work ethic is something Potter hopes to pass on to her daughter. “When most people would quit, I keep going,” she said. “I don’t give up when it gets hard or if I’m tired. I work out every day except Sunday. I do what it takes.”

The summer after high school, the 5-foot, 4-inch Potter made the Olympic team. “I always loved to skate and play hockey. I’d play every day, sometimes twice a day. You do your best, you want to improve and the Olympics is the ultimate dream.”

That summer she also met her future husband—through hockey, of course. Both were participating in the Community Olympic Development Program (CODP), a partnership created by the U.S. Olympic Committee to develop young athletes. Potter was a counselor, her husband was a coach. “I got to know him over the summer and I liked him. He’s quiet, like me.”

He was also older, but she wasn’t deterred. “I asked him out,” she said.

When the U.S. women’s team defeated the favored Canadian team to win the gold medal in Nagano, Japan, Potter was the second youngest player on the team. Her parents were in the stands—sitting next to her idol, Wayne Gretzky, and his father. “It was … incredible,” she said quietly. “It was awesome being part of that. Being in the Olympics is something you grow up dreaming about. And then to win first place, the gold medal—it was overwhelming, I couldn’t believe it.”

Baby on board
A couple years later Potter got an unexpected but welcome surprise. She was pregnant. She played hockey through her fourth month and skated for fun until she was about seven months along. Maddy was born in January 2001. Potter rejoined the national women’s hockey team three months later.

Potter made the Olympic team again in 2002, and competed in Salt Lake City. In August, she was one of several players with ties to Minnesota named to the 2006 Olympic team. Though the roster hasn’t been finalized, Potter described her status on the team as “pretty much a lock.” This winter in Torino, one of her biggest fans will be one of the smallest in the stands. Potter expects Maddy, who will be five by then, to spend time bragging about her mom and making friends while Potter is on the ice.

She does know that she and her husband would like more children, and she’d like to help him build his business, a hockey training program newly named Potter’s Peer Hockey.

“I try to take things one day at a time,” she said.