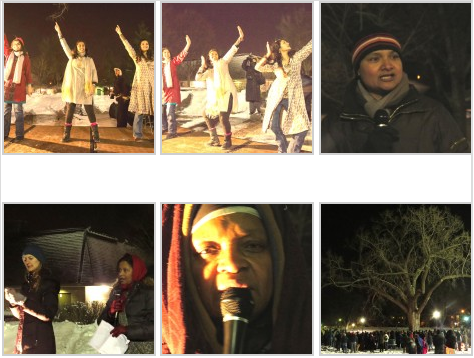 The One Billion Rising to End Violence Against Women: Twin Cities was the catalyst bringing hundreds of people together near the shore of frozen Powderhorn Lake on February 14th, Valentine’s Day at Powderhorn Park, Mpls

The event featured speeches from prominent local activists representing a cross section of social identity groups in the twin cities; including Elder Atum Azzahir [below]. Other items in the evening included a Bollywood dancers Rashi Mangalick, Divya Maiya, and Jinal Jhavari [above] from local artists from the Tapestry folklore dance group, a Fire dance by local performer FyreSnake, and a flash dance “Break the Chain” that has been part of the global movement was also featured. Local artists from Oya’s Radio opened the event with their soulful music. Hundreds of people, including young children braved the cold to participate in the events. There was infectious enthusiasm in the air as the crowds cheered, danced, sang and marched. The event ended with a march around Powderhorn Park. Hot food and beverages were provided to the crowds by Sisters Camelot.