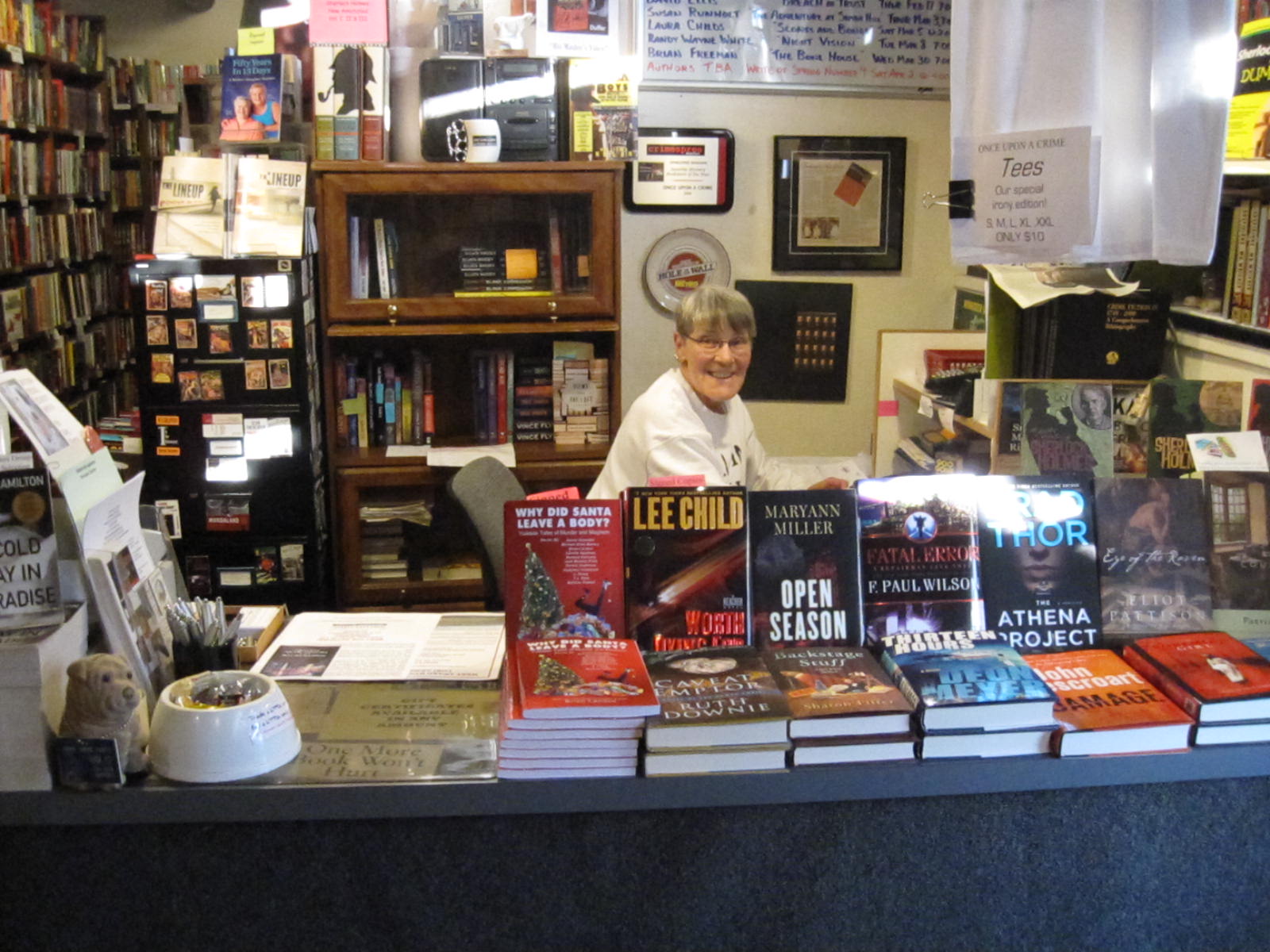 Pat Frovarp at Once Upon a Crime. Photo by Sheila Regan.

Once Upon a Crime, the independent mystery bookstore in Uptown Minneapolis, will be presented the Mystery Writers of America (MWA)’s 2011 Raven Award in April, and co-owners Gary Shulze and Pat Frovarp, who bought the 25-year-old bookstore in 2002, couldn’t be more pleased.

Frovarp said that about a month ago, she received a call from Larry Light, the executive director of MWA, informing her about the award. “I was stunned,” she said.

The Raven Award recognizes outstanding achievement in the mystery field outside the realm of creative writing, wrote Light in an e-mail response to questions for this article. MWA is a national organization for writers, fans, and publishing professionals who specialize in mysteries. The award, which will also be given to Centuries and Sleuths Bookstore in Chicago, will be awarded to Shulze and Frovarp at the MWA’s annual Edgar banquet in New York, in April.

“I’ve never been to New York in my life!” Frovarp said excitedly.

“Once Upon a Crime has done great service to the mystery community through its sterling promotion of the genre,” Light wrote. “It is open late to host signings of local and traveling mystery authors. Every March it holds an annual Write of Spring, where dozens of Minnesota mystery writers meet fans.”

Back in 2002, Schulze and Frovarp were dating while Frovarp was working at the store under the previous owner, when the opportunity came up to buy the place. Since the couple had started dating, they had collected mystery books like crazy—over 10,000 books between the two of them. They married on the fifth anniversary of buying the store. Only six people attended the ceremony, Shulze said, which lasted only a half hour due to the fact that it was held on the same day that the 35W bridge collapsed.

Shulze said there are less than a hundred mystery bookstores in the United States, and “Minneapolis of all places has two” (the other being Uncle Edgar’s on Chicago Ave), which he ascribes to “the wealth of mystery writers in the community.”

The specialty of the store has helped keep the bookstore alive in these rough economic times, Shulze said. “We can have an extensive collection in a small place.”

The two owners are also able to provide individual attention to their customers. “We have a pretty good knowledge of the books and of our regular customers,” Shulze said. “If a book comes in, we say, ‘Oh, Joan would like this,’ and we put it aside.” This type of hand selling is Shulze’s favorite thing about owning the bookstore. There’s one customer who comes to town only once or twice a year, and the owners help her pick out all the books she reads for the year, which amounts to a couple dozen.

The bookstore also supports mystery writers, especially local authors. “We just happen to like our mystery writer,” said Frovarp. “It goes without saying that we would support them.” When an author gives a reading at the store, for example, Once Upon a Crime takes the expense of mailing out invitations from the author’s mailing list, and serves wine and snacks for each reception.

The store has a whole bookshelf dedicated to local authors, and every spring they host their Write of Spring event, featuring all local mystery authors who are published. 2011 will be the event’s ninth year. “It’s good for the authors because it’s a lot of publicity,” Frovarp said. “They appreciate it; it’s our biggest sales day of the year.”

The MWA award is “an incredible honor,” said Shulze, who noted that past recipients of the award include Alfred Hitchcock and Bill Clinton. “We have fun, and it shows,” he said. “We enjoy authors.”