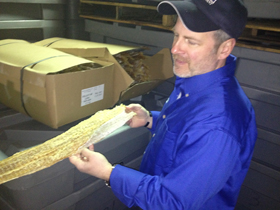 Chris Dorff, President of Olsen Fish Company, holds up the dried cod that will become lutefisk. (Photos by Shaina Brassard)

For those with no Scandinavian heritage, these may be curious terms, yet a mere block and a half off West Broadway on North 2nd St sits Olsen Fish Company, the world’s largest lutefisk processor and producer of what many claim are the best herring products around.

Olsen Fish has been operating on the northern side of Minneapolis since 1910, when it was founded by Olaf Frederick Olsen and John W. Norberg. From 1910 to 1998 it occupied a building in the North Loop on 5th Street North., just north of what is now Target Field. After finally outgrowing that facility, the company moved to North 2nd Street in 1998.

Both lutefisk and pickled herring are part of a long Scandinavian tradition of preserving ocean fish. Lutefisk is a Norwegian delicacy of reconstituted dried cod. The preservation process used to create lutefisk gives the fish a famed strong odor and delicate texture. Throughout the Midwest, hundreds of lodges and Lutheran churches host annual lutefisk dinners that attract thousands of Scandinavian-Americans.

Pickled herring, a more straightforward and less exotic food, is a white fish that has been preserved through pickling. Olsen uses a proprietary brine, or salt solution, made with granulated sugar. Olsen pickled herring also includes fresh onions and spices and comes in wine sauce, cream style and creamy Cajun flavor.

This hundred-year old company initially found success due to the fact that its core products met a Scandinavian niche market demand.

“Minneapolis was the epicenter of the Scandinavian population,” said Dorff.

Olsen has stayed successful because of its quality, natural products.

“We’re an old-fashioned company and product,” said Dorff. “A lot of our competitors are not focused on the same thing, so our product tastes and looks better, and when we start distribution in a new area, almost all of a sudden we get other stores calling us too.”

In markets hungry for high quality pickled herring, the product essentially sells itself. Dorff said that he doesn’t have a huge sales team.

“There are five of us in the office for the whole country,” said Dorff.

Olsen has been good at adapting to shifts in demand for lutefisk and herring.

“With each generation, lutefisk as a tradition is not being consumed with the same passion. But our pickled herring business has grown,” said Dorff. “It used to be that our market was primarily in the Midwest and even there, going back years ago, the grocery stores would not carry much herring after Christmas time, but when they started keeping it out throughout the year, people continued to buy it.”

“Now we’ve begun spreading our wings and some of my biggest customers are in South Florida, Seattle, Arizona,” said Dorff.

To this day, however, Olsen focuses much of its distribution on the local grocery stores that got the business to where it is today, such as Cub Foods, Supervalu and Festival Foods, small meat markets and delis, and of course, the churches and lodges that depend on Olsen when throwing their annual lutefisk dinner fundraisers. Ingebretsen’s longstanding Scandinavian store at 1601 E. Lake St. in Minneapolis in particular moves through a lot of product; during the winter holidays.

“There are lines out the door and around the blocks,” said Dorff.

Dorff said that he started working at Olsen in 1995, in the sales department, but that’s not the entire truth. His father was an Olsen salesman and during Dorff’s winter breaks while in college, he worked in the old downtown factory, so he truly knows the business inside and out.

Since he took on a sales position, business has continually increased. Compared to five full time, year round production workers in 1995, there are thirteen today, and during the busy, pre-holiday months of September through December it uses additional seasonal staffing.

Though the factory is hardly a glamorous place to work, Dorff happily notes that he has no turnover issues at all with his production staff. “The company has always had a history of taking good care if it’s employees, providing union wages, healthcare for workers and their families, and pensions. I’m very fortunate to have a long-term, veteran staff. It makes me not have to worry about that side of the business,” said Dorff. Every one of Olsen’s full time production staff has been there for between sixteen and 30 years.

In an example of just how transnational of a world we live in, a few years back, Olsen was approached by members of the local Nigerian and West African community and asked to procure a specific type of dried cod commonly used in soups and dishes. As word spread, the demand grew, and today Olsen imports upwards of 40,000 pounds of the fish each year. Dorff also acts as a resource to many of the small business owners that distribute the imported good.

Olsen Fish Company has proven to be a business with staying power, as well as a good neighbor. Its president expects to see them on 2nd Street and West Broadway in North Minneapolis for good.