Photos from Save Minnesota's #1 DQ Facebook group. Above, the building today. Below, in 1953; photo by Norton & Peel, courtesy Minnesota Historical Society.

A Roseville Dairy Queen built in 1947 may be in danger of demolition, according to the Minnesota Preservation Alliance, which named the building as one of their Top 10 Most Endangered Historic Places. According to MPA, the building’s owner is considering replacing the current building with a new one.

MPA calls the building, located on Lexington Avenue North near Larpenteur, Minnesota’s oldest Dairy Queen. MPA field representative Erin Hanafin Berg said that the building has the hallmarks of modernism prevalent in drive-up architecture from the get-your-kicks-on-Route-66 era. “The glass and prominent neon sign are classic features of Roadside architecture,” she said.

MPA was established in 1981 and has published its Endangered Buildings List for 17 years. Berg said that the DQ building has not yet been nominated for the National Register of Historic Places, but she believes it would be eligible.

Berg said that MPA received an anonymous tip that the owner of the building is considering demolishing he building. MPA has tried to communicate with the owner, and sent a letter to Plaza Shop Associates, who they believe own the building, informing them that MPA has nominated the building for their endangered buildings list. They have not received any word back.

Lynn Menturweck, who says she was the anonymous tipper’s source, has lived in the neighborhood since 1986. “I’m a frequent flier at the Dairy Queen,” Menturweck said. “And I love it very much.”

She said there is a lot of interest in Lexington and Larpenteur right now, especially in light of the possibility that a Walgreens will move in to the old Snyders space. People in the area are concerned about the increased traffic that would come along with pushing the commercial zone down Lexington. “Neighbors are very upset about the issue,” she said. “That whole intersection is a throbbing question mark.”

“That Dairy Queen is a real linchpin of community,” Menturweck said. “You can go up to Dairy Queen, stand in line, and you have a sense of neighborhood. It’s really a place where people are very happy together.

“I understand that it is a private business. What I would like to see is the business and the preservation alliance to find a way to renovate the building and yet maintain its character.” 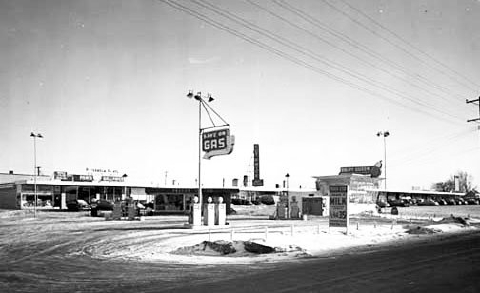 Jack DeCrans is the owner of the Dairy Queen franchise that leases the building. He says that the decision to demolish the building is not up to him, but a Pioneer Press article quotes him as saying the current building is “not energy efficient.”

Meanwhile, local resident Nina Clark has started a Facebook group called Save Minnesota’s #1 DQ. She said she saw the news about MPA’s list on a friend’s Facebook page and wanted to do something to save the building. “Me and my husband love going to that DQ,” she said. She said she is currently coming up with ideas to promote awareness of the issue, including a possible 50s day at the building, where people would arrive in 1950s clothing to create “a visual statement.”

Commenting on the Facebook group page, Bill Rosenthal pointed out that the building was used in the 2001 movie Sugar and Spice. Rosenthal, who worked at the threatened DQ for six years, wrote that his memories of the building include “‘peanut baseball,’ exploding machines, making a couple hundred Buster Bars at a time,” and “lines out to the street from 6 p.m. to 10:30 p.m.”

Clark has received support from prominent local DJ Jake Rudh, who founded Twin Cities Mid-Century Modern, a Facebook group for people who admire mid-century modern design.  Rudh recently was the DJ for MPA’s Anti-Wrecking Ball party in conjunction with the announcement of their Top 10 Most Endangered Historic Places list.

Rudh has been garnering support for the effort to save the building. “Let’s show some serious support for this cherished structure!” Rudh wrote on the Mid-City Modern page. Referring to the social media campaign that landed an 88-year-old actress a gig hosting Saturday Night Live, Rudh noted: “It worked for Betty White, let’s make it work for DQ!”