I was introduced to the Old 97’s by a woman named Lydia Bean, a singing sociologist from Texas. I introduced their album Satellite Rides to a different woman who I later fell in love with and lived with; I remember that the song “Question” was the most-played song on her iTunes. She and I don’t talk any more. The last time I saw the Old 97’s play First Avenue, I was dancing and sharing a beer with yet another woman, who I’d declared to be the love of my life. She and I don’t talk any more either, but there the Old 97’s and I were again on Sunday night at First Avenue, drinking beer and dancing. Their songs are like a well-made pair of boots: you can wear them through good times and bad, and they never wear out.

With snow falling thick and roads almost unnavigable, the weather conditions were, to say the least, adverse. Our photographer Kyle Matteson couldn’t make it out of his alleyway, and apparently neither could any other press: it was the first time I’d ever seen a show at that club where the photo pit was entirely empty. I had the space in front of the pizza counter—the spot where press, bloggers, and other music nerds normally gather—almost entirely to myself. Under the circumstances, the crowd was a pretty decent size, and Old 97’s frontman Rhett Miller thanked us after just about every song. “You are the coolest people in one of the coolest cities in the country,” he declared. “You were like, rock and roll? Snow? Rock and roll!” (Later, Miller thanked the designated drivers. “What does it matter?” asked bassist Murry Hammond. “They’re just going to be driving six miles an hour anyway.”)

Now 18 years into their career and still boasting all four original members (Miller and Hammond have both also released solo albums), the alt-country power-poppers are touring behind their 2010 album The Grand Theatre, Volume One. It’s a loose and winning set, though much less substantial and satisfying than 2008’s Blame It On Gravity, 2004’s Drag It Up, or their masterpiece Satellite Rides (2001). The band had fun with the new material, notably “Every Night is Friday Night (Without You)” and “Champaign, Illinois,” which Miller introduced by saying he’d [air quotes] “written it with” a guy from our state, Bob Dylan. (The song’s structure is similar to that of “Desolation Row,” a fact that I hadn’t previously caught.) The Old 97’s are not ones to hold back on fan favorites; the set and its single five-song encore featured a generous helping including “Doreen,” “Rollerskate Skinny,” and regular closer “Time Bomb.”

The snowed-in quality of the evening gave the show an appealingly intimate flavor, with Miller and Hammond taking plenty of time to banter about which one is taller (Hammond) and whether the Buzzcocks had ever played First Ave (Miller called for longtime club employee Conrad Sverkerson, who poked his head on stage to confirm that yes, they had). At one point Miller actually got down on his knees to chat with fans standing up front—because why not? The Old 97’s are timeless, and on Sunday night in particular, they had all the time in the world. 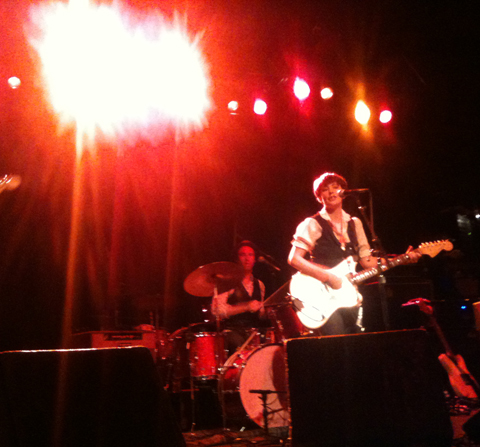 Opening the show were Those Darlins, whose hour-late start was explained by the fact that they’d just arrived from Chicago after driving 12 hours in the snow. They proved very much worth the wait: the young Tennessee quartet take the minimalist stomp of the Velvet Underground via the Violent Femmes via Bow Wow Wow via the All-Girl Summer Fun Band and smoke it with the twang of Hank Williams and the attitude of Hank Williams III. Sorry, Bocephus—I don’t hear you in there anywhere.