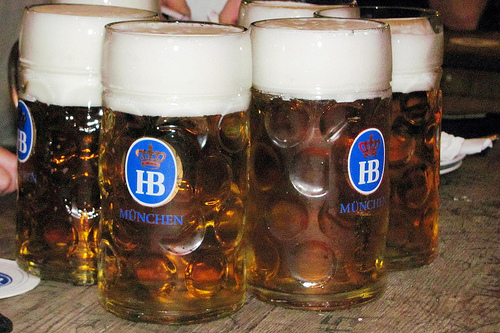 While there are a handful of lively Oktoberfest celebrations in the Twin Cities, the Black Forest Inn hosts, perhaps, the most distinctive festivities, with a ten day celebration that kicks off on September 28. If you’re in search of a weekend celebration, Gasthof’s on University Avenue offers a full bar and polka dancing over the next three weekends. The celebration started on September 21 and continues until October 13. Mill City Museum will host an event-packed celebration with lots of family friendly activities on Saturday, September 28, from 8 a.m. until 2 p.m. Festivities include a farmer’s market, local beer sampling, a barrel-making demonstration, and live music and dancers. There will also be a beer garden featuring local breweries and plenty of German foods to sample.

Across the river in St. Paul, festivities include Twin Cities Oktoberfest at the Minnesota State Fairgrounds October 5-6 at a pricey $25 per person — but there’s a $10 off coupon here.  The following weekend, Octobe r12-13, the KlubHaus on Rice Street celebrates, with festivities including dachshund races and bed races, as well as beer and bands. (Here’s a list of even more Oktoberfest celebrations in the Twin Cities and across Minnesota.)

The Black Forest Inn’s Oktoberfest celebration begins with a ceremonial keg tapping and a restaurant wide toast. Personal toasts are welcomed as the restaurant celebrates its long-standing community.

A few of Black Forest’s featured activities include a silent movie night, reunification night, Freudian slip night, and sure enough, featured beer deals every night, with limited supplies of logo glasses free or for a dollar on most nights. (Full schedule here.)

Among the most nostalgic nights is Grimm Night on Saturday, September 29. You might recognize Hansel and Gretel, Rumpelstiltkin or even princesses Snow White, Cinderella and Rapunzel strolling through the Black Forest. Employees and customers are encouraged to dress up as their favorite characters from these fairytales and customers may even request a Grimm story to be told at their table starting at 6 p.m.

Other nights you won’t want to miss include Socks with Sandals Night on Sunday, September 29. German tourists are known for wearing open sandals with socks. At 7 p.m., the Black Forest Inn will celebrate this by giving free socks and 15 minute pedal pub rides to anyone who follows this dress code.