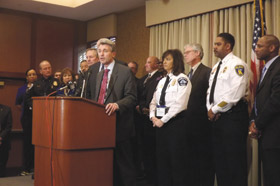 Minneapolis Mayor R.T. Rybak and mayors and public safety officials from throughout the Midwest rallied together in a call for stricter federal gun laws.

Rybak, along with Milwaukee Mayor Tom Barrett, hosted the Midwestern Regional Gun Summit that took place in downtown Minneapolis on Jan. 10. The two mayors were joined by mayors and officials from cities such as Kansas City, Des Moines, IA, St. Paul, St. Cloud, Duluth, Brooklyn Park and others, including the acting director of the ATF, B. Todd Jones – all seeking a solution to curbing gun violence that is plaguing the nation.

The summit was called more than a year ago, but the timing could not have been more ironic as the nation is still in the direct aftermath of the Newtown, CT, shooting that killed 20 elementary school students and six educators. That, on top of a shooting in Aurora, CO, where 12 people were gunned down and another 70 wounded; a shooting in an Oregon mall where two were killed; and a shooting right here in Minneapolis where five people were murdered in a mass workplace shooting. Many are now calling for stricter national gun laws.

But the convened group did not focus solely on the headline-grabbing mass shootings, but the daily shootings plaguing urban metropolises.

“This summit was planned about a year ago,” said Barrett. “Gun violence happens every day. It’s scandalous and grotesque. We have to do much more than we’re doing. But now the conversation is fundamentally different now that the president is saying this is a priority.”

This past Wednesday, President Barack Obama signed 23 executive orders on the issue of curtailing gun violence. 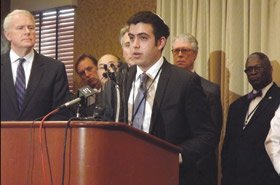 Left: Sami Rahamim, 17, son of Reuven Rahamim, who was fatally shot at Accent Signage in Minneapolis in, speaks out against gun violence during the Midwestern Regional Gun Summit.

“We can’t put this off any longer,” said the president in a released transcript from a press conference held in Washington, D.C. “In the month since 20 precious children and six brave adults were violently taken from us at Sandy Hook Elementary, more than 900 of our fellow Americans have reportedly died at the end of a gun – 900 in the past month. And every day we wait, that number will keep growing.”

Obama called for a ban on all military-style assault weapons and limiting gun magazine clips to 10 rounds or less.

“The type of assault rifle used in Aurora, for example, when paired with high-capacity magazines, has one purpose – to pump out as many bullets as possible as quickly as possible, to do as much damage using bullets often designed to inflict maximum damage. And that’s what allowed the gunman in Aurora to shoot 70 people – 70 people, killing 12, in a matter of minutes,” said Obama. “Weapons designed for the theater of war have no place in a movie theater.”

Barrett said our freedoms are at stake if we do not do something to greatly reduce gun violence.

“Everyone here is a freedom fighter and what we’re seeing in this country is people’s freedoms are being taken away when they cannot go to church safely on a Sunday morning,” said the Milwaukee mayor.

“The right to worship freely and faithfully, that right was denied to Sikhs in Oak Creek, WI. That right was denied to hoppers in Clackamas, OR, and moviegoers in Aurora, CL,” said Obama. “That most fundamental set of rights – to life and liberty and the pursuit of happiness – fundamental rights that were denied to college students at Virginia Tech and high school students at Columbine and elementary school students in Newtown, and kids on street corners in Chicago on too frequent a basis to tolerate, and all the families who’ve never imagined that they’d lose a loved one to a bullet, those rights are at stake. We’re responsible.”

The group of mayors and public safety officials also called for Congress to pass legislation closing a gun show loophole that does not require a firearm purchaser to submit to a background check. The president did the same during his D.C. press conference, held Jan. 16.

Rybak said though the mass shootings garner the headlines, the routine shootings in urban, mostly minority communities can no longer be tolerated.

“The day that we hear about a shooting in a certain area in the city and someone says, ‘We expected it there’ is the day we have lost.”