Chalk up a victory for free speech at the People’s Plaza (also known as the Hennepin County Government Center). OccupyMN’s protest signs are back and Hennepin County workers have relented in their attempts to take them down.

UPDATE: Hennepin County Commissioners passed new restrictions on Tuesday, November 8 – and Occupy MN protesters were talking about challenging them in court. See below for details.

Overnight last Friday, County workers had taken taken down OccupyMN’s signs and moved the encampment’s tables, food and everything else to the western side of the plaza. The reason given was the need to “winterize” the fountains and moving water in the plaza.

After initial dismay, the participants decided to recreate much of the infrastructure, setting up signs once again.

A face-off with county security was peaceably resolved after consultations with county commissioners and other staff members. Minnesota ACLU entered the discussion, suggesting an infringement upon the protester’s first amendment rights.

By Friday evening, the plaza was reorganized on the western side and activities resumed as usual. 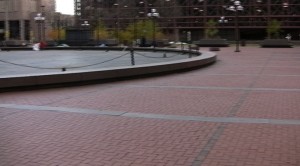 The Hennepin County Board of Commissioners unanimously approved changes to county building use policy – related, in particular, to the Hennepin County Government Center plazas, which have been the site of a protest demonstration by OccupyMN since Oct. 7.

Effective Monday, Nov. 14, the following procedures will be in effect on the plazas:
·        Individuals can demonstrate, assemble or otherwise use the plazas at any time.
·        No signs or posters (except those placed by the county) may be taped or otherwise affixed to county property.
·        No personal items or possessions may be stored or left unattended – if they are, they will be removed.
·        No one can sleep on the plazas or grounds.
·        No portable toilets will be allowed unless authorized by the county administrator, if necessary, for a limited time, if there is an expected large crowd for a particular rally, demonstration or event, or a maximum of one toilet because of an ongoing presence on the plaza after regular business hours.

The county has accommodated a number of protesters’ requests, including allowing people to sleep and store items on the plazas, providing access to electrical outlets and water, allowing public toilets, and permitting signs and posters on planters and other structures on the plazas.

Friday, Nov. 4, the county implemented routine procedures to winterize the irrigation system and prepare the plazas for winter, which included turning off water sources and requesting protesters to consolidate and reduce the size of their possessions in designated areas.

Several factors that were considered in changing the policy include:
·        Until now, the county has never allowed, nor has there ever been a long-term “occupation” of the plazas. This was a new and unexpected use of the plazas, which are not designed for camping or long-term occupation.
·        Minneapolis City Code Section 244.60 prohibits tents or other temporary structures on any public or private premises that are used as a shelter.
·        During the past month a significant number of personal items have been brought to and continuously stored on the plaza, and a number of individuals (generally 35 to 40) have been sleeping overnight.