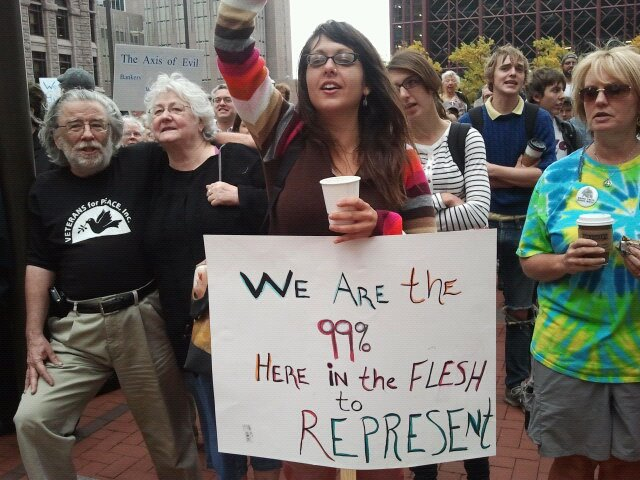 Hundreds of demonstrators gathered Friday on the Hennepin County Government Center plaza in downtown Minneapolis to protest the mounting wealth disparity in the midst of the economic crisis and the role of U.S. corporations.

The demonstration marked the first of an indefinite period of protests similar to Occupy Wall Street, which started three weeks ago in New York City. The protest spread to many major cities across the country, including Chicago, Los Angles and San Francisco.

Ventura condemned both the Democrats and Republicans for “ruining” the country. “I love my country, not the government,” he told the media. “They have created a system that is based on bribery. Hopefully what these people out here are doing will help to stop and turn around and take our country back.”

Supporters of Occupy Minnesota, like other “Occupy” movements across America, had a range of concerns, including mortgage crisis, unemployment and student debt. Many others said they worry about the government’s extrajudicial executions and torture.

However, all of their concerns “boil down to liberty and justice for all,” U.S. Rep. Keith Ellison, D-Minnesota, told the Twin Cities Daily Planet as he stood with demonstrators in shorts and sandals.

“One thing I really like about the movement right now is that it hasn’t broken down into specific issues yet,” said Rebecca Orman of Minneapolis. “I’m really turned on by that whole general sense.”

“We are the 99%” has become the catchphrase of the Occupy movement. In an explanation of the slogan, Terry Hughes said average citizens represent 99 percent of the American people, while the richest are only one percent. Protesters said they object to the concentration of the nation’s wealth in the hands of the richest one percent.  “This one percent has come at the expense of the 99 percent,” said Zach Zummallen, one of the organizers and a nursing student at Minneapolis Community and Technical College.

When President George W. Bush led the country into the Afghanistan and Iraq wars, the U.S. financial crisis unfolded, leading to a recession, which protesters said hit middle and lower class Americans harder while the richest benefited.

“We’ve been watching an economy that results in a few people at the top getting all the benefits,” said Minneapolis City Council Member Cam Gordon. “As everybody is working harder and harder, more money is just flowing into a few hands.”

Protesters’ outrage was fueled, Ellison said, by Bank of America, which early next year will start charging its customers $5 a month when they make purchases with their debit cards.

“After this country bailed them out, they laid off 3,000 people and want to charge people $60 a year,” Ellison said of Bank of America. This leads to more and more unemployment, foreclosure and student debt, added Zummallen. As one popular chant had it on Friday: “Banks got bailed out; we got sold out.”

Jackie Koury, a senior University of Minnesota student, stood at the demonstration with a sign that read: “We are the 99% here in the flesh to represent.” Her demands were clear: free education and student loan bailout.

Koury has more than $11,000 in student loans, and returning to school this fall to pursue her political science major could have just added to her debt. She decided not to go back to school for now.

“I couldn’t afford to go to school this semester,” said the 28-year-old singer-songwriter. “My financial aid was drastically cut. I don’t want to be an indentured servant for the rest of my life.”

Now, Koury has devoted herself to working two jobs to pay off her debt and make ends meet.

“We need to hold the corporations and politicians accountable for the hurt that they’ve done to us,” she said.

No arrests made in the protest

Protesters were bitter and angry at the government and corporations, but their anger was kept under control with no arrests reported.

Scores of Hennepin County officers watched the protesters while they gathered before the Government Plaza building. When demonstrators wanted to march in the streets, they were required to let authorities know about the time and place they wanted to march.

“The police have been supportive to us,” Zummallen repeatedly told the crowd. “Let’s be nice to them.”

At 2:00 p.m., protesters went for an hour-long march from the Government Plaza to the Federal Reserve Bank of Minneapolis with at least 80 Minneapolis police on bikes surrounding the march.

“We assisted people over. We let them have the streets. We blocked traffic. And everyone got here safely, and that was our goal,” said Inspector Kris Arneson of the Minneapolis Police Department. “Our goal is not to arrest people. For them to have a good First Amendment event is their right. And what we’re here for is to make sure that that happens.”