The Occupy Wall Street Movement that began in New York Sept. 17 and has since spread like wildfire across the world has made an undeniable impact on the social and political climate of the Upper Midwest. With various Occupy protest committees continuing to spring up across Minnesota and North Dakota, many working people in the region who, previously, might not have come together on other political issues say they have found common ground in the Occupy Movement.

Union, non-union, white collar, and unemployed workers are learning to work together towards severing, what protesters describe as, a dangerously cozy relationship between Wall Street and Washington D.C., that has undermined democracy in the United States and across the globe.

Collectively, Occupy Movement assemblies have intentionally refrained from making specific, official demands to redress their grievances. Instead, their organizing tactic has been to provide a democratic platform from which individuals can express their own grievances against Wall Street and/or Washington. Unsurprisingly, many people, who may have otherwise been divided by opposing issues, seem to share a common distrust of Wall Street’s influence on Washington politics. Consequently, Occupy Movement groups have been organically forming just about anywhere that you can find two people with a bone to pick with a bank, a politician, or both. These days, that’s a lot of people, in a lot of places. 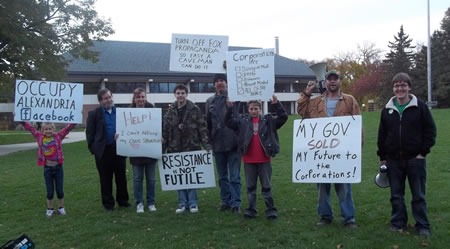 Wisconsin Occupy movements have materialized across the state from Green Bay to Kenosha, from La Crosse to Superior. In North Dakota, the state with the nation’s lowest unemployment rate, a budget surplus and the only state-owned bank in the country, there is “Occupy Fargo-Moorhead,” an “Occupy Bismarck,” and an “Occupy Grand Forks.” The specific issues that these groups have chosen to focus on are as diverse as the groups themselves. This diversity of grievances expressed in various Occupy locations has drawn criticism from some as evidence of a lack of focus within the movement. 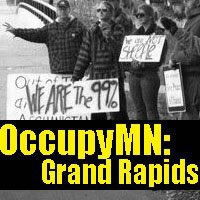 “Its obvious what we’re about,” responds Nathan Ness of St Paul, an OCW activist who has participated in Occupy Movement actions in Minneapolis, Duluth and California. “The Occupy Wall Street Movement is a movement protesting corporate greed. Corporate greed has many tentacles that people in the Occupy movement are focusing on. However, most of us agree that human beings, not corporations, should have the rights of personhood.”

Dave Bicking of Minneapolis, a former Green Party candidate for Minneapolis City Council, agrees: “Over the years, we’ve conducted countless demonstrations, lobbying efforts, boycotts – you name it, trying to get specific demands addressed. The problem is: nobody is listening at the top. The system is completely rigged against us.

In Grand Rapids, Minnesota, Mel Thoresen of Occupy Grand Rapids reports that, from his community, six people drove out to Occupy Washington D.C., to learn how the movement operates there and have been instrumental in organizing “Occupy Grand Rapids,” which hoped to have an articulated “points of unity” document drawn up last week. In the meantime, the group has coordinated with “Occupy Bemidji, as the first two towns on the Mississippi to conduct informational picketing on bridges spanning the river.

Organized labor has played an active role in participating in the Occupy Movement, though, according to Ness, has been respectful of the need to not be seen as attempting to co-opt the Occupy movement into its own campaigns.

Bicking seems to concur: “You know, I’ve definitely seen and felt the presence of organized labor at various events. The momentum from labor seems to be generated from the members, though, not from union staff. I’ve seen a lot of SEIU, AFSCME, and Teamster members down at the Peoples’ Plaza at various points (Minneapolis) and they have coordinated some amazing turn-out for some of the marches.”

On Oct. 14, the labor sponsored organizations, Minnesota Wants to Work, and Minnesotans for a Fair Economy joined with Occupy Minnesota to coordinate a rally and march in downtown Minneapolis that drew hundreds of people under the banner, “Don’t Foreclose on the American Dream.” View photos.

Bill McCarthy, president of the Minneapolis Regional Labor Federation wrote in The Minneapolis Labor Review on Oct. 28: “In the weeks since Occupy Wall Street began September 17, the youthful protestors, many of them students, increasingly have been joined in the streets by people of all ages and occupations, including thousands of union members.

“Nearly two dozen national unions, including the AFL-CIO, have issued statements supporting Occupy Wall Street  (for a list, see www.occupywallst-unions.org). To critics who would marginalize the Occupy Wall Street movement, these many added voices affirm, ‘we are the 99 percent.‘”

Paul Warren, a student at Metro State University, is an intern with Workday Minnesota.